Medals and scholarships awarded at the 2016 Chancellor’s Medallion Dinner 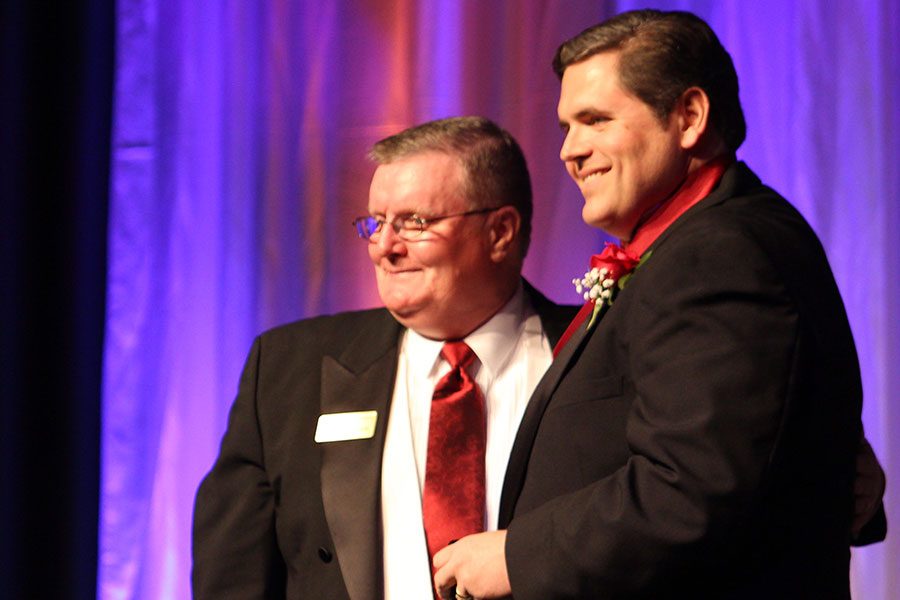 More than $140,000 was raised, seven scholarships were awarded and two prominent supporters of IU Southeast were recognized on Saturday, April 9, in front of nearly 600 attendees at the 2016 Chancellor’s Medallion Dinner.

The dinner, which took place at Horseshoe Southern Indiana, is held every year to honor individuals who give distinguished service to IU Southeast and the community with the Chancellor’s Medallion, to present scholarships to IUS students who have shown exemplary work and to raise money for the Chancellor’s Medallion Leadership Scholarship Program. The event also included silent and live auctions to raise money for the scholarships.

Patrick Shoulders and Ed Clere were recognized at the dinner as the 2016 Chancellor’s Medallion recipients.

Shoulders, a longtime IUS supporter, became a IU trustee in 2002. He is a past president of the IU Alumni Association and currently serves as director of the Indiana University Foundation. In the introductory video shown before his Medallion presentation, Shoulders was praised for the instrumental role he played in bringing the lodges to IU Southeast and its students.

Clere, who earned a Bachelor of Arts degree in sociology at IU Southeast in 1999, has served in the Indiana House of Representatives since his first election in 2008. He represents the 72nd district, which includes most of Floyd County, including New Albany. In February 2016, Clere sponsored a resolution congratulating IU Southeast on the 75th anniversary of its founding.

Clere said receiving the Chancellor’s Medallion was a tremendous, unexpected and humbling honor.

“When Chancellor Wallace asked me last year if I was going to accept, I was blown away,” he said. “You could have knocked me over with a feather.”

Blackwell said she was grateful for receiving the Chancellor’s Medallion Scholarship.

“I was pretty ecstatic,” Blackwell said.

Blackwell said that, beyond the scholarship, she was also looking forward to Cold Front’s performance that night. Blackwell said she is a member of Cold Front, playing tenor saxophone and flute.

Daugherty said she was excited about receiving the Chancellor’s Medallion Scholarship in 2015 and 2016. She said the scholarship, which awards a maximum of $6,000, has helped her pay for one full year of college, and she will have less debt because of it.

Daugherty also said the Chancellor’s Medallion Scholarship has shown her IU Southeast is the place she needs to be.

Beachler said she was at the mall trying to find an outfit for a job interview when she found out she received a Chancellor’s Medallion Scholarship. She said she immediately went home to let people know about the scholarship.

“I was actually breathless,” Beachler said. “My Fitbit skyrocketed. My heartbeat was 114 beats per minute.”

Beachler said the scholarship has paid for her Field Biology trip to Australia and will allow her not to have to pay out of pocket for school next year.

Vu said the sacrifices his parents made to help him get where he is made his scholarship award so meaningful.

“They worked so many weekends to provide for me so I could be here,” he said.

Vu said the scholarship will allow him the opportunity to forgo taking a job or an internship on the side so he can instead focus on the actuary exams he plans on taking in the near future.

Beyond the awards, the Chancellor’s Medallion Dinner served as an opportunity to recognize the university and its accomplishments.

During the event, Wallace spoke about some of IU Southeast’s recent accomplishments, including a major increase in online classes offered since 2012, a rating as the 12th safest college campus in the US by HomeInsurance.com and a top 100 ranking for the lodges on Niche’s 2016 Best College Dorms list.

Rosita Young, a member of the IUS Board of Advisors, said she supports IU Southeast because of the institution’s outstanding quality.

“You can get the greatest education there,” Young said. “Some of the best educators in the country are there. They provide an affordable education for the students and the professors really care about the success of their students.”

Thomas Wolf, professor emeritus of political science, said he has attended every Chancellor’s Medallion Dinner, and the 2016 dinner was the second one he attended without his wife, who passed away in 2014.

“This event used to be held in the Hoosier Room on campus, but it’s just grown,” Wolf said. “It’s been a wonderful way to honor people who have done good things for the campus.”

As the night’s festivities came to a close, Wallace expressed his joy over the event’s success.

“I am unbelievably happy,” Wallace said. “The amount of money given and the variety of people who gave to the university and its students bodes really well for the future.”