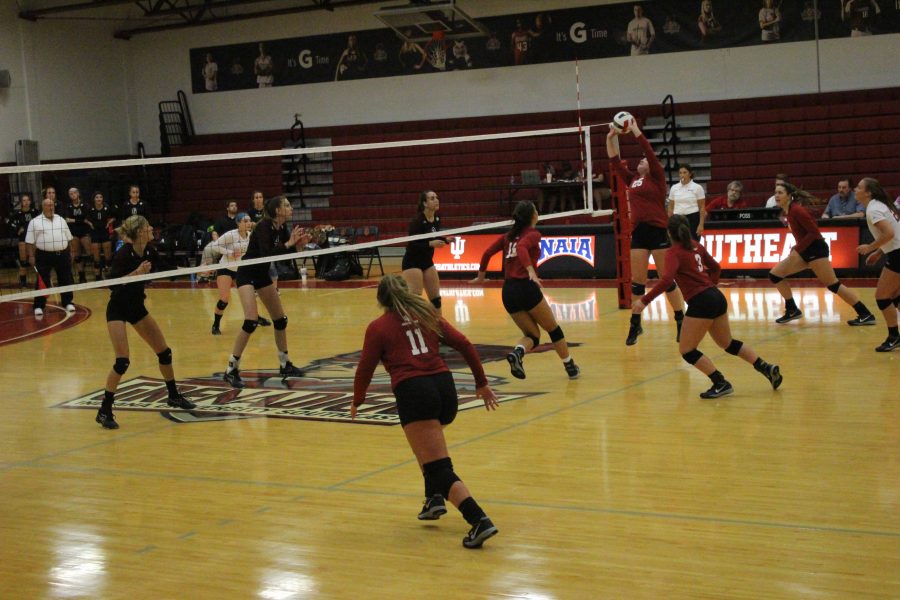 Intensity started to rise in the fourth set as the team quickly caught up with a ten point lead against Oakland with a score of 25-15.

With a tied score of 2-2 from the four sets, the teams went into the fifth set with the goal to reach 15. As the score got tighter and tighter the Grenadier’s won with a two point lead of 16-14, leaving their new record at 7-6.

As the team headed out of the locker room Coach Eric Brian had a lot to say about the intensity of the game, “The first half was not intense at all, that’s where we got in trouble,” Said Brian, “the second half was very intense and that’s where this team has the potential to rise to a challenge.” After coaches words Fischer in response says “Retweet.”

Before they play this team again in four weeks there is one thing the Grenadiers’ need to work on according to Caitlynn Pfaadt, “I felt like with setting also, in this game, we kind of mix it up a little, like Hannah Joly ran threes, Mary Dye ran slides,” Said Pfaadt, “The past couple of matches we’ve been running outside sets, we got to start changing it up or they’re going to figure us out.”

Before the teammates left the gym for the night they voiced their frustrations and spoke on things that helped them in the game, “I definitely got frustrated; one of my best aspects in volleyball is my serve and I probably missed like four or five serves tonight,” said Pfaadt, “and it’s not me.”

Fischer voiced her frustration saying that when they have fun in the beginning that is when they play better, but as the game goes on and the frustration emerges than that’s when the game is on, “I think it’s the opposite. I think when I get mad than I play better.” Said Fischer

After Fischer’s comments Coach Brian suggested an idea to just make the team mad so they can play better. That didn’t go over too well with Pfaadt and Fischer.

The Grenadier’s next game is in Cincinnati to play Cincinnati Christian University on Tuesday September 27 at 7 o clock.