In Search of a Great Meal 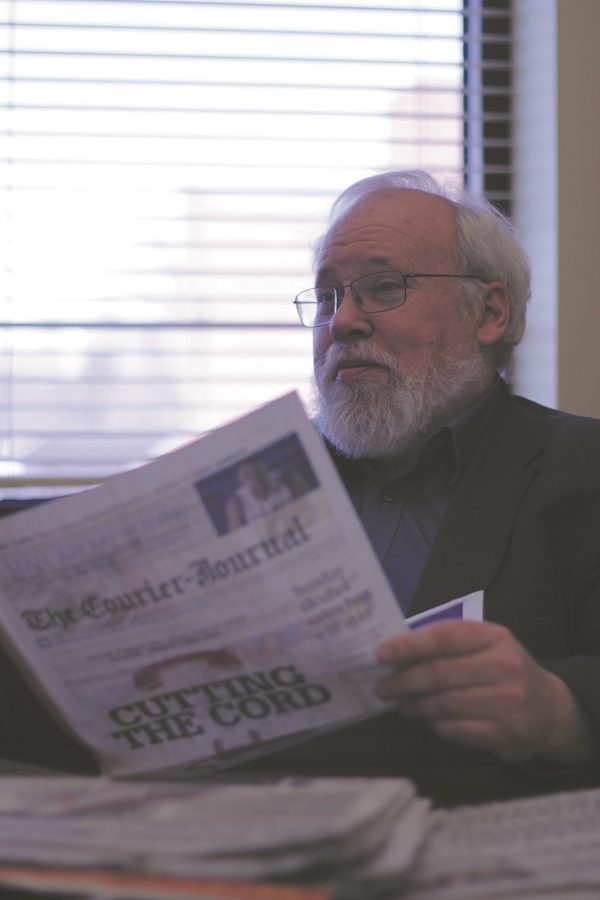 The glasses sparkle. The silverware shines. The grill sizzles and liquids bubble and boil within their pots and pans. The smells are like traveling salesmen, wafting through the air and beckoning you to discover the dish from whence they came.

This is the office of Marty Rosen.

Rosen has been at IU Southeast for 20 years and is currently its library’s director of library services. However, he is perhaps better known as the Courier-Journal’s longtime restaurant critic and columnist. From 2006 to 2014, Rosen discovered, sampled, and shared with his readers the best that Louisville and southern Indiana dining had to offer.

“Over the period I was writing about it, you could see a flowering of the dining scene in Louisville,” Rosen said. “You could certainly see a rising national profile so it was a fun beat to cover.”

There is a range of philosophies in the field of restaurant reviewing. Some publications, such as The New York Times, stick to the major restaurants and review them multiple times as seasonal menus are introduced and cycled.

Rosen reviewed his fair share of higher-end restaurants, the type that are greatly ballyhooed upon their opening. However, Rosen discovered many of the smaller restaurants he reviewed by hopping in his car and driving through areas with lesser dining profiles.

“I was always more interested in the next place,” Rosen said. “I’d rather go to Buechel and review a brand-new soul food restaurant then go back to Varanese six months after I reviewed it to try this season’s menu.”

Rosen acknowledged the other philosophy as perfectly valid but decided early on that his goal would be to map out the greater dining scene.

“I wanted to make sure I was covering all areas and all price points,” Rosen said. “What I enjoyed the most was discovering new places.”

Rosen approached his reviews in the same way an actor might approach a role.

“The act of reviewing is an act of imagination,” Rosen said. “I would imagine myself into the role of the customer.”

Rosen acknowledged the difficulty of this by pointing out that the same person is a different customer at different times. The customer grabbing a casual bite with friends is not looking for the same restaurant experience as the one taking someone out on a date.

“My goal was to evaluate the restaurant on what it was trying to do,” Rosen said. “You want to make sure you’re covering the range of techniques and ideas that a kitchen represents.”

As an example of this, Rosen conjured up an imaginary pub. This pub had a grill upon which burgers and grilled cheese sandwiches were made and a fryer where dishes such as fish and chips could be fried. If this pub were real, Rosen would make sure to order an item prepared on the grill and one prepared in the fryer. Salads and soups would represent two more of the numerous techniques a kitchen may be employing and would need to be ordered accordingly.

“You need to try enough dishes to get a sense of the overall qualities and strengths of a restaurant,” Rosen said. “One station may be very strong while another is inconsistent.”

This type of thoughtful approach would follow Marty out of the restaurant and onto the page of his review.

“Marty never just jumped right into the review,” said Jana John, who has been a member of The Courier-Journal’s features editorial staff since 2002. “He’d always start with a paragraph of context.”

John recalled examples in which reviews had begun with a history of the restaurant’s building or an overview of a genre of food.

“I always learned something from editing his pieces,” John said. “He knows a lot about some things and a little about everything.”

Sarah Fritschner, the former food editor for The Courier-Journal, was also quick to praise her former colleague.

“Marty’s a good reviewer because he’s a thoughtful writer,” Fritschner said. “He was very professional, dependable and incredibly fun to work with.”

Unfortunately, while he’d discover many great restaurants, Rosen’s position made it near impossible for him to find the time to return to them for the simple pleasure of their food.

“One of the problems of being a restaurant reviewer with a column every week is that every meal you’re eating out has to be a work meal,” Rosen said.

This sacrifice was appreciated by the many readers of his columns and by many of the independent restaurants toward which he would point those readers.

Chef Dean Corbett is the owner of two such restaurants, Equus & Jack’s Lounge and Corbett’s: An American Place.

“Marty was always very fair and knowledgeable,” Corbett said. “He was constructive in his criticism and he would back up that criticism with actual knowledge of food and the industry.”

Corbett said what impressed him the most about Rosen was the reviewer’s understanding that real people and their jobs could be at stake.

“He didn’t jeopardize people’s livelihoods for a clever line,” Corbett said. “He’d back up his reviews with hard facts. He always recognized that bad reviews could be the end of a restaurant.”

This power was something Rosen took seriously.

“It’s expensive to open a restaurant,” Rosen said. “You can’t just play around with those columns. I always told the truth, but I was also very conscious of the fact that there was someone on the other side of my column.”

“Marty was never out to tear anyone down,” Corbett said. “His consciousness and awareness is something that is sorely missed.”

Another thing Corbett said impressed him was Rosen’s ability to sense and address dining trends as they were beginning to bubble up.

“When you do this for a decade, you get a large base of knowledge to draw from, and you notice those trends,” Rosen said.

In 2013, Rosen, a musician at heart, started a folk band, Hound of the Buskervilles. By 2014 they were getting invites to play at restaurants. One such restaurant, the Monkey Wrench, was one Rosen had recently reviewed.

“I had a great reputation, and I don’t feel like anyone would have accused me of playing favorites,” Rosen said. “But I felt it may have created the appearance of a conflict of interest.”

Rosen was already beginning to wonder how long was too long to write a dining column.

“After a while, you run out of things to say about almost every dish on the menu,” Rosen said.

In Feb. 2014, Rosen gave notice of his impending departure from the Courier-Journal’s dining beat. Now Rosen devotes his off-campus time to his band and to the theater reviews he writes for the LEO Weekly.

Although he no longer reviews its restaurants, Rosen’s shadow continues to loom large over the Louisville restaurant scene. His reviews remain the only ones from the Courier-Journal on many of the city’s restaurants. They can still be found online by those discerning diners seeking a good restaurant for the night.

“Everybody reads dining because everyone eats,” Rosen said. “Everyone is looking for a good meal.”