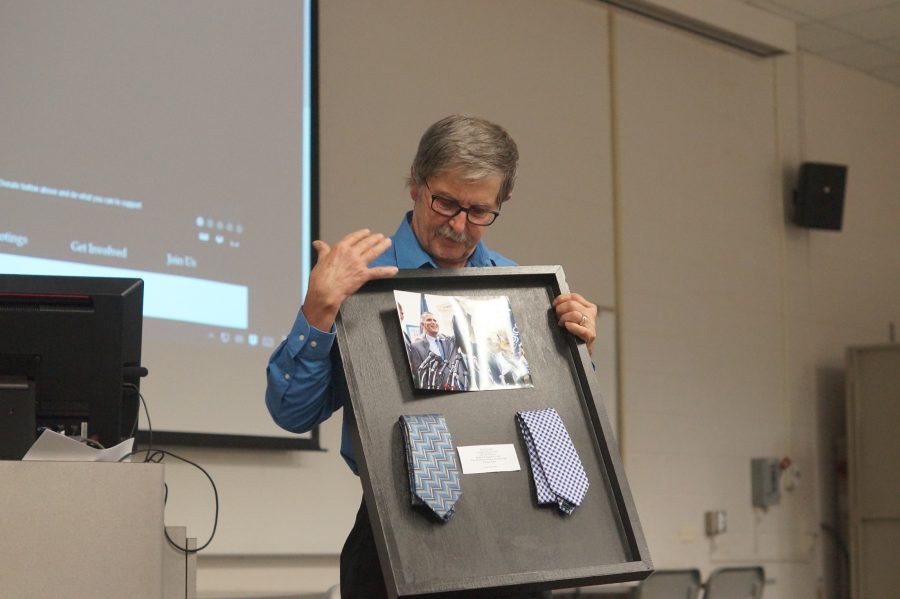 As part of LGBT History month, Spectrum, an IUS organization who raises awareness for LGBT in the community, hosted the LGBT History Month Panel in Hillside Hall on Oct. 25 at 7:30 p.m. The meeting was open to IUS students and the surrounding communities.

De Leon and Bourke began the evening speaking about their fight for marriage equality.

The two Kentucky natives met in 1985 and have been partners for over 30 years.

De Leon and Bourke are proud Roman Catholics and credit their faith and their families support for keeping their relationship strong.

De Leon and Bourke were unable to legally wed in the United States, so in 2004 the duo went to Canada to make their marriage official.

On July 27, 2013, the couple filed for marriage equality in Federal District Court, being the first to challenge a southern state.

“We only were asking for our marriage to be recognized,” De Leon said.

The case was then taken to the supreme court were the duo provided an oral argument on their case.

De Leon and Bourke happily announced that the Supreme Court overturned the sixth circuit allowing the two to win their case.

On this day in July, De Leon and Bourke got to say that marriage equality was granted for all states in the United States.

“The crowd erupted on the Supreme Court steps, it was so surreal,” De Leon said.

The two were named the 2015 persons of the year for the National Catholic Reporter.

Sheri Wright was next to speak to the audience about the mass murders that have taken place throughout the LGBT community.

Wright wrote and produced, “Tracking Fire,” a documentary film about the 1973 arson fire at the Upstairs Lounge and the 2016 mass shooting at Pulse Nightclub in Orlando.

The film began production originally only covered the Upstairs Lounge fire. She said the fire killed 32 people and injured many more.

This event was the largest LGBT mass murder in history.

“We traveled to New Orleans 6 times,” Wright said. “The more we went, the more people willing to talk came forward.”

During production of the film, the shooting at Pulse Nightclub occurred making it the largest LGBT mass murder resulting in 50 deaths.

Wright said she wanted to include the Pulse shooting as part to educate the public that there are still issues in the acceptance of the LGBT community.

David Williams, curator of the Williams-Nicholas LGBTQ Archive at the University of Louisville, shared his own experience of growing up as a white gay child beginning in the 1950s.

Williams said he first realized he was attracted to men when he was about 10 years-old.

He said during the time he grew up it was seen as a mental problem to be gay. He spoke of the challenges he faced with being acceptable by his peers and family.

“I always knew I was different, I just never understood how to explain it to others,” Williams said.

Williams proudly speaks of the archive collection he has helped put on display at the University of Louisville.

He encourages everyone to visit the archives located at the bottom floor of the Williams F. Ekstrom Library at the University of Louisville.

Elizabeth Gritter, professor of history, educated the audience on Harvey Milk, the first openly gay person to be elected into a California public office.

Milk became a member of the board of supervisors for San Francisco’s district five in 1977.

He was known for his over the top campaigns that attracted the attention of voters.

Gritter said Milk was mostly known for being an advocate for gay rights.

In 1978, Gritter said Milk was responsible for the Gay Rights Ordinance, which protected people from being fired from their jobs for being gay.

Michael Abernethy, lecturer of communications studies, closed the evening speaking about  how the LGBT community has been evolving over time.

Abernethy spoke about important LGBT community members that have shaped people’s everyday lives in the arts, music and literature worlds.

Abernethy spoke about the pride that the Louisville community holds through support, parades and public figures.

“I’m sure there is someone out there trying to form a winter parade,” Abernathy said, joking about the extreme amount of LGBT pride.

A photo of the United States White House flashed upon the screen with bright rainbow colors beaming off the building.

“Never in my life did I think I would see the White House of the United States light up in rainbow colors to celebrate my community,” Abernethy said.

According to Spectrum, “The LGBT community is the only community worldwide that is not taught its history at home, in public schools or in religious institutions. LGBT History Month provides role models, builds community and makes the civil rights statement about our extraordinary national and international contributions.”