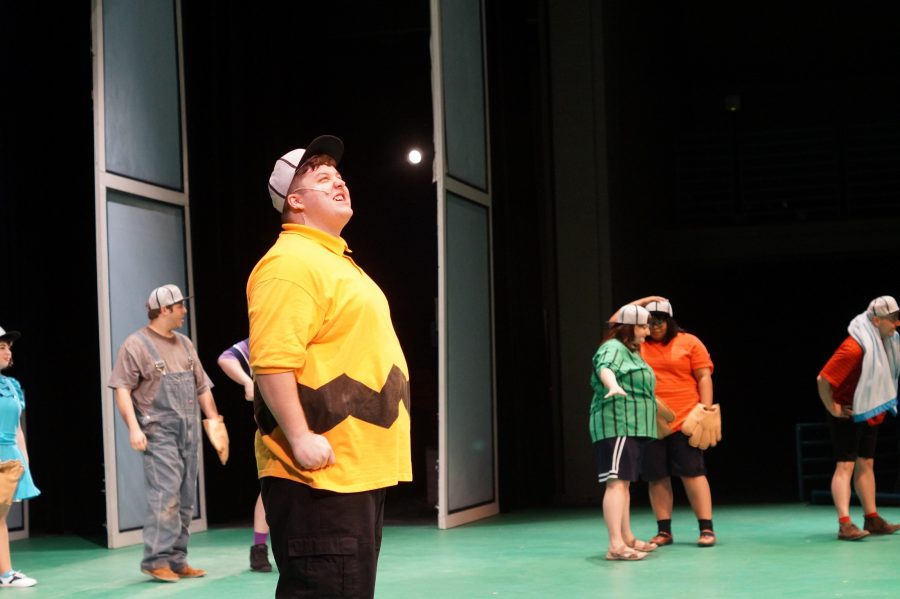 The production opened Thursday, Nov. 3 at 8 p.m., transporting the audience to the comic strip based on Charles M. Schultz, “PEANUTS” and the play, music and lyrics of Clark Gesner.

The show follows the daily life of the “blockhead” Charlie Brown, as he tries to convince himself that he has self worth.

Charlie Brown, played by Jareth Gaddis, music education freshman, has found himself in love with the cute red-headed girl, eating lunch alone and not receiving a valentine card.

“Let’s see what I got,” Charlie Brown said. “Peanut butter. Some psychiatrists say that people who eat peanut butter sandwiches are lonely. I guess they’re right.”

Jordan Stevens, business freshman, saw the musical for the first time during its opening performance.

“The story really told of the struggles that we all face growing up, like acceptance and being able to feel wanted in a group,” Stevens said.

Stevens sympathized with the characters as they tried to understand the realities of the world outside of their playground.

Ashley Wallace, a visiting assistant professor of theater and performance at IU Southeast, directed the production.

“Despite its seeming simplicity, the characters help us investigate some of life’s deepest questions,” Wallace said. “ How does one maintain hope in the face of disappointment and self doubt?”

Charlie Brown and the rest of the Peanuts gang took the audience through a hilarious trip through what seems to them as the difficult life of a 5-year-old.

Along the way Charlie Brown tries learn of his true character. According to Linus, “After all, science has shown that a person’s character isn’t really established until he’s at least five years old.”

Although the cast may not be the same pint size versions as the original characters, the fun and childhood magic that is the Peanuts gang can be felt throughout the audience with the laughter that filled the auditorium.

According to a quote from The Ogle Center, “None of the cast is actually six years old. . . but this doesn’t seem to make that much of a difference once we are into the play, because what they are saying to each other is with the openness of that early childhood time.”