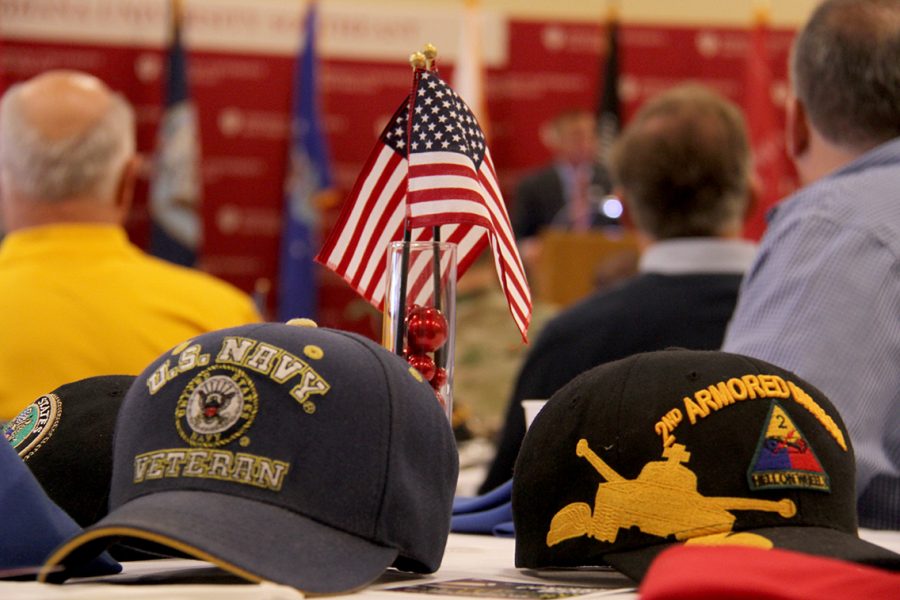 All branches and ranks of military veterans were honored at IU Southeast campus on Friday, Nov. 11. A luncheon was held in their honor in Hoosier Room east.

“Attention!” rings through the air. Men in uniform walk through the crowd carrying the American flag. Another command is called and they come to a halt and salute. Flags at half mast representing the men and women who have fought and died for their country.

On Friday, Nov. 11 at 11:15 a.m. veterans, students, faculty & staff and members of the community gathered in McCullough Plaza to honor veterans from all branches of service, including IUS student veterans.

Eleven veterans formed a half circle and, as their names were called, stepped forward and gave their title and what war they served in. These wars ranged from Vietnam to the current war in Afghanistan.

The crowd all wore poppies in remembrance and Chancellor Ray Wallace read the poem, “In Flanders Fields” written by Canadian Lieutenant Colonel John McCrae. The poem was written during the first World War and is about McCrae’s observation of red poppies growing on the graves of soldiers.