Project AHEAD Gives Kids a Chance to Expand Their Minds 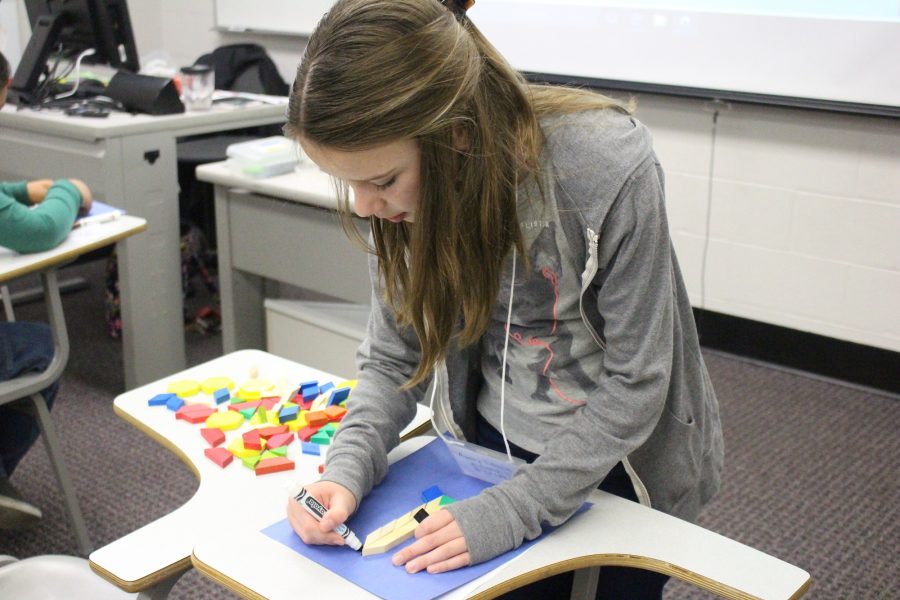 A student working on geography by tracing blocks.

The IU Southeast college campus turned into an elementary and middle school Saturday, Nov. 12 with students from Indiana and Louisville during the Project AHEAD event that took place in Knobview, Crestview and Life Science buildings.

Project AHEAD is a four week event that includes different workshops for young intellectuals. Challenging  their brain development at a higher level than they would normally experience in their regular classes.

One of the workshops that took place in Knobview was called Mouse Trap. In that work shop, kids didn’t build any ordinary mouse traps. They would use things like cereal boxes and paper towel rolls to build more complex mouse traps.

Although these kids were at these workshops to challenge themselves, Quinn, a participant in the Mouse Trap workshop, said they found enjoyment out of the couple days they were there.“You get to see how life kind of works,” Quinn said. “All you’re really doing is something simple and sometimes it’s kind of dumb, but sometimes you kind of want to do something dumb.”

Jessica Baker, one of the elementary teachers at Project AHEAD, said workshops like this, where the kids can work together and do problem solving exercises, helps challenge the kids, whereas in a regular classroom, it wouldn’t be as much.

“I’m a regular ed classroom teacher and I know it’s difficult for them to do activities like this in the classroom setting,” Baker said “With the attention and detail that all kids would need. These workshops, in the smaller class sizes, allow them to engage in some of those problem solving techniques that I wouldn’t be able to enact as authentically in the classroom.”

With this workshop, the kids worked together to build unique structures out of different materials.With this came teamwork, which Baker said is one of the most important things young kids should learn early on in life.

“There’s so many different parts and pieces to it that they have their clearly defined role,” Baker said. “They all know what they’re working on. I think that is a problem that kids often struggle with, and it teaches them how to disagree respectfully and listen to other people’s ideas.”

The kids said the best part about being in these workshops is that they get to socialize and work together unlike their regular classes at school.

“I think it’s fun,” one of the kids in the math workshop said. “The best part is when we got to do the codes and decoding messages.”

Shanda Wen, a high school teacher, said the workshops the kids were in gave them a little more freedom to express themselves.

“They can have fun and they’re not forced to sit at a desk with pencil and paper,” Wen said.

Although the purpose of these workshops is to challenge the young minds, some found they learned as they went along.

“It’s more as a you learn as you go,” one of the kids in the math class said.

Joshlyn, a student in another math class in a older group, said the most interesting thing she learned while she was at Project AHEAD was how to stay on budget.

Alisha Anthony, a teacher in the Jefferson County Public School system,  said she noticed how engaging the programs were for the kids.

“You have a lot more freedom and you can invent things,” Anthony said “It’s higher level thinking, just a little better than being in a classroom where it’s more structured, where you have to do this, this and this.”

Anthony said her strategy for the workshop was simple and to the point.

“We find something creative for them to do and just let them do it,” Anthony said.

Anthony said giving kids the option to either work as a group or alone is something that should be implemented into a regular classroom, as supposed to where students are forced to work together or alone.

“That’s the best part about it, giving kids the option and the freedom of how they work best,” Anthony said. “We have standards that we are working with, but we are working with a lot more freedom. So it seems to be a lot easier. I like it better than a normal structured classroom.”

A Bradie Shrum Elementary art teacher who was in the workshop Superhero Selfies, said she felt that the students don’t get enough interaction with each other, and something like Project AHEAD lets them socialize.

“So far what I’ve heard from all of the students is that they don’t usually get to do this in their regular classrooms,” the Bradie Shrum teacher said. “It’s a lot more structured. Where as this is laid back with them. I allow them to get up and talk.”

She said something that helped her during this workshop was that she didn’t have any certain rubric to follow.

“It’s not for a grade,” the Bradie Shrum teacher said. “Whatever they imagine, and whatever they feel like, they just do it.”

The Bradie Shrum teacher said the pressure of the Indiana state standards is something that is a big concern for young students and the stress they face everyday.

“There is definitely pressure from the state to follow certain curriculums,” the Bradie Shrum teacher said. “It’s hard. They absolutely need free time, if only for thirty minutes to give their brain a break.”

“I feel really old because everyone is older which makes me feel old,” the student said.

For students, faculty or staff member that have children, Project AHEAD is offered every year during the fall and winter semester. The link for registration is on the School of Education page on the IU Southeast website.