A little taste of Cuba

Leonardo “Leo” Lopez sits at Habana Blue’s bar going through paperwork. To his left, one of the restaurant’s employees prepares the linens and utensils for what they hope will be a busy day of business.

Habana Blues, located at 320 Pearl Street in New Albany, was opened by Lopez in 2010. Its specialty is Cuban tapas, which Lopez described as a Spanish concept of ordering smaller portions, allowing the focus to be less on the meal and more on sharing and socializing with your fellow diners.

“With the concept of tapas, it is more like a social [experience] where you come with your friends and you hang out,” said Lopez. “You make it fun so [customers] order different stuff and share it.”

Although Lopez owned and ran the business for several years now, his journey to success has been years in the making.
Growing up in Cuba was difficult for him because of the country’s poverty.  It was difficult for his family to earn a living and he knew early on he eventually wanted to come to America.

So, he and nine friends began building a raft to prepare for that trip. The raft was built from a wood pallet and painted in a deep burgundy. Black metal      barrels were attached to serve as seating on each side of the raft.

When he turned 18, Lopez set out on what would be an 18-hour voyage to America.  Eventually, they were picked up by the coast guard and taken to Guantanamo Bay. There, they were detained for a full year and a half before being moved to Miami, where he was united with his father for the first time.

A replica of the raft that carried him to America now sits in the restaurant. It lives in a roped-off seating area and shows his customers how far he has traveled.

Once he made his way to Miami, a harsh reality set in.  He said finding work with adequate pay was extremely difficult because he did not speak English. He worked several odd plumbing jobs with his father but found surviving on $5.50 an hour to be virtually impossible.

He remained close to several of the friends he met while detained in Guantanamo Bay that had relocated to the Southern Indiana area. They mentioned to him that, if he moved here, they could guarantee him a job.

In December of 1996 he packed up and moved to Louisville. 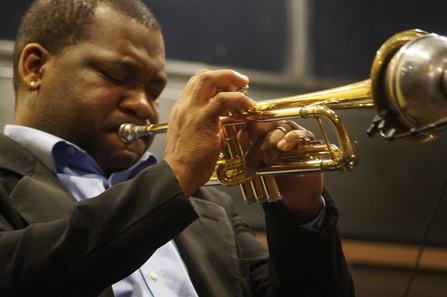 Lopez worked a couple of different jobs, but said working as a bartender for a friend who owned several restaurants inspired him to open his own restaurant in 2010. Four years later he converted a 6,000 feet renovated bank into a restaurant and the current Habana Blues Tapas Restaurant was born.

Stepping into the restaurant, one is immediately greeted with the sounds of Latin music playing overhead.  There is a blue 1951 Chrysler Plymouth located in the center of the restaurant, reminiscent of the 40s and 50s model vehicles still driven in Cuba today.

Other hints of blue can be found throughout the restaurant, from the blue and white striped awning outside the building to the table linens and blue-rimmed glasses. Blue pendant lamps hang above the tables and blue marble tops the bar. The wall murals are painted by Raphael Mophie, a local Cuban artist who’s other artwork in the restaurant can be purchased by interested customers.

There is a open dance floor where live bands perform weekly and free salsa lessons are given on the first Thursday of each month to all levels of dancers.

Luis Arduz, one of the dance Instructors, said everyone out on the dance floor is just “trying to have a good time.”
“They’re trying to feel the music, and be connected with someone, so you have to start somewhere,” said Arduz.  “As long as you take your first step, you’ll be getting somewhere.”

Cassandra Warren, a Havana Blues employee, highly recommends the Salsa Night as a fun, free family event.  She said children are welcomed and even those who have never danced before will enjoy it as the environment encourages all levels to participate.

“Over here you can do the Tapas or entrees,” Lopez said of the restaurant’s menu.

Initially, the biggest challenge for Havana Blues was teaching its new, non-Cuban customers the concept of tapas.  They did not understand the concept behind the small portion sizes and often complained it was not what they were used to receiving in other restaurants.

Now that people understand the concept, Lopez said, “They don’t want me to mess with the menu.”  He added that the tapas allow him get creative and people can order different flavors and tastes, which keeps them from getting bored with their meal.

Ulyses Garbey, Havana Blues employee, explained that the best thing about working here is that it feels like family. He explained that being able to provide a homemade Cuban meal for people to experience and enjoy makes those all feel like winners.

Keisha Kohler and Allison Thomas, customers of Habana Blues, have been coming to the restaurant since it was in its first location.

“The old location was great but this one is even better,” said Thomas.

“We like the food, the ambiance, and the dancing,” Kohler said. “I’ve been coming for the last couple of months to Salsa Night because most places do not have this type of Salsa dancing.”

Both ladies emphatically said they would coming back.

“We are able to provide something very unique for the New Albany community,” Garbey said.

Habana Blues Tapas Restaurant menu and hours can be found on their website. ​​

This story is part of the Authentic Southern Indiana project, produced by the Multimedia Journalism Storytelling class at IU Southeast during Spring 2016.