Moore Than Your Average Student 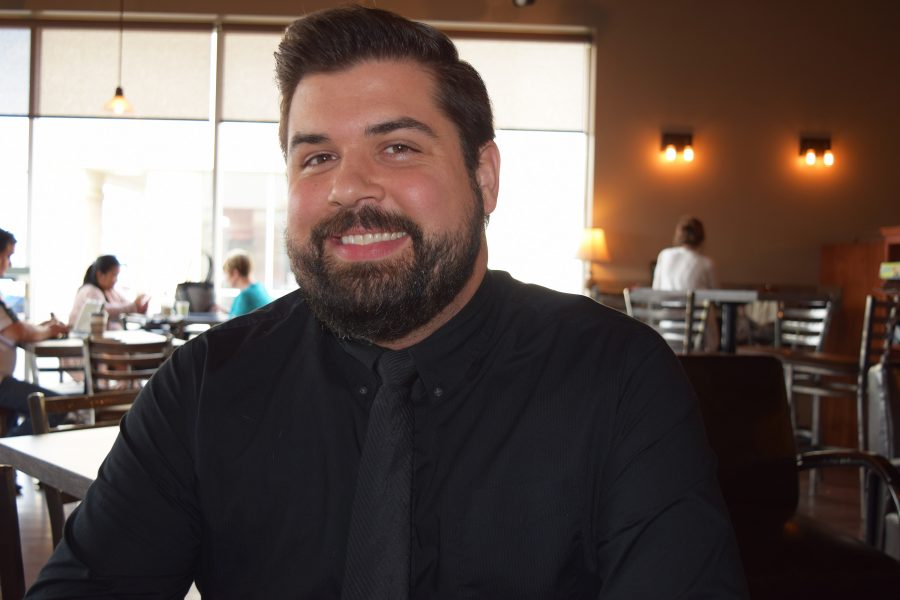 "He brings a very stable outlook on our campus as a community. I listen to him because he is a voice of well-reasoned, well thought out experience. I think he's top drawer." -Chancellor Ray Wallace

Driven, focused, organized and leader. All are words used to describe Nicolas Moore by the faculty, staff and students who have worked with him on various projects in the last several years.

Moore is a marketing and professional sales senior who is set to graduate this May. He has organized a variety of events and has been an active officer and member of Spectrum (formally known as the Gay Straight Alliance) during his time at IU Southeast.

Most of the events and organizations Moore has been involved in have had one common mission: to advocate for diversity.

Moore said his advocacy stems from when he was bullied for being gay throughout high school. More so, he said it stemmed from having to work through some personal issues that resulted from that experience as a young adult.

“What I learned was that most healing from that came from taking pride in my culture, in my LGBT culture,” Moore said.

According to Moore, one of his primary goals has been to help others feel proud about who they and where they come from.

“There is a happiness, a solace, and just a power that comes from accepting who you are,” Moore said.

Throughout his adult life, Moore said he was fortunate to have had the opportunity to travel to several different countries and study several foreign languages and cultures.

“It’s kind of astonishing when you see how relative your normal is,” Moore said. “It makes it easier to come back and find out ways to reconnect with people and celebrate diversity.”

Moore said one reason he has accomplished what he has is because he sees that we are all part of different diversities and communities. He said he enjoys being part of a movement for others to see the world in the same way.

Michael Abernethy, senior lecturer for the department of communication studies, has been the faculty adviser for Spectrum for more than two years. He has gotten to know Moore through both Spectrum and from when Moore was a student worker in the offices of the School of Arts and Letters.

“Nicholas is very driven and task-oriented,” Abernethy said. “When he sets his mind to accomplishing something, he is relentless in seeing it through. He has great ideas, and his focus isn’t just about himself; it is often about meeting the needs of others.”

Moore has been the co-director of Glitter Fever since 2014, and this year will be his last opportunity to help put it together. Glitter Fever is the annual drag show held on campus and is one of the biggest events for Spectrum.

Moore said putting the show together has been a lot of fun and each year they try to infuse more education about the Lesbian, Bisexual, Gay, and Transgender culture into the event.

According to Moore, Glitter Fever is not just about drag queens dancing on the stage; it is about inviting people from the community to take part in the LGBT culture.

Veronica Medina, assistant professor of sociology; former co-director of the campus Common Experience program; and former Spectrum co-advisor, met Moore when she was a guest judge for the show in 2015.

“Nicholas is a tireless advocate for the campus LGBTQ community,” Medina said. “[He] has worked extremely hard to professionalize and grow the annual Glitter Fever Drag show that is hosted by Spectrum.”

She said after Glitter Fever, Moore approached her to pitch the idea of bringing Pennsylvania State Rep. Brian Sims to IU Southeast to speak to the student body.

“Nicholas is, by far, one of the most proactive and organized students I’ve ever worked with,” said Medina. “When he approached Common Experience about Rep. Sims as a possible keynote speaker for our program, he came fully prepared to achieve his goal.”

According to Moore, putting together the event “Decision Making & Diversity with Brian Sims” took over a year. He collaborated with more than 17 entities between IU Southeast and IU Bloomington to fundraise more than $11,000 for the event. He also designed and implemented a four month, 49-step marketing plan to advertise for the event. Then he orchestrated a live streaming of the event to IU Bloomington and several locations in the Kentuckiana area.

“You can put on an event, no problem,” Moore said. “But if you want to change people’s perceptions or practices, or inspire a change in an educational environment or community, you need to work together.”

Another accomplishment that Moore is proud of was being selected for the Chancellor’s Advisory Council on Diversity, of which he is still a member.

According to Chancellor Roy Wallace, the council brings together a diverse group of people to talk about how the university can improve on diversity activities and overall diversity on campus. He said it is an ongoing, long term committee across sectional communities that are part of IU Southeast’s entire community

“He brings a very stable outlook on our campus as a community,” Wallace said. “I listen to him because he is a voice of well-reasoned, well thought-out experience. I think he’s top drawer.”

Moore said it is exciting to be a part of the council and he learns a lot from his fellow council members.

“It’s really flattering to be nominated,” Moore said. “I’m happy that I can be in those meetings, in those rooms, discussing not only where we are now [in terms of diversity] but what we are going to do moving into the future.”

Moore said it was exciting to see IU Southeast march in the Inaugural Jeffersonville Pride Festival in 2016, of which he was the marketing director. According to Moore, it was the first time the university marched in the Pride festival.

Moore said he does these events because there is a very altruistic component to it.

“I feel like I am helping a community of people where there is a need for advocacy or education,” Moore said. “I feel like what I am doing, in some way, is directly helping to make the community better.”

Moore receives inspiration and advice from his mentor Craig Sherman. Sherman, now retired, was the president of an organization called Junior Achievement and the Kentucky Council on Economic Education.  During his career he was an entrepreneur in both the publication and restaurant businesses. Sherman is still an active member of Louisville society and hosts multiple fundraising events annually. Moore has volunteered at several of those events.

“I have put [Moore] in charge of things and each time he has surpassed my expectations,” Sherman said.

Sherman said what impresses him most about Moore is that he takes on leadership roles and makes things happen.

“He definitely possesses qualities that will make him an outstanding individual and a real leader in the community,” Sherman said. “One that will make a real difference in the fabric of Louisville and the greater Kentuckiana area.”

According to Moore, his original plan after graduation was to go into marketing, but his plans recently pivoted in another direction.

Moore said he was recently working at an advertising agency and he did not feel fulfilled.  He said he learned that while he enjoyed the administrative tasks of the job, he felt it was missing the human service component he got from working together with faculty, staff, and students on committees and events.

“What most impresses me about Nicholas is his ability to build relationships on campus and appropriately advocate for students,” Stonecipher said.

Moore said after giving it a lot of thought, he decided that working for others and being inspired was just as important to him than money. His new plans are to obtain a graduate degree from University of Louisville’s College Student Personnel program, with the goal of working in student affairs at a university upon graduation.

“I could find a way to be inspired everyday working in student affairs,” Moore said. “Because I would be able to see who I was helping and really believe in the mission of education.”