How politically involved are IUS millennials 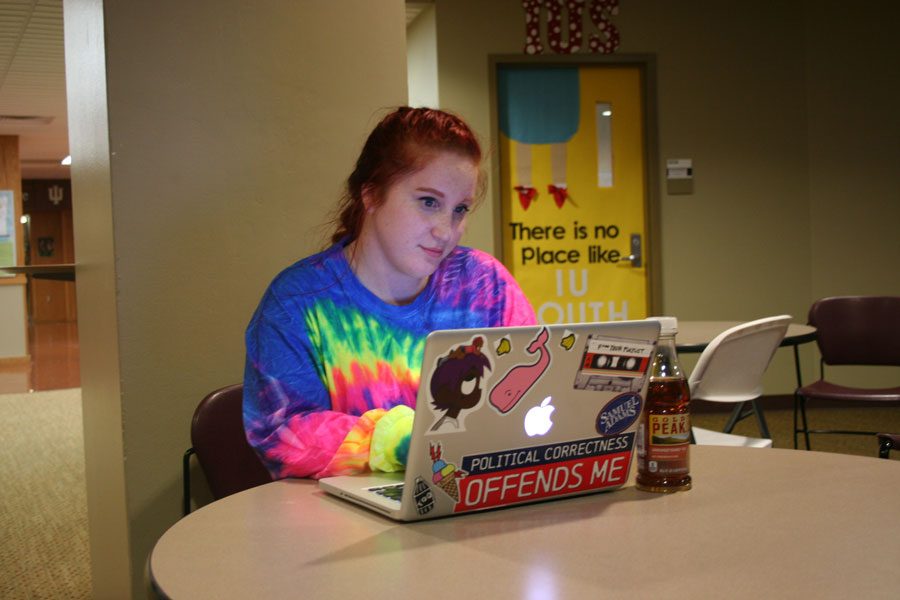 Caroline Elders, political science sophomore, started her interest in politics from her cousin. Her cousin always kept her informed on current issues and how the government worked. Elders said this fascinated her. It still does.

She hopes to go to law school and learn constitutional law. One of the reasons, she said, is because politics is forever changing.

“I want people to stay up-to-date on how our country is run and how it affects them.” Elders said.

Whether or not most millenials are as politically engaged and motivated as Elders is up for debate. For example, researchers at the University of Maryland found increases in millenials voting and trust in government, those in the generation are involved less in traditional grassroots political activity such as volunteering for a campaign.

The continued invasion of politics in our social media feeds since the 2016 election cycle begs the question of how recent events might influence how engaged millenials have become.

Hagan Hardmen, mechanical engineering freshman, said that millennials are involved in politics and current issues when those issues directly affect them. But he said that there is sometimes a lack of depth in fully understanding the issues.

“Most millennials are looking more towards the future, which tends to be mildly more liberal,” Hardmen said. “With Trump and everything happening, some of them got involved in a sense but I don’t think really in-depth involved like understanding what’s going on.”

Hardmen said he doesn’t really believe that Trump was the reason so many millennials got involved, but that it was something bigger and out of the norm that occurred.

“People in general start to get invested into it, including millennials,” he said.

Hardmen said that, sometimes, when millennials get involved with politics, it can be considered a good thing, but not always.

“There are some of them who start to really read into it and really get involved, and some who are just like, yeah screw that, and then they’re done.” Hardmen said.

Ann Maddox, graphic design junior, said that she thinks it is a good thing that millennials are getting more involved, but that the use of Facebook makes political debates worse.

“I feel like social media puts a negative impact on politics because everything is available to everyone, and I don’t think that’s how it should be,” Maddox said.

Though social media may polarize, Hardmen said is that he thinks his generation may be the next to cross party lines and meet in the middle.

“A lot of people are conservative with pretty modern things but pretty liberal with futuristic ideals.” Hardmen said

Tesla Barnett, elementary education junior, also said that millennials are going to be the ones who cross party lines and meet in the middle because of the strong stance of equality that the generation has.

“I think we will since our generation is more for equality. With things like gender equality, feminism and stuff like that.” Barnett said.

Barnett said that, although millennials are leaning more towards liberalism, that can have its positives and negatives with things like party balance.

“Just because there is supposed to be a balance and when there’s not, then the minority is not going to have a say in most stuff.” Barnett said.

Barnett also said that she does not believe millennials are involved enough in politics and the issues.

“I don’t think a lot of us have the knowledge to even talk about politics.” Barnett said.

Elders said she feels as if millennials and younger generations are trying to understand more about politics and current issues that they are facing right now. However, she said that she doesn’t think they are not using reliable sources, instead relying on siteslike Facebook and Buzzfeed.

“That there is no true source of journalism that is going around as of right now. It is all just hearsay,” Elders said “If millennials get more involved in their research, it will help them figure out what they want to do in politics.”

Abby Velkoski, psychology junior, said that Facebook is one of the things that contributes to millennials and politics, but that it has more of a negative than a positive with different social media sites where people voice their opinions for that certain amount of time.

“A lot of people want to post on Facebook but don’t really want to go out and actually vote.” Velkoski said.

While Elders is worried about where her generation gets its information, she also said it is most definitely a good thing millennials are getting involved.

“At the end of the day, we are the ones that are going to run the future,” Elders said. “So we should at least know how it’s going to be run.”
Elders also added that kids who are in elementary need to prepare and understand the future in politics.