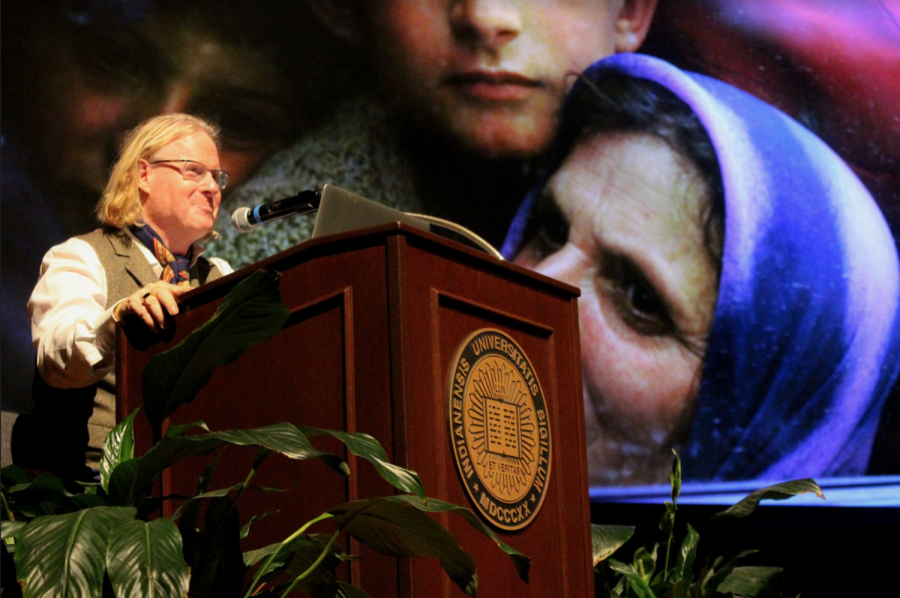 When Turnley talks about his work, he says photography is about sharing, and about how and what you see in the world around you.

The sound of applause fades as Peter Turnley walks on stage.

“Keep your eyes and heart open, there’s a gift waiting for you at every street corner,” said in his opening remarks.

He presents a timeline of photos – from cafes in Paris to the Somali Famine, to trips to Cuba, ending in a barber shop in the Streets of Harlem. Each photo telling a story using different themes and emotions found in humanity. By the end of the night, the audience had experienced life, love and tragedy.

He has travelled to 90 countries and witnessed most major international, geopolitical and historically significant stories and moments in the last thirty years. Turnley, originally from Fort Wayne, now has a home in New York and Paris. He has been featured on the cover of New Week 43 times and has been published worldwide. He came to IU Southeast as part of the Louisville Photo Biennial, many photographers were attracted to the presentation. Michael Palmer, a photographer for pleasure, was in the audience and took notes during the presentation.

“Peters ability to transform the pain and suffering that he saw and to turn it into beauty. It was hard. It wasn’t ugly but it was just hard to watch,” Palmer said. “Like picking up what starvation might feel like.”

Turnley shared one of his prominent memories; the story of Mohammad, a young man from Somalia while the country was struggling with a famine. The man died from starvation after Turnley had spent a day trying to find a hospital to accept him.

Even after seeing the devastation in Somalia, several war zones and other natural disasters, such as the war in Iraq and Hurricane Katrina, Turnley said he still finds joy in his work.

After returning home from many of his assignments, Turnley admitted he would sometimes kiss the walls of his home. He said his photos of the love he sees in Paris is therapeutic for him. Those placed those photos in a book called “French Kiss – A Love Letter to Paris.”

Turnley explained T.R.I. Star Barber Shop – which has since closed– and the significance the shop had on his life. Turnley found himself visiting the small Harlem shop many times a week over the course seven years. He found the owners and workers to be sincere and friendly, saying himself, “it was a home away from home.”

An ongoing theme throughout his presentation was the belief that humanity should “Look through the world with a questioning gaze.”

This idea was inspired by Henri Cartier-Bresson, one of Turnley’s largest influences. During a Q & A after his presentation, Turnley said that he is often asked how he can make photos of such horrible things instead of helping them. He explained that if he is able to get a powerful enough photo, then he hopes other people can help them where he can not.

“One of the foundations of my beliefs is the idea of the family of men and women,” Turnley said. “That no matter how different we are based on themes of geography, ethnicity, race, religion, culture, history, that the thing that people everywhere have in common are greater than things that make us different.”