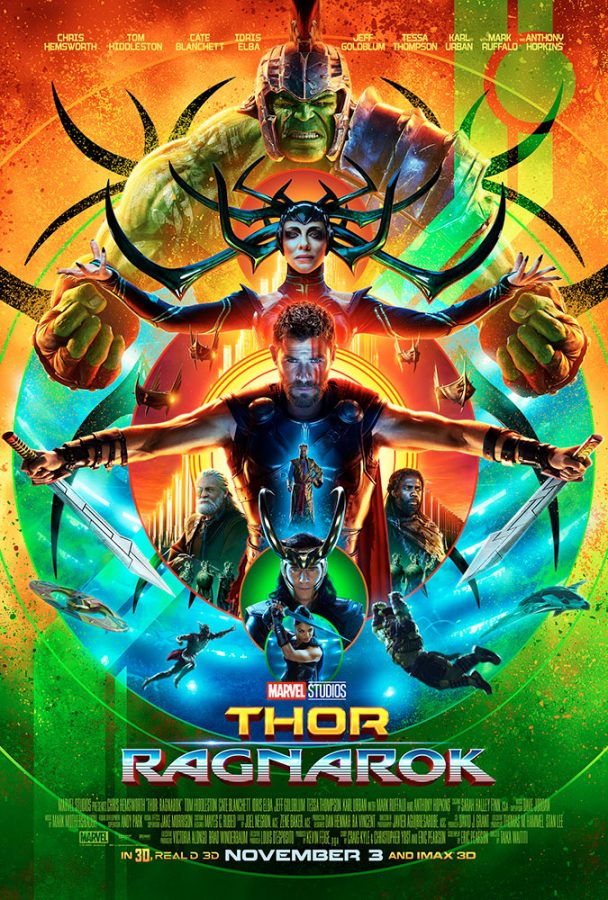 Aside from a few pacing problems, and lack of seriousness, “Thor: Ragnarok” is an action packed comedic thrill ride, which should prove to be another box office success for the Marvel Cinematic Universe.

The film centers on Surtur, who seeks to fulfill an ancient prophecy and bring about Ragnarok, the destruction of Asgard, the mythical city of the Norse gods. Meanwhile, Hela, the Asgardian Goddess of Death, attempts to seize control of the throne of Asgard and conquer the Nine Realms. Only the Mighty Thor and his band of Revengers stand in their way.

Directed by Taika Waititi, “Thor: Ragnarok” stars Chris Hemsworth as the God of Thunder and Tom Hiddleston as the ever-mischievous Loki.

“Thor: Ragnarok” is the third entry in the Thor series and is coming fresh off the heels of Marvel’s “Guardians of the Galaxy Vol. 2” and “Spider-Man: Homecoming.” And much like Marvel’s last few films, “Thor: Ragnarok” is packed with as much humor as there is action.

From the opening sequence to the very last post credit scene, the comedy never lets up. And therein lies one of “Ragnarok’s” few stumbles: Waititi doesn’t take the time to dwell on some of the film’s more important moments. Instead, many of the film’s one-liners come right on the heels of a significant loss.

But that is not an altogether bad thing. On the contrary, much like this year’s earlier Marvel successes, “Thor: Ragnarok” uses humor to drive the plot and provide a thoroughly fun and enjoyable film. Marvel has developed a formula in recent years, and “Thor: Ragnarok” is the culmination of that vision.

But “Ragnarok” is far from simply formulaic, the direction by New Zealand director Waititi is fast-paced, and there’s a real sense that the cast had a fun time making this film.

“Thor: Ragnarok” a fun film, and is among of the best films in the MCU. The film has just about everything a blockbuster film can offer: thrilling action, a powerful score and great acting.

The chemistry between Hemsworth and Hiddleston is one of the best things about the film. Their constant back-and-forth, sibling rivalry, is the highlight of the film, and it humanizes characters who border on godlike.

In perhaps the best portrayal of a Thor villain since Loki, Cate Blanchett’s Hela is a force to be reckoned with. Marvel has a penchant for weak villains, and while Blanchett’s character is there to mainly push the plot forward, Hela is just as strong and imposing as any of the other characters. Stronger even than the Mighty Thor, Hela proves more than a match for the God of Thunder.

Not to be outdone, Mark Ruffalo’s Hulk is an excellent counterpart to the often pompous Thor. Let’s hope their developing bromance will be carried on in future “Avengers” films.

In another great acting performance, Jeff Goldblum plays the Grandmaster, a Marvel master manipulator and overseer of the gladiatorial contest in which he pits his champion, the Incredible Hulk, against Thor. Goldblum’s Grandmaster is a charming, if somewhat morally bankrupt character.

Tessa Thompson rounds out Thor’s ragtag Revengers team as Valkyrie, one of the legendary Asgardian warriors who now works as a mercenary for the Grandmaster. Valkyrie is a broken-down drunk who initially wants nothing to do with Thor or his mission to save Asgard. She comes around, however, and shows exactly why the Valkyrie were so feared.

The MCU has learned a thing or two over the past few years, and with “Black Panther” and “Avengers: Infinity War” coming in early 2018, it looks like they won’t be letting up anytime soon.