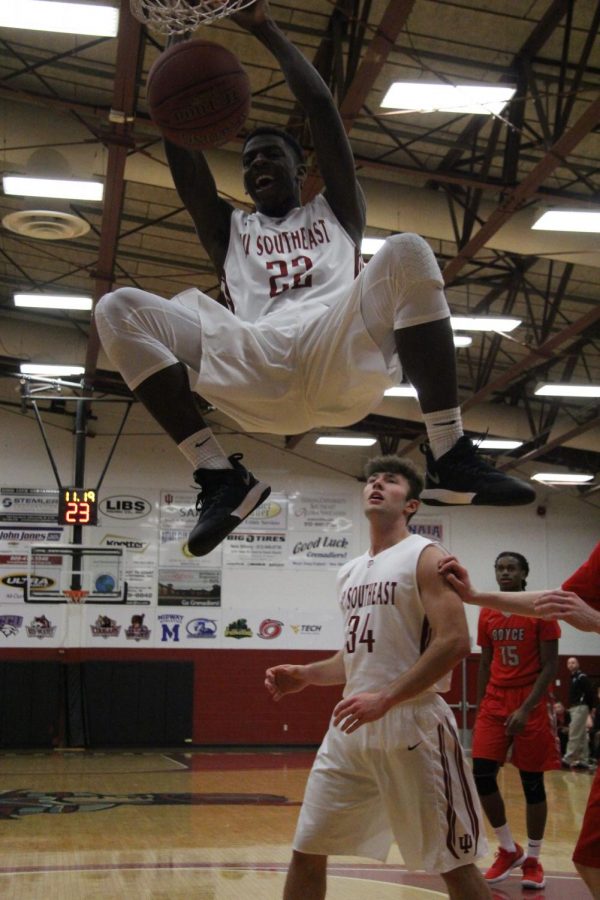 Throughout the game, the Grenadiers pushed past the Bulldogs’ defense, enabling Deshawn Lewis, business management sophomore, to achieve a dunk.

It was all wins on Saturday for the men’s and women’s basketball teams at the IU Southeast Homecoming.

Before Saturday’s games, students and alumni gathered in the parking lot outside the gymnasium for a tailgate. The  tailgate included food and drinks, corn hole, a bubble truck, booths for sororities and fraternities and a beer garden.

“[The tailgate] was a way to come together to support our teams,” Donta Hickson, sociology senior, said. “The beer tent, the side games and [everything] was all cheap. You can have a lot of fun.”

The Grenadiers came away with convincing wins in both the men’s and women’s game.

“I was really pleased with the teamwork and [I am]looking forward to the nest game,” said women’s head coach Robin Farris. “I think this team is better than last year’s team and we have a real opportunity to get better.”

The men’s team won in a blowout; 91-48 against Boyce College. Every player on the roster scored a bucket in the contest.

Leading the way for the Grenadiers was Joe Jackson, senior forward, with 17 points. The Grenadiers forced 29 turnovers and scored 39 points off of those turnovers. IU Southeast recorded 16 steals in the game and six blocks. The Grenadiers move to 4-1 for the year.

“I transfered from Ball State and didn’t get to go to their Homecoming, so I’m glad I got to experience a smaller one,” said Ryley Nicole, a public relations sophomore.

During halftime of the men’s game, Chancellor Ray Wallace announced the homecoming queen and the winner of the third annual Grenadier Cup. The Grenadier cup is a contest between all of the recognized groups on campus to show their school spirit in a friendly competition.

“[Homecoming] is an opportunity for the entire campus to be involved with everybody,” said Tyler Stauth, a strategic communications junior. “All the little games and interacting with people we don’t usually get to.”

The women’s team will be back in action at Kentucky Christian on Tusday, Nov. 14, and the men will will play at Bellarmine on Wednesday, Nov. 15.