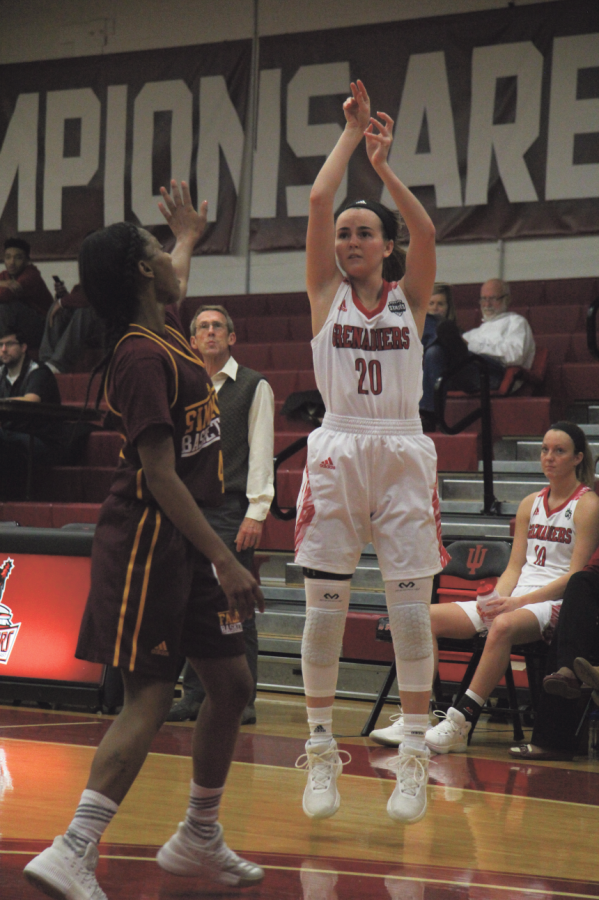 The women’s basketball team dished out a 104-point beat down to break the school record for margin of victory.

The Grenadiers dropped their first two games of the season, one being on the road to Division I Southeast Missouri State University, before handling Simmons College of Kentucky 121-17 for their first win.

The team returns nine players from last year’s team that finished 16-15 and 11-7 in the River States Conference (RSC). The Preseason RSC Women’s Basketball Coaches’ Poll predicted IU Southeast to finish seventh out of the 13 team conference. In the West division they were picked to finish third.

Head coach, Robin Farris has a set of team goals for the upcoming season.

With the departure of leading scorer Jocelyn Mousty, who graduated, senior guard Annie Thomas and her fellow upperclassman will be heavily looked at to lead the way. Thomas has taken accepted the leadership role for
the team.

Last season Thomas averaged 10.3 points per game, while dishing out 3.9 assists. Thomas finished in the top 30 in the country in assists and steals.

Sophomore guard, Madi Woods, started 27 of the 31 games last season and averaged 9.1 points while shooting 43 percent from three. Woods and Thomas will handle the back court work for the Grenadiers this season. The guard play will be essential for the Grenadiers.

“We need a number of people to step up but mostly our junior and seniors,” Farris said. “We need to have more consistency overall and good guard play this year to
be successful.”

The Grenadiers will add two transfers to the squad this year.

Camm and Josie Hockman, senior forward, will also be looked at to step up there play this year. Through the first two game Hockman averaged 9.5 points per game and grabbed 4.5 rebounds. Camm is averaging 5.0 points and
6.0 rebounds.

“[Ashley] Johnson, [Baylee] Kruger and [Josie] Hackman are having great seasons so far. They have stepped up into their role as upperclassmen and showed a lot of leadership for us,” Thomas said.

Ashley Johnson, senior guard, has put in great numbers so far this season for the Grenadiers. She has averaged 12.5 points per game on 42 percent from within
the field.

“Our transfers hopefully will make an impact as they have more experience than incoming freshman,”
Farris said.

The Grenadiers have played six players over 20 minutes. Their depth will be a huge part of their success
this season.

“I love how much depth we have. We are deep this season and have some great players coming off the bench for us,” Thomas said. “Our starting five is important, but our depth on the bench is going to be so effective for us.”

While the sole focus will be on the conference play and taking it game by game, the Grenadiers have their sights set higher.

“We have goals set for each game as a team, and each opponent. Those goals for each game are going to be steps to reaching our ultimate goal which is winning conference,” Thomas said. “I think we have potential, depth and talent to make the national tourney this year.”

The Grenadiers next home game is against Lincoln Christian University on Friday, Nov. 17..