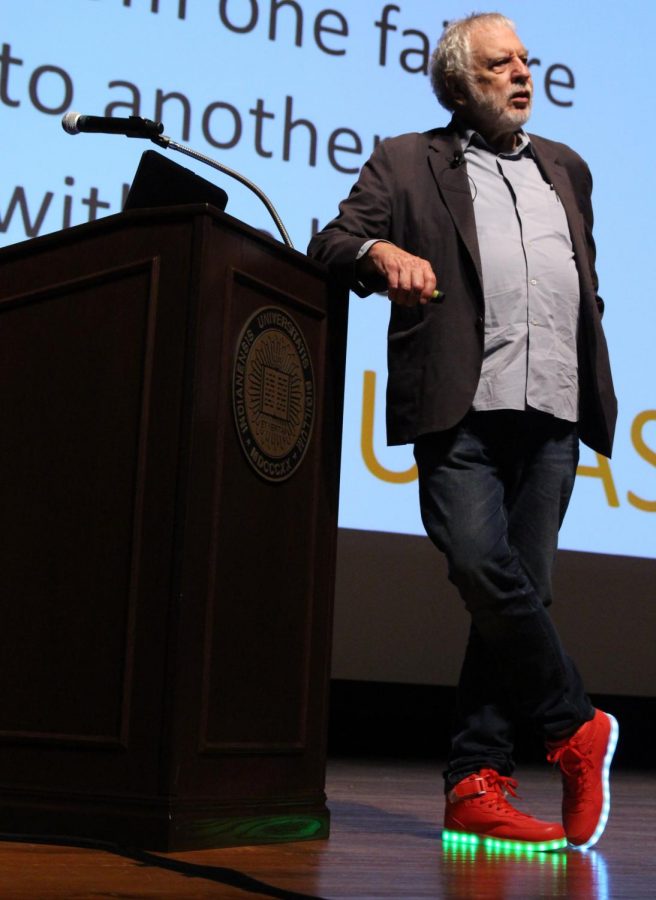 “Habits destroy brain cells, new experiences create them,” began Nolan Bushnell as he encouraged a sold out auditorium. Bushnell, known widely as the “father of video games” spoke at the Ogle Center about his time at Atari and his thoughts on what the future of technology holds.

“The start [of Atari] actually happened with two accidents in my life,” began Bushnell as he stepped out on stage. “I was putting myself through school working at an amusement park and I became manager of the games department.”  At the same time, one of his professors at the University of Utah had a unique interest in connecting displays to computers. Bushnell continued the story:

“I played the game Space War and said, ‘Hey if I could put a coin slot on this screen and put it in my arcade it would make a lot of money’”. Unfortunately, the money to make one computer was more than it could ever make back in an arcade. Bushnell said, “this was not the right time.”

A few years later, when the price of manufacturing computers had decreased exponentially, Bushnell decided to give it a shot.  After finding backers, he created his first arcade game called Computer Space. Although highly unsuccessful because of the steep learning curve, it paved the way for his biggest success, Pong.

After discussing his first major success, Bushnell elaborated on his time at Atari, especially his unique position as the boss of Steve Jobs.  Bushnell began with a complaint, “Steve Jobs had this particular problem that he didn’t like to bathe, he thought that because he was eating only fruit that it didn’t matter, but it did.” Besides his initial negative remark, Bushnell was impressed with Job’s work. One of his regrets through the years was not giving Jobs 50,000 dollars to start apple.

Bushnell concluded his presentation by addressing the future of technology. He spoke about how technology needs to advance and certain jobs need to dissolve to create better ones. He used the example of phone operators, if people were still being hired for the position, then we would need more people than are available to do the job. He then used the example of self-driving cars and how it will impact many existing companies. Taxis, body repair shops and even truckers could be put out of jobs. However, new opportunities will arise from the demand for new, underground roadways.

During the Q&A portion of the evening, many questions were asked about the entrepreneurial and business side of the equation for success. Will Bruns, one of the members of the audience explained, “I really aspire to be an entrepreneur and I can take his ideas and use them in future businesses.”

Bushnell commented on how people fail to reach their potential, “We all push ourselves to doing things that are easy, when we should be doing things that are really hard.” He encouraged everyone in the audience to play the “dice game” where a list of new experiences is numbered and two dice are rolled. He explained, “January one of every year, I throw dice to do something I’ve never done before.” Whatever number the dice added up too is the number of the new experience on the list that he tries to accomplish that year. This has lead to him painting his own collection of artwork and the writing of his first book, Finding the Next Steve Jobs. 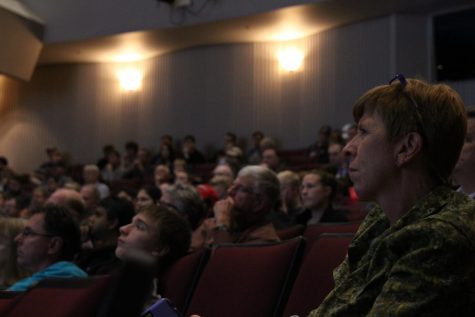 Karen York, a high school teacher, came to learn more about how to be “on the cutting edge of the brain, and how the brain learns.” She said she wanted to learn new ways to help her students succeed. “One of the things that he said that I really appreciated was the [getting rid of] grades, I hate giving grades because it stifles the learning.” She said one memorable part of the presentation for her was Bushnell’s statement, “Teachers and professors should not be there to give out the information, they should be the facilitators.” Photo by Joshua Roy.