The effects parental divorce has on college students while in college. 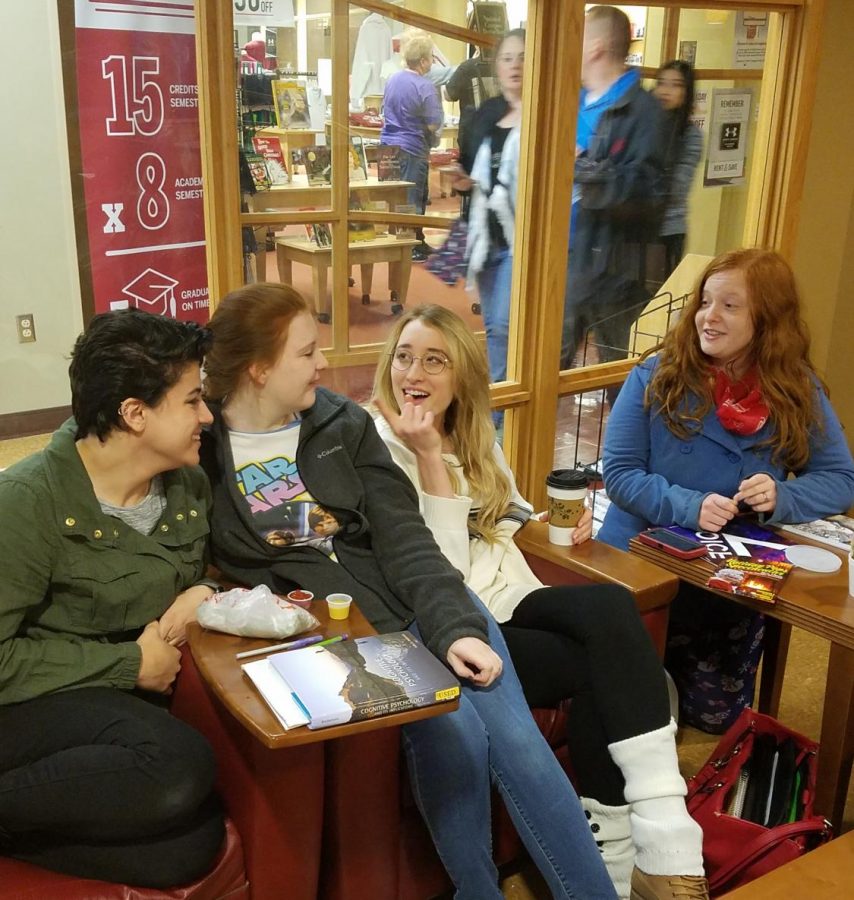 Megan Randall [far right] said, "Don't suppress yourself. Reach out. Call a friend, your significant other, even the counselors on campus." Photo by Beth Hunter.

Nearly half of all marriages end in divorce, surprisingly within the first seven years of marriage. Those who decided to separate later in the marriage, such as married parents that have older, college-aged children, are less frequent, but still make up a large amount of the divorces in the U.S. according to Hazel Zemel, a certified social worker with over 30 years of therapeutic and supervisory experience in families, couples, children and divorce and mediation therapy.

College is a stressful time for young adults. This stress can have a wide range of effects, such as poor eating and sleeping habits. Unfortunately, some students may experience a tragic event during their time in college which could add to their stress.

Children, family dynamics and family relationships all take a toll from something like divorce. No matter the reason the divorce occurs, an event like this affects students emotionally and mentally.

With life experiences, trials and tribulations or anything people might face within their time on earth, people of different mental capacities and capabilities can grasp and process something of this measure faster and easier than others.

One of the biggest challenges students may face when dealing with their parents’ divorce is dealing with their new lifestyle. “Divorce changes the whole family dynamic, and the children have to figure out how to adjust to the new family dynamic”, says Shelly Nally, a licensed clinical social worker who has thirty years of experience in family counseling, oncology and case management social work.

Most young children won’t worry about the financial setbacks that their family may experience due to the divorce. College students, on the other hand, may worry about it. “It hit me emotionally because I was worried of my financial future and this caused major stress that affected my health,” recalls an IU Southeast student who chooses to remain anonymous.
Different people will have different reactions to divorce. Some may feel betrayed by their parents and other may feel relieved, depending on the family dynamic prior to the divorce. Lucas Young, a former student of IU Southeast, recalled that his younger brother was tired of the fighting and was happy that it would finally be over.

Emotional effects that students may face after a parental divorce include, but are not limited to, guilt, anger and resentment, and the feeling of being stuck in the middle. Naturally, humans are going to need a way to let out their emotions that come with stressful situations. The key is to express those emotions in the right manner.

Guilt- the emotion that consumes a person the most. A student who blames themselves for the inevitable event of a divorce is quite normal, but should be avoided. Ashley McIntosh, a psychology graduate from the University of Phoenix, shares her idea in an interview of what might be or should be expressed to students who are working through an event such as this.

Many parents believe that once the children are in college, they will be old enough to not need the parental union that they needed when they were younger. Nally stated in an interview that “young kids view grief and loss differently” than college-aged kids do.

Divorce can have similar effects on college students as it does on young kids. College kids can still feel like the divorce is a betrayal and they will still go through the five stages of grief, like a young child would.

Considering the 5 stages of grief, anger is a feeling or emotion that is necessary for an ultimate sense of understanding or acceptance. Each person has to work through each stage on their own, but some consistently live in one stage of grief. Some students do not take the news well and are never the same.

Anger and resentment seems to be a later response after the shock of the unexpected when college students first find out about their parents’ divorce. Any student might ask why the situation occurred or wonder the reasons the parents wanted the outcome of breaking up a family.

“My oldest brother sort of saw it coming, as well [as I,] but my little brother had the worst reaction,” said Megan Ransdell, a sophomore at IUS studying psychology.

“He cried, he screamed; he couldn’t understand why my parents couldn’t work it out. I think it made him become more closed off when it comes to feelings,” said Ransdell.

Divorce changes the whole family dynamic and the children have to figure out how to adjust to the new family situation. Everyone will adjust on their own time, and that timeline is different for each individual.

Many students have a clear idea of what “home” is, and when their parents get divorced, they may lose that idea. This is especially detrimental to students that don’t live at home during college. They expect to come home to their once stable lifestyle, but are only faced with two separate buildings that mean nothing to them.

College students, especially those with younger siblings, are seen as the more responsible children in the family. Because of this, the student can sometimes have feelings of being torn between the two parents. “You might find yourself torn in two different directions, and that’s okay. If you have a good relationship with both your parents, find a healthy balance. Tell the other parent you understand,” said Ransdell.

Students are affected by divorce in many ways. Sometimes a student’s grades drop or their social life may be affected. In Young’s case, his grades dropped a little, but he was able to improve the following semester after he had time to cope. Ransdell chose to go to therapy sessions to help cope with the emotional toll the divorce took on her.

Surround yourself with people or isolate yourself?

As a friend of a student whose parents are getting a divorce, sometimes just being there for them and recognizing that their feelings are valid is enough. The amount of support that people need when going through something like this will be different for everyone.

Robert Phillips, a licensed mental health counselor who has worked with high risk families, suggests, “Express to each parent what they [the student] need from each of them after taking some time to consider what those needs are.”

Another major difference between young kids and college students when their parents divorce is how they cope with the situation. Phillips suggests to “avoid using alcohol to cope.”

Young said, “Hang in there; it’ll get better. Make sure you spend time with both of them. Don’t particularly like one of them over the other.”

Each student may take the life-changing event differently. Within an interview, Young said that he chose to deal with the effects of his parents’ divorce on his own. He would talk to his girlfriend at times, but mostly kept to himself during the divorce.

A criminal justice major at IU Southeast who chooses to remain anonymous said, “It will be okay. Your life may seem like it’s been turned upside down; but you will come back on top, and you will survive this.”

It’s important for students going through this tragic event to be able to find someone that they’re comfortable talking to. Ransdell suggests, “Don’t suppress yourself. Reach out. Call a friend, your significant other, even the counselors on campus. You are not alone in this world, and you don’t have to feel like your feelings are not important. You’re important, you matter, and you will get through this; one day at a time.”

For students who may not be comfortable talking to a university faculty member, there are outside resources they can use. Nally suggests looking into support groups to be with people going through similar situations. Nally also said there are other organizations that will help people cope with difficult situations such as, Life Spring in Jeffersonville and Centerstone in Louisville.