The Desensitizing of Terrorism

Terrorist organizations primarily use psychological warfare against western countries, but the effect may be wearing off. 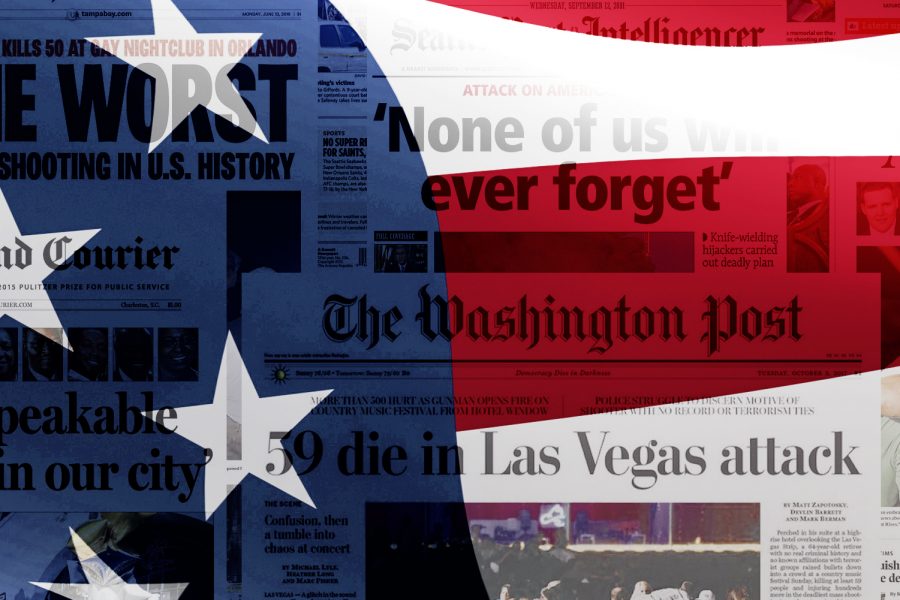 All of these locations have one thing in common; they’ve had at least one major terrorist attack occur since 9/11. According to the Global Terrorism Index, in 2016, the U.S. suffered more deaths from extremist terrorism in any year since 2001 and the highest rate of lone-actor attacks among developed nations. The 53 separate incidents led to 64 deaths and 130 injured victims.

“Interestingly enough, one of the primary goals of engaging in terrorism is to create an irrational fear in the audience to the terrorist action,” Cliff Staten, professor of Political Science and International Studies at IU Southeast, said. “Because an irrational fear leads people to take irrational actions.”

Terrorist organization and independent terrorists engage more in psychological warfare than physical warfare. They believe they have a better chance of victory by breaking down civilians than engaging in battlefield combat.

“Fear is the primary psychological weapon underlying acts of terrorism,” Daniel Antonius, director of forensic psychiatry at the Jacobs School of Medicine and Biomedical Sciences in Buffalo, said on CNN. “It is this fear, or the anticipation of future acts of terror, that can have serious effects on our behavior and minds.”

According to Psychology Today, the fear of terrorism is both rational and irrational; rational in that there is an ever-present threat of a terrorist attack being repeated, but irrational in the probability assigned to that potential event.

Staten offered a comparison to break down the irrational fear people have of terrorist attacks.

“We all fear having an automobile accident and being killed, but most of us have a rational fear — it doesn’t stop us from driving,” Staten said. “An irrational fear would lead us to decide to no longer drive and it’s irrational because the odds of you dying in an automobile accident are very, very minimal. The costs of not driving outweigh the benefits of not driving.”

There is no doubt, the 9/11 attacks weigh heavy on the minds of Americans when talking about terrorism. The actions which took place on that day changed the way Americans viewed the world.

With most college students being able to vaguely remember the day, or it being the first terrorist attacks they learned about, it’s easy to compare recent attacks to that fateful Tuesday morning.

“I think [9/11] affected our view of other attacks because we are always comparing [new attacks] to 9/11.” Shelby Kirchgessner, nursing senior, said. “Although we were young, I still always find myself comparing back to 9/11. It has also affected our views, because when you hear of an attack, you automatically assume we are going to war like we did for 9/11.”

Too Much of a Bad Thing

The U.S. is fortunate to not have terrorist attacks carried out as frequently as they are in Europe. Unfortunately, some Americans become desensitized to attacks in Europe due to the rate of occurrence and not being close to home.

“I don’t think my reactions have changed to attacks on U.S. soil since 9/11 because they are still not as frequent as attacks in Europe,” Mason Hublar, marketing and sales senior, said. “It’s always a tragedy when a terrorist attack happens, but I would say I am becoming desensitized to attacks in Europe.”

Along with the ever-increasing amount of attacks, comes the constant bombardment of information from social media and news organizations following the attacks.

Some can have differing opinions on the attacks depending on the media organizations they choose to obtain their information from and the spin they put on it.

“For most people, it depends on which medium they decide to consume,” Aaron Cleek, communications senior, said. “People that turn on Fox News, for example, will more than likely have a much different outlook on terrorism than someone who usually watches CNN.”

The 9/11 attacks certainly changed many procedures with air travel and other high profile events to ensure another massive attack is not carried out.

However, with more and more security measures put in place, most Americans still believe a major attack can take place.

According to a survey conducted by the Pew Research Center — a nonpartisan fact tank that informs the public about the issues, attitudes and trends shaping the world — after the 15th anniversary of 9/11, “Currently, 40 percent of the public says that the ability to launch another major attack on the United States is greater than it was at the time of the 9/11 attacks, which is the highest share expressing this view over the last 14 years. About a third (31 percent) say terrorists’ abilities to attack are the same as at the time of 9/11, while just 25 percent say their ability to initiate a major attack is less than at that time.”

Some students fall into the minority group in the survey, believing carrying out a major attack is less likely than it was during the time of the 9/11 attacks.

“I’m sure it most likely depends upon where and how the attack is supposed to happen,” Cleek said. “My first instinct is to guess a major attack such as 9/11 is less likely when considering the amount of precautions and resources that we invest in today.”

The desensitizing effect on Americans is growing as the number of attacks continue to rise, but some might argue growing effect can be a good thing.

“One could argue that becoming less sensitive to these terrorist events will make it more difficult for groups like ISIS or Al Qaeda to achieve their goals,” Staten said. “If we are no longer frightened or less sensitive to these events then we will no longer put so much pressure on decision makers to react in such an irrational manner. Cooler heads will prevail in the decision making process.”

No one should ever downplay the serious nature that comes with a terrorist attack, however showing the nation is less sensitive to the attacks can be a demoralizing blow to terrorist organizations.

“I think desensitizing can be a good thing because it shows Americans are feeling more safe in their surroundings,” Hublar said. “You never want to downplay an attack, but I think Americans aren’t afraid of the mind games like they used to be. [Terrorists] will always make people fear them, but not near as many as there used to be.”