States that have legalized recreational marijuana have been put on edge with recent federal enforcement of laws against marijuana use. 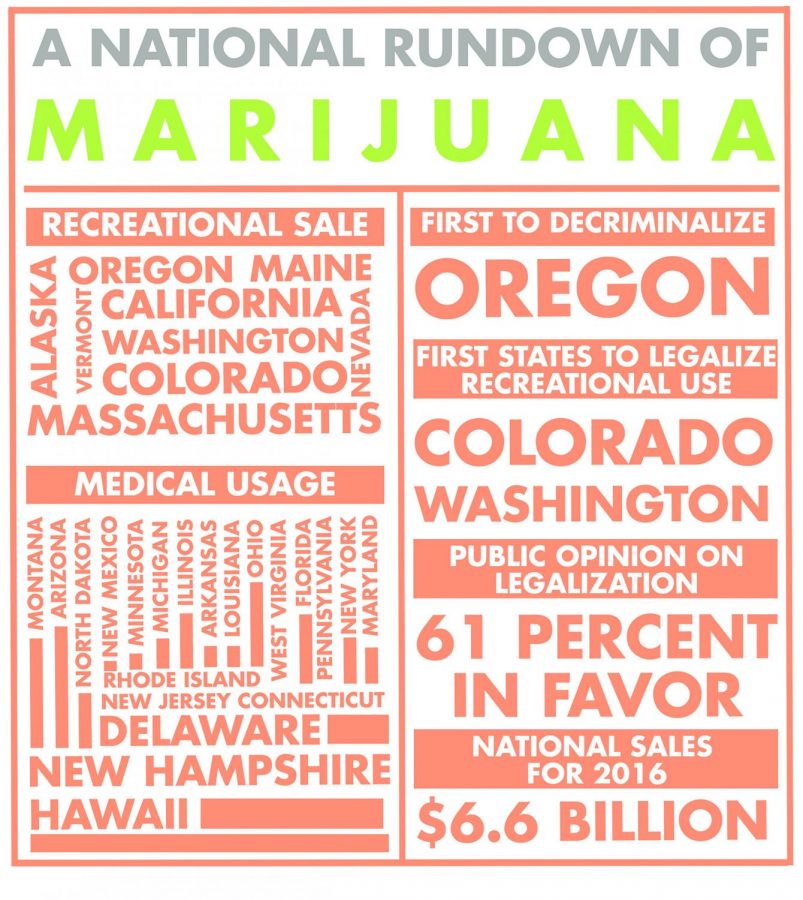 Certain states have been pushing for the total legalization of marijuana, but the Trump administration has other plans.

With both recent and in-process legalizations of recreational marijuana in seven states and Washington D.C., the Department of Justice has been left with the tricky task of enforcing the federal laws prohibiting marijuana use in any form.

On Jan. 22, Vermont became the seventh state to legalize recreational marijuana, but in a completely different way than any state before them. Rather than obtain legalization through a citizen initiative, the law was passed directly through its legislature.

In a statement released by the Vermont government, Governor Phil Scott said, “I personally believe that what adults do behind closed doors and on private property is their choice, so as long as it does not negatively impact the health and safety of others, especially children.”

He added, however, that he will veto any attempts to legalize commercial sales of marijuana until proper regulations are put in place to address education, prevention and motor safety concerns.

In all reality, though, state laws legalizing the use, sale or distribution of weed aren’t actually legal.

It is still a federal offense to possess, buy or sell marijuana. The drug is classified as a schedule I substance via the Controlled Substances Act, meaning it is regarded as having a strong potential for abuse and no currently accepted medical use.

So, how exactly does the government plan to address the national push toward marijuana freedom?

In his campaign speech, President Trump had seemed to display an open mind to the increasing popularity of marijuana legalization.

“I think that should be a state issue, state by state,” Trump said in an interview to the Washington Post.

Regarding medical marijuana, he told Bill O’Reilly in a separate interview that he was “in favor of it 100 percent”.

However, on Jan. 4, Attorney General Jeff Sessions repealed a movement enacted by the Obama administration that provided guidance on handling the disconnect between federal and state
laws on marijuana. This
guidance had involved
minimizing prosecution and
federal interference.

Sessions has long opposed the legalization of marijuana. He defends his decision with concern for upholding
federal laws.

“It is the mission of the Department of Justice to enforce the laws of the United States, and the previous issuance of guidance undermines the rule of law,” Sessions said in a statement.

Before the Obama administration put this plan into place, those in the pot business operating in states that allowed sales of the drug were subject to constant federal raids and arrests. Whether or not this will become the reality again in the upcoming months is uncertain.

“I think some kind of meeting of the minds is going to happen, you can’t have state law and federal law in conflict like that,” Joe Wert, professor of political science at IU Southeast, said.

“Eventually, if the Trump administration insists on enforcing federal law, it’s going to end up in the courts,” Wert said. “The Supreme Court is probably going to end up saying those state laws are unconstitutional and they’ll strike them down.”

This move also raises the question of what priority pot enforcement is going to take in the eyes of the government and what resources will be sacrificed to keep pot at bay.

“What are you going to cut back on: heroin enforcement or sex trafficking, to shut down a little marijuana shop?” Gov. John W. Hickenlooper, a Democrat from Colorado, asked in an interview.

This impending crackdown has threatened the expanding marijuana industry and caused unreliability for business owners. Marijuana has proven itself as a viable source
of revenue.

In 2017 alone, Colorado’s sales from medical and retail marijuana surpassed $1.3 billion from January to November, according to the Colorado Department
of Revenue.

The numbers continue to rise each year. In 2013, when Colorado first legalized recreational use, sales were around 700 million dollars. In just four years, the amount of sales has doubled.

The Colorado Department of Revenue also has a count of every marijuana store, both medicinal and recreational. Combined, there are around 1,000 stores in Colorado alone, while, according to ABC Denver, there are only 200 Starbucks in the entire state.

In California, which legalized cannabis on Jan. 1, the cannabis research firm BDS Analytics predicts that sales will surpass $3.5 billion in 2018. This has major implications for an increase in tax revenue.

How this recent change will impact the future of the marijuana industry remains to be seen.

Both Sides of the Argument

States continue to be split on the idea of legalizing marijuana. As research on the subject expands, both sides have more facts to back up their arguments.

A 30-year New Zealand study found that teens who used marijuana for extended periods of time had up to an 8-point IQ-drop by the time they matured into adults.

The National Institute of Health has found that 30 percent of users are at least somewhat dependent on the drug, with 10 percent forming a full addiction to marijuana.

On the other side of the spectrum, opposing research shows the reasons behind legalization of the drug.

A 2009 study by Health Canada contrasted the annual health-related costs associated with alcohol versus marijuana. They determined that alcohol-related costs are more than eight times greater than with marijuana per individual.

After legalizing pot, Colorado’s adolescent pot use has actually decreased, according to data from the National Survey on Drug Use and Health.

Dr. Sanjay Gupta, a medical correspondent for CNN and a proponent for keeping marijuana illegal, recently changed his ideas on
the subject.

“In my quick running of the numbers, I calculated about 6 percent of the current U.S. marijuana studies investigate the benefits of medical marijuana,” said Gupta in an article discussing his previous position. “The rest are designed to investigate harm. That imbalance paints a highly distorted picture.”

The reactions of IU Southeast students to the eminent crackdown varied.

“It’s so troublesome, having this fight over something so minor,” said Madison Baxter, a secondary education sophomore. “Especially for people who need it for
medical [purposes].”

“In a perfect world, the legislation would pave the way for a nationwide legalization plan,” said Matt McClellan, a communications junior.

Some students were unaware of the process behind upholding these laws.

“I didn’t know Trump had anything to do with the marijuana laws,” said Abigail Bryson, a creative writing freshman. “I thought that was a state-level decision.”

As of 2018, only 20 states have not legalized marijuana in some form, according to reports by Governing. These states include Indiana and Kentucky.

With the federal government cracking down, it doesn’t seem likely that Indiana or Kentucky government officials will react favorably toward the idea of legalizing marijuana in the near future.