The messy mentality of a school shooter

How can we, as a nation, better prevent and persevere through school shootings? 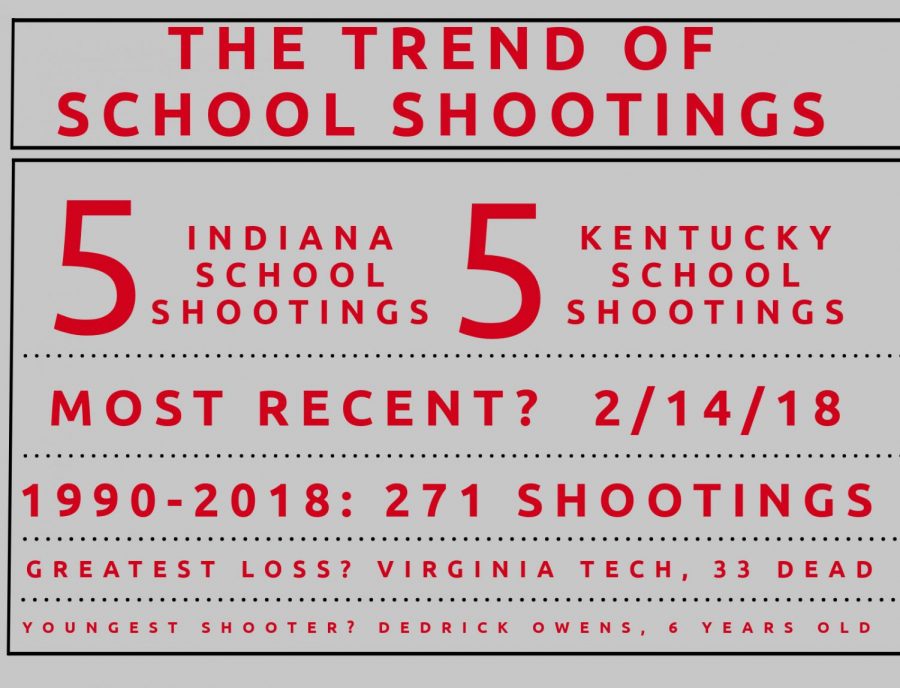 In schools across America, preventative measures are increasing as gun violence continues to make an alarming impact.

There were nine school shootings in 2017 and fifteen in 2016. Already in 2018 there have been eight. The most recent was Feb. 14 at a high school in Parkland, Florida. The suspect is a 19-year-old former student that was expelled for unspecified disciplinary reasons, leaving at least 17 people dead.

In Kentucky alone, two have been killed and fifteen injured during a school shooting in Marshall County that took place on Jan. 23.

Comparatively, the number of school shootings that took place across all of Europe last year was one. There was also one in South America, with none occuring in Asia, Africa or Australia.

The first modern incident of what would later grow into a national phenomenon occurred in 1998 in Arkansas, when 11-year-old Andrew Golden and 13-year-old Mitchell Johnson opened fire on Westside Middle School, killing five and injuring ten.

According to Arkansas law at the time, the boys could not be charged as adults, so both received prison time until they turned 21. They are currently the only two perpetrators of fatal school shootings to have been released from prison.

The very next year would bring about an entirely new meaning to what a potential school shooting could look like. This was the year of the infamous Columbine High School shooting, where 18-year-old Eric Harris and 17-year-old Dylan Klebold murdered thirteen and injured twenty-one before turning the guns on themselves.

This event would spark an onslaught of massacres across the nation during the next couple of decades.

Lucinda Woodward, associate professor of psychology at IU Southeast, said there’s not as much of a correlation between mental illnesses and the likelihood of committing future acts of violence as people typically assume.

“The fact is that most people who are mentally ill are not violent or of potential harm to others. So, cases of mass homicide are indeed the rarity in the mental health community,” Woodward said.

According to a 2015 article by Michael Stone, a psychiatrist at Columbia University, a collective database of mass shooters revealed that only 22 percent of perpetrators suffered from a mental illness.

What We Can Do

There are signs for recognizing whether someone is planning to commit a violent crime. Recognizing these signs and dealing with them effectively could prevent another statistic from unfolding.

“You usually hear someone say ‘We had no idea,’” Ray Klein, director of human resources at IU Southeast, said. “The literature and the research actually says we did have an idea and we just didn’t know how to recognize it.”

He went on to list some of the signs, including:

Someone who constantly gets in fights
Minor threats, such as saying ‘They’ll be sorry one day’
Don’t associate a lot with others
Unsympathetic or uncompassionate toward others
Show signs of believing that people are out to get them

“No one thing is a deciding factor, but a combination could be. Whatever bad behavior I have a practice of doing, it will probably escalate instead of reduce,” Klein said.

However, it’s important to remember and recognize that potential shooters may not possess any of these signs. The combination of multiple signs persisting over time is what can show potential for a violent crime. Remaining alert and having a plan in mind in case something happens is important.

“We try to do at least one active shooter event a year, where we train,” said Lieutenant Travis Huntley, a police officer on IU Southeast’s campus. “Typically, if you look at statistics of active shooters, it’s several minutes. It’s not several hours. We have what we call ‘go bags’ in all of our vehicles, that have extra ammunition, tourniquets … extra body armor. Our initial thing is gonna be how quickly can we respond to eliminate that threat.”

Huntley also said that he hopes to implement more scenario trainings. He urges students to run through possible situations and mentally train themselves to react in a decisive manner, so they can have better odds of escaping if something were to happen.

“We are committed to the university and the safety of the campus, and the kids and adults who go here, so it is definitely a priority of ours to make sure that we can respond and take care of the situation,” Huntley said.

He added ways to discover and stop potential outbursts in their tracks, including:

Assume threats are serious until proven otherwise
Report concerning actions or words
Eliminate easy access to guns
Do not lie to protect someone
Follow through with due process, no matter what
Maintain open communication and a supportive relationship with those close to you

It’s important to remember that, if you or someone you know experience violent thoughts on a consistent basis, there are avenues and ways to cope with them that are available.

“On the student level, we have the personal counseling programs. There’s just a tremendous number of anti-bullying or anti-discrimination initiatives on campus,” Klein said.

“We also have the Office of Equity and Diversity. If an individual believes that they have been treated in a negative manner, based on their race, gender, nation of origin or sexual preference, many organizations make some really good efforts to demonstrate … that inclusion and respect for everyone are huge values and that treating people in a different manner will not be tolerated.”