Nolan Rogers — Champion Among Us 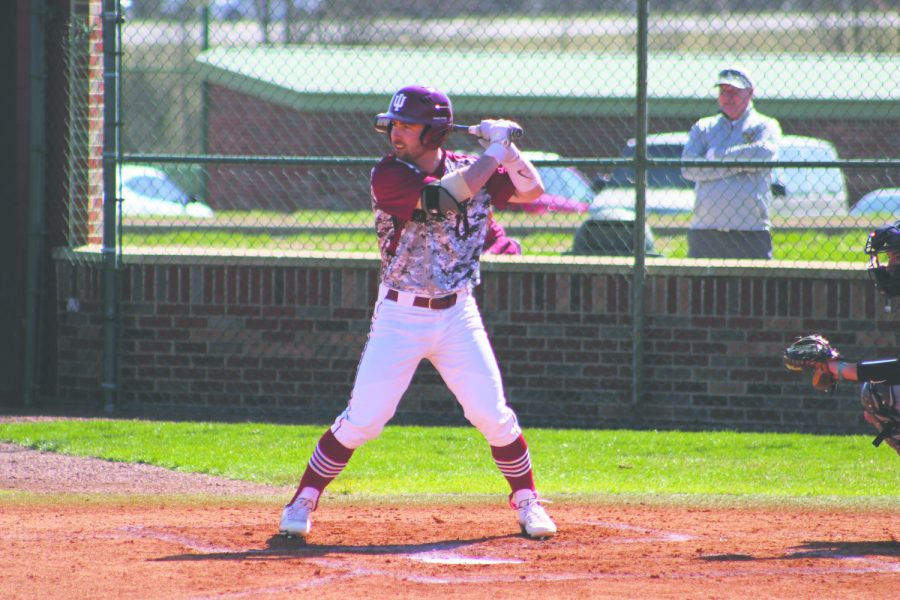 Nolan Rogers, senior outfielder, stands in the batters box in a game at the IU Southeast Koetter Sports Complex. Rogers is a graduate transfer from Vanderbilt University, where he was a part of their 2014 NCAA World Series championship team. Photo courtesy of Angie Branz

For a team with 15 seniors, a young decorated coach, and an All-American shortstop, IU Southeast baseball gave every indication of getting over the edge of last year’s shortcomings. Then they added a World Series champion.

Nolan Rogers is a graduate senior outfielder who played three years at Vanderbilt and won the Division I World Series in 2014. Now, he joins his brother Gage Rogers, senior pitcher, in his second year with the Grenadiers. He said although he had options, he believes he made the right decision in coming to IU Southeast.

“I think I made the right decision to go to Vanderbilt, played three years, got an education from there. I could have went somewhere else to play. Not bragging about that really, I just kind of wanted to relax and have a fun year for my last year and end on my own terms as well,” Rogers said.

Rogers attributes his teammates as his favorite aspect about his move to IU Southeast. He said they’ve helped him smooth the transition to this stage of his career, and said he feels lucky. He said he’s found a home in the winning culture built at IU Southeast.

Adding Rogers could be a crucial piece in solidifying a World Series team, according to Ben Reel, IU Southeast head baseball coach.

Despite his accolades, Rogers said he feels he has to earn his keep all over again, saying he’s just another piece to the puzzle they haven’t solved yet. He said he’s noticed some differences from the Division I experience, but is impressed by the raw talent already on the roster.

“I really do think that I have to earn it. Just because where I come from and what I’ve done in the past doesn’t necessarily subscribe me to a leadership position,” Rogers said. “There are guys that have been here for four years, they’ve worked their tail off with these players and these coaches, so I have to earn that.”

Though he admits his plans have changed since the start of his collegiate career, he said he’s fully embraced his new start at IU Southeast, and is pursuing his graduate certificate in organizational leadership and communication. A graduate transfer has allowed Rogers to play with his brother for his last collegiate year of baseball, and he said he’s all eyes on the future.

“I think, obviously, I went to Vanderbilt thinking I had a future in baseball, beyond Vanderbilt. But coming here, I don’t have any regrets whatsoever,” Rogers said. “I knew what I was getting into, and I fully embrace everything and fully accept everything. What happens in the past is in the past and you can only focus on the present and what’s coming in the future.”

Rogers said his personal experience brings personal expectation, but said he’s noticed a greater anticipation since joining this year’s group. He said he feels all the pieces are in line to make a serious run, and it’s a matter of staying focused and healthy on the goal at hand: bringing home a NAIA Division II World Series title.

“I expect a lot of things from this team. We’re full of leadership, full of seniors and upperclassman. I think we can achieve everything we put our minds to and the goals that we set for ourselves going forward for a World Series run,” Rogers said. “That’s the ultimate goal and that’s what we’ve been talking about since day one.”