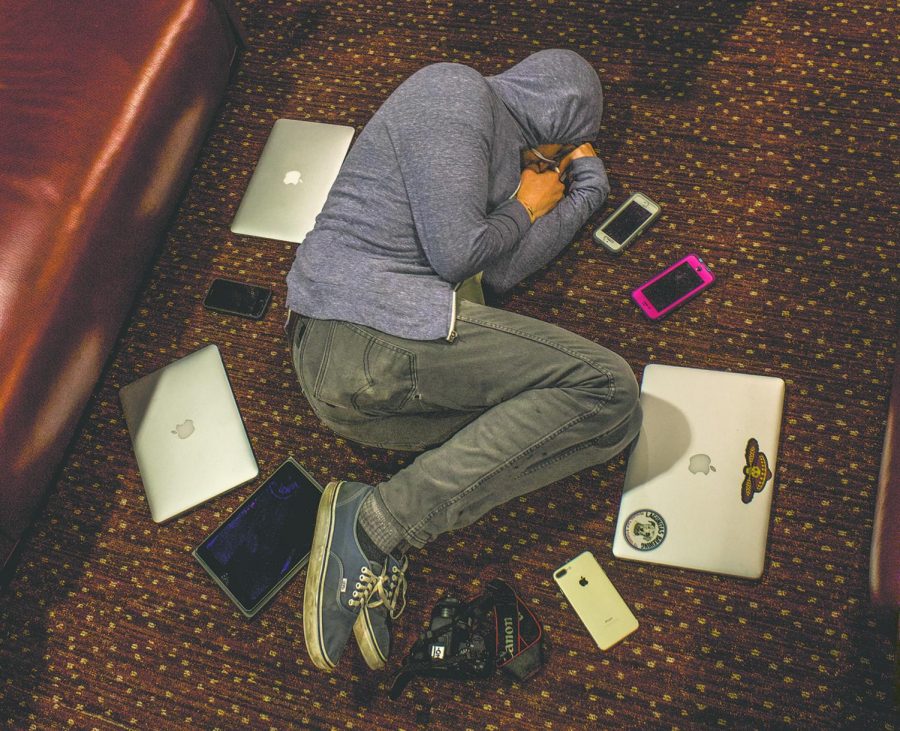 Cheyenne Layton, accounting senior, rolls over to check her phone as she does every morning before she gets out of bed. Today is different, however, because today she can only check the time.

Layton, and two other IUS students, are participating in an experiment that gives them no access to social media including: Facebook, Twitter, Instagram and Snapchat. His or her phones now may only be used for text or phone call conversations.

Layton spends most of her free time on social media to keep updated on everything around her. For many millennials, social media is a tool to stay connected to friends — and even celebrities — lives at the touch of a button.

“The idea of it is very simple, but also very difficult at the same time,” Siederman said.

According to a recent study completed by the American Press Institute, 88 percent of millennials get their news directly from Facebook. This means only 12 percent are using other news sources like newspapers, news stations, radio and other news sites.

Twitter is mostly used by millenials to keep up with the world and people are them. Out of those surveyed, 43 percent say they use Twitter to see what is trending, while 40 percent use it strictly for entertainment — whether that be video, content or listicles.

Millennials spend an average of 40 hours per week on social media. That is as much as a full time job. As many as 54 percent of millennials are afraid of missing out on something if they were to not have access to their phones and social media.

With social media constantly updating, it is easy to get behind on the latest news.

Donta Hickson, sociology senior, usually spends at least six hours a day on social media with his favorites being Instagram and Snapchat.

Due to this, he struggled with fighting the urge to check and see what his friends were doing.

Siederman explained that he did not necessarily feel the need to constantly check what was happening on social media, but found himself behind on things that were going on around him because he was not getting the constant updates.

He typically uses Instagram the most out of his social media apps, but during the time in which he gave up social media, his Facebook would have been more useful because of an event he was involved in.

“I was pretty behind all day,” Siederman said.

Layton said during the experiment, she kept receiving updates from social media notifying her of her friend’s posts. She says it was hard not to look at what was being posted because naturally she wanted to check.

Layton recalls wanting to tweet out her thoughts and having to stop herself from logging onto Twitter to update her followers. She spends an average of five hours on social media each day.

Siederman brings up the point that when in class, if the lecture is not interesting, he will open his social media apps to help pass the time.

“This realization came over me like ‘wow,’ I could have been learning so much more over the course of college if I wouldn’t have social media,” Siederman said.

He jokes that without the distraction of social media, he could possibly cure cancer with his spare time.

“I felt very behind on a lot of things,” Layton said.

She goes on to explain that she keeps up to date with her sorority sisters via their Facebook page and during this time she was unable to know what was going on.

Layton says the experiment was therapeutic to her. It has made her want to give up social media for a few hours each day so that she can relax.

“It gave me time to think for myself and not see everyone else’s opinions and thoughts,” Layton said.

Hickson said he used his spare time to catch up on homework and household chores to help pass the time.

“It was nice to have the time to actually get things done,” Hickson said.

Siederman said the longer he went without the access to social media the easier it got. It became part of his new routine away from the cyber world.

“It really opened my eyes to want like a physical communication line for our generation because [millennials] are very reliant on social media … that face-to-face interaction is something we really lack,” Siederman said.

This idea was seen among all the students who participated. They all agreed that millennials are very reliant on technology to communicate as opposed to generations before them that focused on other means of communication.

Hickson brings up the point that our society focuses a lot on what others think of us and the things that we post. He said that this is a big problem for us and could possibly be fixed if people did not spend so much time online.