While the decline of cigarette smoking has become evident, the upward trend of vaping has taken its place among young adults 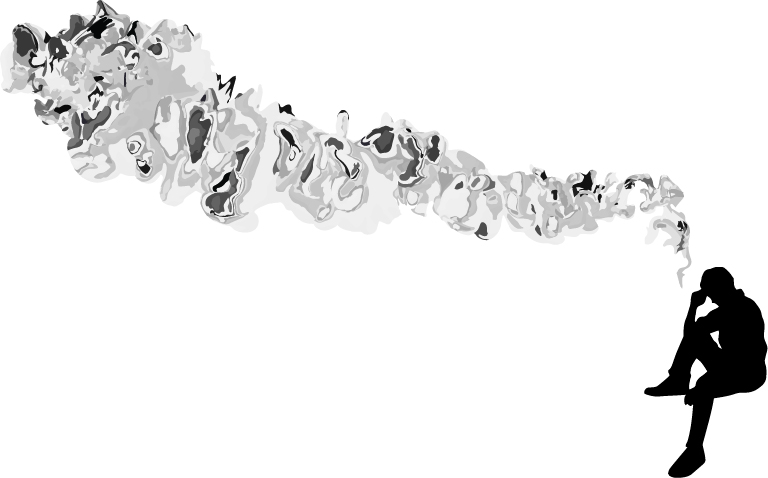 The days of metaphorical cigarette smoking as seen in “The Breakfast Club” are over. Instead, it’s being replaced with a new technological invention — vaping.

The Center of Disease Control (CDC) conducted research in 2016, finding roughly 13 percent of adults aged 18 to 24 still smoked cigarettes, with the number increasing over four percent from adults aged 25 to 44.

While the numbers still represent a nation which enjoys its cigarettes, the total number of people who smoke daily decreased from 80.6 percent in 2005 to 76.9 percent in 2013.

Though the decline of cigarette smoke has become evident, young adults are still consuming tobacco through other sources.

The use of vape pens or electronic cigarettes (e-cigs) has taken the tobacco industry by storm. Along with vaping, hookah has seen an increase of six percent among high school students since 2011.

“Older generations tend to be more skeptical of change and prefer to stick to the ways that they know,” Ian Parks, journalism sophomore, said. “Change is harder for older generations to learn.”

The numbers continue decreasing for the younger generations, but nearly 18 out of every 100 people aged 45 to 64 still smoke cigarettes.

Parks, the assistant manager at New Cloud Vapor Lounge, acknowledges frequent customers at his store that have made the jump from paper and tobacco to the electronic alternative.

“I will say that our store has numerous older clients and have made the switch from smoking to vaping for their health,” Parks said. “And, we even see in the U.K., doctors suggesting vaping to their smoking patients.”

“Kicking” a bad habit is difficult itself, but nicotine has clutched the lives of millions of Americans and has a hard time letting go.

Some of the benefits found in switching from smoking cigarettes to vaping include getting rid of bad odors, stained teeth and increased cardiovascular health.

Vaping has even gone on to replace caffeine for some, as the stimulant nicotine releases stress, waking people up in a similar manner as coffee or energy drinks.This alternative has swept over colleges around the world, assisting in both a healthier habit and a means of increased morning productivity.

However, there are many benefits to the change that go unnoticed by non-smokers.

“I would say the start-out cost for a good setup and juice will probably run around $90,” Parks said. “But the repeat costs will vastly outweigh the cost of cigarettes.”

Smokers who buy a pack of cigarettes spend up to $6 to $7 daily, while the cost of part-replacements and the occasional refill of e-liquid for e-cigs is around $15 per month.

The costs vary from product to product, but the outcome remains the same — short-term investments lead to long-term rewards, some of which can be life-saving.

David Abrams of NYU College of Global Public Health gave insight in a press release regarding cigarette smoking and the increased use of vaping products in the United States.

“Studies show that if most current American smokers switched to vaping e-cigarettes over the next 10 years, there could be as many as 6.6 million fewer premature deaths and 86.7 million fewer life years would be lost,” Abrams said.

Overexposure to the Youth

The alternative to cigarette smoking has its benefits for the smokers wishing to better their health, but major tobacco companies continue to push their agenda.

Its counterpart, the major e-cigarette companies, continue their battle as well, reaching 14.4 million youths through retail stores and 21.1 million through digital marketing, according to the CDC.

While parents battle the continuous exposure to their children, it is important for the vaping community to help parents understand their intentions.

“The number one problem for a vape shop is trying to make sure that we keep all of our products out of the hands of underage users,” Parks said.

Of course, some convenient stores do not follow FDA regulation and do not check for personal identification to verify a person’s age.

The start of a tobacco habit can come at different ages in life, though the Parks and New Cloud Vape Lounge try to keep their products out of the hands of underage users.

“People are free to smoke or vape if they choose, we just don’t want children or teenagers to go around hitting their vapes or Juuls, and the blaming the vaping industry for their behavior,” Parks said.

As with cigarette smokers, those who vape have to follow several laws at both state and federal level.

The state of Indiana has gone through issues with laws which allowed private security companies to monitor e-tobacco manufacturers.

The same companies that pressed for the law being passed had connections to the same lobbyists who advanced the law through supreme court, until the monitoring was deemed unconstitutional and loosened vaping laws.

“[The vaping industry] wants to get through the constant attacks against us from the FDA, the tobacco companies and the United States government together,” Parks said.

Though unspoken rules exist among the community, there are issues that still need to be addressed that are not always done so through federal regulations.

“Don’t walk into a local grocery store and start blowing huge vapor clouds and expect everyone to be okay with it,” Parks said. “Be respectful.”

For now, vaping continues to be a healthier alternative to cigarette smoking.

For more information on successfully transferring smoking habits to vaping, the CDC recommends talking to your doctor to discuss potential risks.