“A Quiet Place” shuts audiences up

In a time where booming action films dominate the box office, “A Quiet Place” brings the noise with a deafening silence 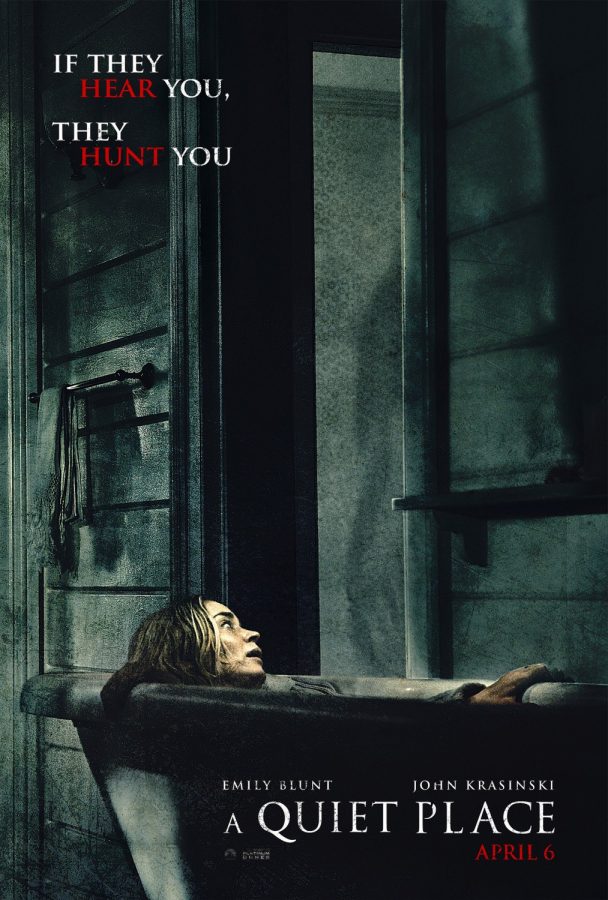 The crunch of a few kernels of popcorn in your mouth. A big gulp of the large drink you bought to wash it down. The little whispers throughout the film from people in the audience offering their commentary on what just took place on the big screen.

These are only a few of the characteristics which go along with any movie going experience. They still apply to the audiences seeing “A Quiet Place,” but they are seen in an entirely different light.

“A Quiet Place” hit theaters across the country on Friday, April 6. The 90 minute horror film delivers exactly what an audience hopes when going to see a movie like this. It’s not too long, it’s not too short, it’s suspenseful and thrilling, it will make the audience jump, and most importantly, a terrifying antagonist.

Although, one could argue the most horrifying feeling in the theater doesn’t come from the big screen at all, but from the embarrassment felt when making slightest noise in the theater.

With roughly 90 lines of dialogue in the entire film, the theater becomes exactly what the title indicates — a quiet place. Every sound is amplified times 10 during the points of silence.

It truly is something the audience must experience in the theater because it will not be the same in your living room.

With the audience noises stealing the headlines, the acting brilliance displayed in the film has gone somewhat under the radar.

John Krasinski (Lee Abbott and director) and Emily Blunt (Evelyn Abbott) take their real world marriage to the big screen for the first time. The chemistry from their off-screen marriage had to play a pivotal role in their performance in the film.

Blunt plays the mother of the family, faced with the challenges of overcoming a tragic loss in an almost “post-apocalyptic” world. She certainly earned herself a “Best Actress” nomination with how she steals the show and captivates the audience with her performance on the screen.

Millicent Simmonds (Regan Abbott) also displays a great performance in her young, but budding, career as an actress. The deaf actress portrays the daughter of the family and doesn’t have any problem showing what it is like to live in a world absent of sound.

Not only is he a talented actor on the screen, but in only his third stint as a film director, Krasinski delivers the best of his young directing career. The suspense only builds from the start, culminating in a sequence which should leave the audience on the edge of their seats for the last 30 minutes.

Lastly, the backstage crews deserve a huge round of applause for creating such a fantastic and eye-appealing “post-apocalyptic” type world. The rural farmhouse with the christmas lights lighting up the land give a “Stranger Things” vibe to the film — when the lights go red you know stuff is about to go down.

Movie lovers should absolutely go through this unique experience in the theaters to get the full effects of the film. Only finish your popcorn before and stop talking when it starts if you’re scared of getting the “shhhhh” crowd or, even worse, the one person who’s not afraid to yell a “shut the hell up.”