How to Successfully Thunder

A Survival Guide for Thunder Over Louisville 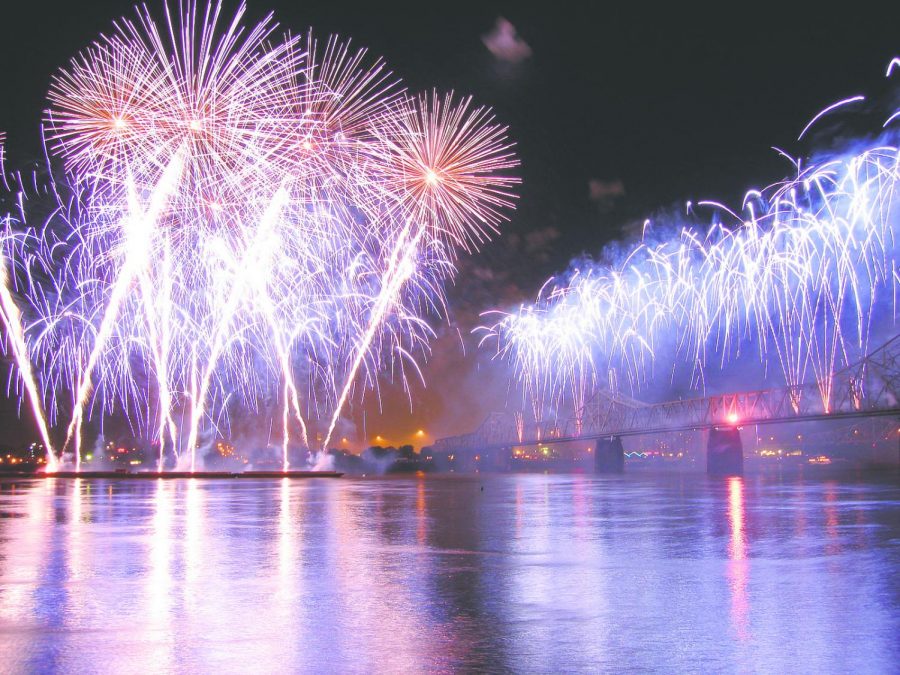 The smell of funnel cake and Coors Lite fill the air, vibrations of aircrafts echo over the Ohio River and fireworks fill the sky after the sun sets. Life is good, you’re at Thunder Over Louisville.

Kentucky is known for many things, one of which is Thunder Over Louisville, the largest firework show in the United States. This show brings in people from all over the country and guarantees one thing — complete and utter chaos.

If you had the privilege of growing up in the Kentuckiana area, the disordinance of this event is nothing new. However, to those from far and wide, there are some tips that may be beneficial before taking a nosedive into swarms of people.

City locals know that to get the best view possible, you must arrive early. By early I don’t mean an hour or two, oh no. By early I mean you need to arrive around noon, even though the firework show does not begin until 9:30. Why? Because people are going to be fighting their way onto The Great Lawn from morning until the show begins. Pack up your lawn chairs and blankets and get ready to make yourself at home for the rest of the day. Think of it as camping out for the newest Apple product, except it’s a firework show and you could’ve watched it from home instead.

Don’t Let The Warmth Fool You

Typically, early April days are warmer than early April nights. Oftentimes Thunder-goers will arrive wearing shorts and short-sleeves and regret that decision when the temperature drops and leaves them shivering the rest of the cold, sometimes damp, night.

So be extra cautious when deciding your outfit for the day and bring some extra blankets just in case.

Fellas, bring blankets for your girl. You know she’s going to get cold and complain about it the second the sun sets and it’s all your fault because you didn’t bring a blanket.

What About Food? What about BEER?

Besides the fireworks, if there’s anything that makes Thunder Over Louisville notable, it’s fried food. Funnel cakes, fried Oreos, fried cheesecakes, fried everything. The porta potties aren’t going to be the only thing that’s clogging that night — as are thousands of people’s arteries.

Don’t feel like paying steep festival prices for overrated fried goods? No problem, just bring your own. Outside food is allowed on the premises, just make sure to tell uncle Larry to leave his alcohol at home, as outside alcoholic beverages are not allowed.

However, alcoholics don’t worry, ice cold Coors Lite will be sold all night long so don’t be afraid to fill up that good ole red solo cup.

May The Parking Spots Be Ever in Your Favor

Make sure to check road closures in your area, because they will absolutely be closed. Find your best route to get the best view, whether you watch from the Louisville or Indiana side.

When considering where to park, make sure to park about four or five blocks away to avoid some traffic on your way out. A little walking has never hurt anybody. Well, technically it has but it’s Thunder, toughen up buttercup. It’s survival of the fittest.

You may have to bury your pride and pay for parking, depending on what time you arrive or if you just want the best spots possible. However, if you’re balling on a budget, side streets work as well.

Put Your Phones Away

When faced with the biggest firework show in the United States, taking photos and videos as a keepsake is expected. But, once you’ve had your fill of photos, put your phone away and take in the raw beauty that is Thunder Over Louisville. You only live once, you know.

When watching the show, there will come a climax to the fireworks where they are erupting off every second. Most people believe this is the end of the show and begin leaving immediately after, not realizing there is more to come. If you wait it out for about a minute or so, the real finale paints the sky with vivid colors and indeed sounds like thunder (hence, the name).

However, if you want to beat the awful traffic that is sure to ensue, go ahead and get out after the first fake finale. Most of the time, you will be able to still watch the real finale blasting in the sky as you make a run for it to your car. This does NOT guarantee however that you won’t still get caught in traffic for three hours wondering if it was even worth it.

But rest assured, you will inevitably end up forgetting that feeling and come again next year in shorts and a tank top.