We are your citizens, too 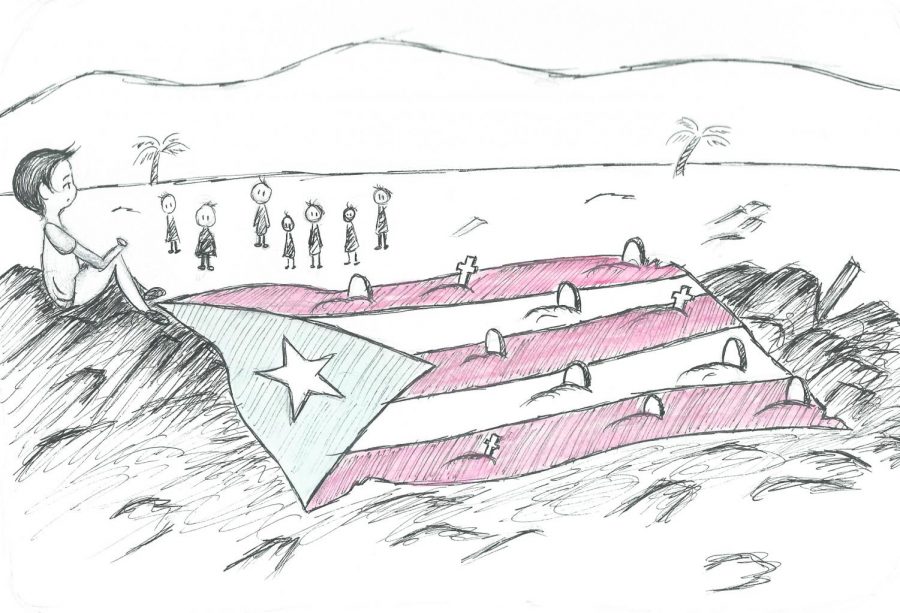 Jennifer Ortiz, assistant professor of criminal justice, was not able to reach her grandfather for three months after Hurricane Maria hit the island of Puerto Rico. He was without power, water or food. The people from the town of Naguabo did what all Puerto Ricans do in times like these, they took care of each other. He was alive, and Ortiz said she was relieved.

Ortiz was able to finally get a flight to Puerto Rico in April 2018. “The island looks like it was set on fire. It’s not the same luscious green,” she said.

Everywhere she drove, she said there was no power. She saw barbers cutting hair outside, and signs that read, “without power since Maria, PLEASE HELP.”

On Thursday, Sept.13, the nation awoke to the common flurry of early morning tweets from President Donald Trump. But on this day there was one tweet that was so controversial that members of the GOP, like Florida Gov. Rick Scott, are distancing themselves from the president.

Trump tweeted his refusal to acknowledge the deaths of nearly 3,000 U.S. citizens from Hurricanes Irma and Maria that hit the island of my birth, Puerto Rico. In the president’s tweet he said that when he visited the island there were only six to 18 deaths at the time, and only later that year did the death toll grow.

He also took the opportunity to blame Democrats for trying to make him “look as bad as possible.”

Being on the eastern tip of the Leeward islands, the U.S. Commonwealth of Puerto Rico and its over 3.3 million residents are no strangers to hurricanes. But on Sept. 20, 2017, during the height of the 2017 Atlantic hurricane season, the island experienced a category 4 hurricane that changed the lives of thousands of Puerto Ricans.

Hurricane Maria was the second storm to hit the island in 10-day period. The first hurricane, Irma, was a Category 5 storm that gave Puerto Rico a glancing blow. Even though Irma was not a direct hit, the island still experienced rains driven by 100 mph winds.  There was an island-wide power loss, and a loss of access to fresh water. Irma claimed four lives.

In the days before Hurricane Maria hit Puerto Rico its strength fluctuated between category 4 and 5. When it finally hit it was a category 4 hurricane with sustained winds of 155 mph. While not the strongest category of storms, it was still powerful enough to completely collapse the Puerto Rican power grid and cut off all drinkable water to the islands’ residents.

In the days and weeks that followed, the relief and recovery efforts were sluggish at best. There were several hurdles that needed navigation. One hurdle was the now well known Merchant Marine Act of 1920, or the Jones Act. This act basically requires any shipments to Puerto Rico must be off loaded on the mainland United States and placed on a different ship for the last leg to the Port of San Juan. The Jones Act adds time and cost to any product being sent.

Eight days after the storm, Congress waived the act for a 10-day period. The act was extended through Sept. 22.

Relief supplies arrived, but sat on the docks waiting to be distributed. In a report by NPR, Sept 28, 2017, “Diesel is short. Drivers are scarce. And authorities say some roads are still impassable.”

CNN published an article on Aug. 14, 2018 that read PREPA, the power authority in Puerto Rico, had restored to the grid 11 months after its collapse, but that is not entirely true.

The grid is back up and running, but according to some members of my family in Puerto Rico, they still do not have full restoration of power because they lack the essential final connection from the grid to the structure. Time frame for this final repair is unknown but my family is working with PREPA to get the work completed.

After being born in my grandmother’s house in 1968, my mother and I came to the “states” in 1969 when I was an infant. We already had family in New York so my mom went to join them. Through the years my mom and I became my mom, stepdad, and three other brothers and a sister. The kids grew up and left the nest and my mom moved back to Puerto Rico.

The vast majority of my family, 11 aunts and uncles and an untold number of cousins and extended family, are still on Puerto Rico. I have one uncle in Florida and some cousins in the greater New York area, nearly everyone else is still in the same town I was born in.

I have a large family, which makes the worry so much greater. All normal means of communication were nonexistent. We couldn’t call in, and they couldn’t call out. Me and my family in the states were beside ourselves. My sister went to the airport in Orlando everyday for about a week trying to get a flight to the island to check on our relatives, but all flights were reserved for relief personnel. We did not hear from my mother until 12 days after the storm.

My mom got a ride from her brother, a police officer in San Juan, to a cell tower near the San Juan airport to call us. The call was only long enough to hear her say, “I’m okay and the house is still up.” It would be approximately two months before we heard from her again. She currently resides in Florida with my sister because her home is still without power.

It stands to reason that the death toll grew so large because of the collateral deaths. I feel the president only counted those that died from direct hurricane related incidents like a tree falling on their house and killing the occupants. What he and many others fail to realize is that without power and fresh water, normal life cannot be supported.

Multiple news outlets from the New York Times to the Associated Press all document the lack of basic utilities, power and water being the two most basic. Medicines went bad, air conditioning did not operate, and according to an article by CNN, Dec. 20, 2017, morgues were so overwhelmed with the dead that some morgues just buried the bodies.

Independent studies have been conducted by Harvard and the Puerto Rican government and both came to the same conclusion, the were many more victims of Hurricane Maria than six to 18.

President Trump consistently insults our citizens first by throwing paper towels at them, then by saying that the Puerto Rican relief efforts are “breaking the budget.” This non-acknowledgment of the deaths of our citizens is just another slap in the face in a long line of slaps. Puerto Rico has been a colony of some nation, first for nearly 400 years by Spain and now by the United States since 1898.

The suffering was and still is great. The repercussions of this storm will be felt for generations.

I was frantic until I heard from my mother and relieved when she left our ancestral home. But we Puerto Ricans have a saying, Puerto Rico se levanta. This saying has become our purpose; it means that Puerto Rico rises.

I do not claim to have a solutions, but something has to change. Regardless of your political affiliation, deaths are deaths and should be acknowledged and mourned.