To beef his own

Getting to the bottom of America’s beef with Colin Kaepernick 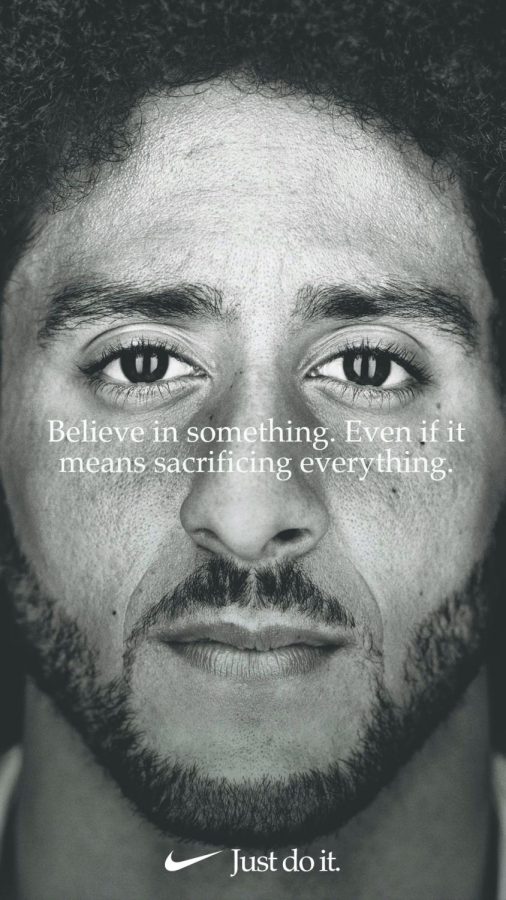 What’s beef? Christopher “Notorious B.I.G.” Wallace asked this same question in 1997. In 2018 though, beef seems to be more satisfying than ever.

If we want to understand “beef” and its nature, we should ask ourselves, “What’s the meaning of beef anyways? Why is it so appealing in today’s culture?” The Cambridge Dictionary states that having a “beef” or “beefing” with someone entails to complaining about something or having a grievance.

It is without question that “beef” has become the king of popularity in today’s society. Holding a grudge against someone could help gain some attention. Embracing conflict seems like a necessity for reputation. A grievance is next to godliness. Everyone has the potential to take advantage of their own disadvantages. So what are we left to do?

Although beef seems satisfying to the ones that are in it, how can we use it to our advantage? Knowing your facts, and knowing where you stand — or kneel.

Since the 2016 season, Colin Kaepernick has been against all odds with the National Football League. The former San Francisco 49ers quarterback began to kneel during the national anthem in response to police brutality. His efforts in resistance displayed a new patriotic approach: Kneeling in the name of unarmed African American death.

For the last two seasons, Kaepernick has been out of a job with the NFL and he may never see the field again. Traditional American patriotism quietly repelled his efforts, making him a political casualty. When the flag is raised, the general response is to support. It is not appropriate to kneel in the name of racial inequality in this country.

Since his risky act of patriotism, Kaepernick has inspired a new wave of American outrage and political bashing of his character. This is clearly an example of beef at its prime: old patriotism versus new patriotism.

One would think that his political stance towards police brutality fulfills American values. However, it hasn’t stopped onlookers from believing he is still disrespecting the American flag and what it stands for.

On Sept. 3, Nike released an ad in celebration of their 30th anniversary. It showed Kaepernick’s face along with many other prominent sport figures. “Believe in something. Even if it means sacrificing everything,” was the quote which took Nike from a household name to a new political powerhouse. Nike consumers were demonstrating their political stance through what seemed to be “senseless destruction.”

Although Nike initially suffered a three percent drop in total revenue, their sales jumped up 30 percent within days of their campaign ad. Overall, they’re profiting from the power of people’s emotions.

Whether good or bad, any form of controversy, especially when it’s a societal beef, grabs the attention of everyone. Nike used beef to their advantage, in a way that has never been seen from any major brand.

It is clear that today’s millennials are redefining patriotism, yet, there are several Americans who are outraged. Even in the new Madden 19 game, EA Sports treated his name is it were a curse word. The game’s publisher issued a statement saying that although they don’t have rights to include Kaepernick in Madden 19, it isn’t grounds to effect the Madden soundtrack itself.

For Kaepernick, this adds more slander toward his efforts in social change. Even though some may view his stance as a disadvantage, his political acts have prevailed as an advantage.

The NFL wouldn’t give Kaepernick a job, but Nike found a job in supporting him. It is very seldom in society for politics to crossover to
popular branding.

Americans may feel disgruntled by Kaepernick’s simple acts, they may continue to burn their Nike clothes and cut any sort of cloth the resembles the iconic
Nike “swoosh.”

Meanwhile, Kaepernick’s ad generated $43 million in media exposure in one day, according to Bloomberg. Indeed, he’s amidst a controversy worth beefing for.

Any average American understands we live in a nation of indulgence. Surely, we could be doing things which fall in line with our well-being. But, beef and controversy are more attractive than ever in our lifestyles. We love to put our political gloves on in the comment section. We define our legacies with a
single hashtag.

Therefore, if we must dare to tell our truths in all caps, we must keep in mind the power of all facts. So, what’s the beef you bring to the table? Does it speak for itself? Or do you beef that up too?