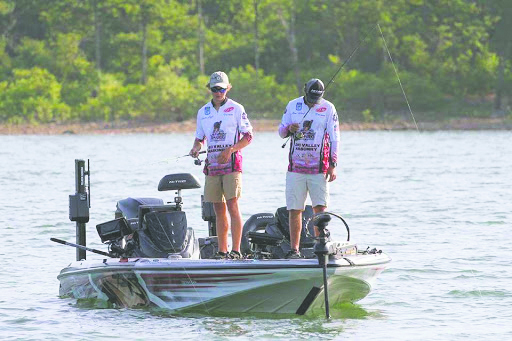 Normally when a sports team forms for the first time, it usually takes a few years for it to build a successful foundation. That would not be the case for the newest IUS athletic squad, Bass Fishing. The program, a club sport, is only a semester old and has already shown great success despite its young age.

The team formed back in January of this year, when soon-to-be associate head coaches Christopher Crews and John Hibbard began to discuss the possibility of creating a fishing team at IU Southeast.

“John Hibbard and I fished together over the past couple years,” Crews said. “At one point, he mentioned that it would be neat to have a club on campus.”

The two began discussing what that club would look like and how student bass fishing clubs are becoming more popular at the high school and collegiate levels.

At the beginning of the spring semester, Crews and Hibbard, the latter who is now at IU Bloomington, began to post fliers around campus about an informational meeting to form the school’s first bass fishing team. To the men’s surprise, 17 people would arrive to inquire about the club. Within three weeks of meeting, club bylaws were drafted, and student officers were elected.

Now that they were an official student organization, the next step was to be recognized by a key part of the university; the Athletic Department.

“Joe Glover, our athletic director, he was very on board with it, and we almost immediately got that approved through him as well,” Atom Ward, club president, said. “We got through it so fast on the athletic side, and we haven’t even fished in our first tournament yet. We were still an idea in essence.”

That would change on May 10, when the athletic bass fishing team, composed of two teams of two anglers each, competed at the 2018 Carhartt Bassmaster College Eastern Tour at Cherokee Lake, Tennessee. The tournament, which consisted of 263 teams in total, would be the first true test of such a young program.

Such a test would be passed, however. At the end of the three day event, Ward and club vice president, Gavin Lagle, finished 93rd, beating out teams including IU Bloomington, the University of Kentucky and the University of Louisville among others. The other duo, which consisted of Mitchell Stone and Tommy Tidstrom, finished 243rd.

With two tournaments under the team’s belt, they ventured west in July for the Carhartt Bassmaster National Championship, held at Lake Tenkiller, Oklahoma, which would be a daunting task for the young Grenadier program, not just for it being their first postseason event, but also for the conditions that would come with it.

“We practiced [before the tournament], and it’s really tough fishing. It’s brutally tough. It’s 105, heat index at about 120,” Ward said. “We ended up getting into a pattern on the last day of practice.”

The pattern they got into would pay off, as they finished the first day in eighth place out of 117 teams. They would finish the tournament ranked 30th, still unheard of for a team in its inaugural year.

“It’s been a really exciting run.” Ward said. “The key now is to solidify our foundation,” Ward said. “As president, my goal is not to look at the beginning of the club anymore, and instead look at how to make this last in the long term. How to make Indiana University Southeast Bass Fishing one of the top names in the college bass fishing world.”

Editor’s Note: The version of this story published in the Sept. 17 print issue included a headline which stated the Bass Fishing team had won a national championship. The team did not win the national championship, but placed 30th in the tournament. The Horizon regrets this mistake.