For the 6th year, roughly 5,000 pumpkins are being carved and lit in Iroquois Park in spirit of Halloween 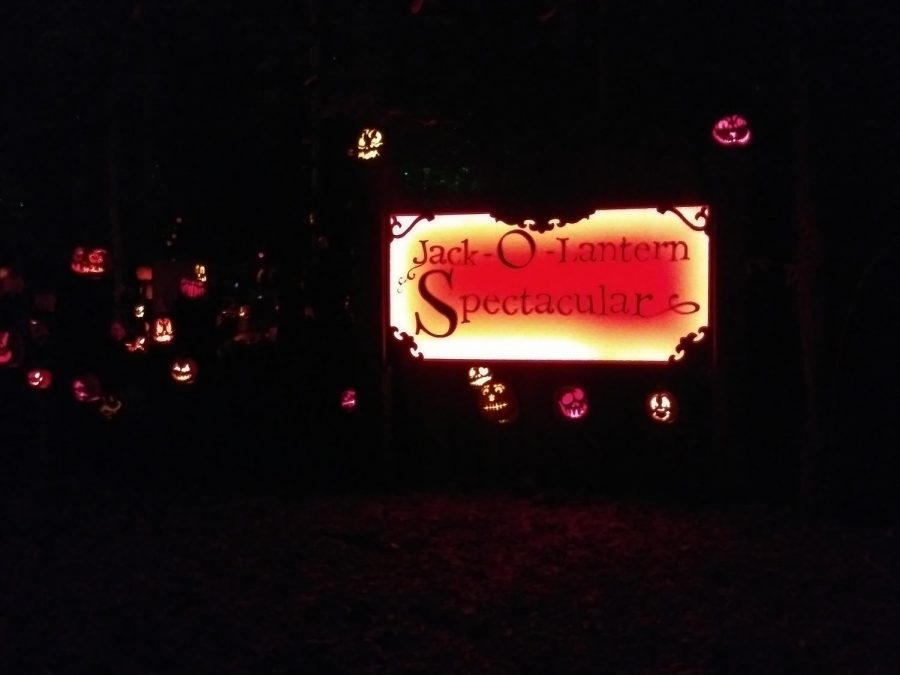 The sign introducing the event at the beginning of the trail.

Gather your families and celebrate the season with glowing festive pumpkins.

The Jack O’ Lantern Spectacular in Louisville is an event that has grown largely over the years, bringing in thousands of visitors each year to view over 5,000 lit pumpkins. The event is available Oct. 9 – Nov. 4.

The event was created by Passion for Pumpkins, Inc., an organization that has been in the works for 25 years, illuminating pumpkins in various parks such as parks in Rhode Island and Louisville.

Although the event has created entertainment for the community and beyond,  it came to Louisville to donate to the Metro Parks Foundation, a non-profit organization which helps expand and improve existing parks and developing parks.

“That is honestly one of the coolest parts about being a part of this. We aren’t only creating an art show, but we are helping preserve and improve the parks in the Louisville area, and that is a great feeling,” artist Lydia Held said.

A new theme is created for the event every year. Last year, the theme was “A B C,’s” and this year, the theme is “A Night at the Library.” People will walk through the trail with pumpkins associated with the genre of the book chosen for each section, playing music to go along with the theme.

“It is an amazing thing to be a part of,” said one of the artists, Katie Schreiner. “You don’t realize how wonderful it is until you see it all come to life on the trail.”

The trail is about a quarter of a mile long and contains an immense amount of pumpkins with various sizes. The pumpkins range from small, simple carvings to massive and elaborate carvings.

“You don’t realize how much work it takes until you have sat there for hours covered in black ink trying to get your drawing perfect,” Heid said. “Pumpkins are full of bumps and lumps. It’s not like drawing on a canvas or a piece of paper.”

The event recruits carvers from all over the country to display the best shows and artistry possible. Some of the artists of the event are local, but many of them come from out-of-town to participate.

Katie Schreiner is an artist who lives in Michigan and has come to Louisville the past three years for the event. She says it is her favorite line of work and wishes she could do it all year.

“I look forward to coming here every year,” Schreiner said. “Creating these pumpkins is hard work, but it is all worth it in the end when you see how much people enjoy the show. It’s like peeking a glance into a whole other illuminated and bright world and you never know what to expect.”

Melissa Dykes is also an out-of-town artist who lives in Missouri. She has only been able to attend a few days to create her pumpkins because of her job, but she still finds a way to make her way to Louisville.

“I wouldn’t miss it for the world. I have made a lot of friends through this, and it is something I will always try to be a part of,” Dykes said.

The event has become a significant part of the community and according to Dykes, it will continue to do so for many years to come.

“There is nothing else quite like it,” Dykes said. “Any functioning person can carve a little jack-o-lantern, but it’s not every day you get to see pumpkins like this, and it is most definitely worth seeing every year.”