Let me cast my ballot

Why is it so hard to vote in America? 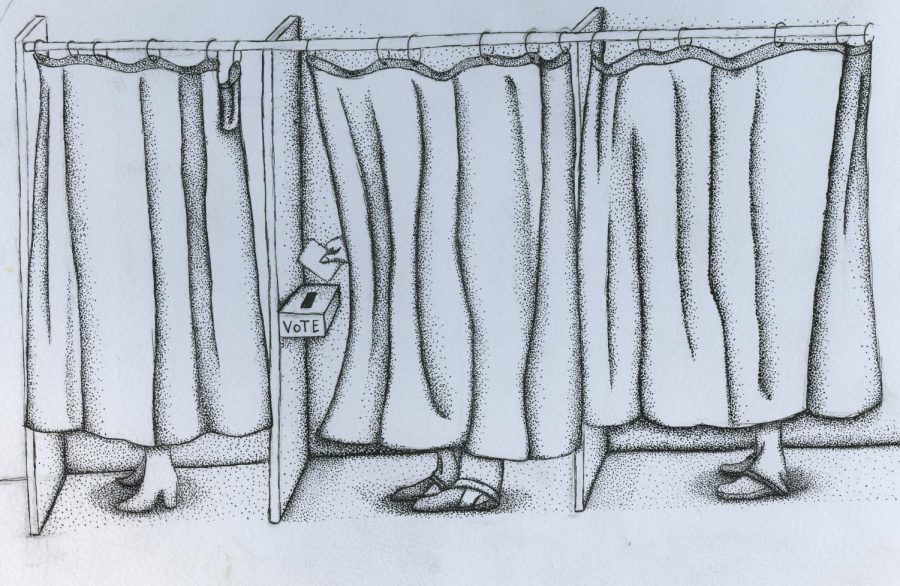 In every American politics class, it seems one particular question always comes up – is voting a right or a privilege?

The answer, of course, is that it’s a right. The 26th Amendment to the U.S. Constitution states: “The right of citizens of the United States, who are 18 years of age or older, to vote, shall not be denied or abridged by the United States or any state on account of age.”

Free and open voting is at the core of any democracy. So why is there such an effort to restrict voter turnout?

Voter registration and its many hurdles

I’d like to start by saying this – same-day voter registration should be offered to every American. Unfortunately, as of May 2018, only 18 states and the District of Columbia allow voters to register on Election Day. (Maryland and North Carolina allow same-day registration during the early voting period.)

Here’s how it works: In states without same-day registration, election officials use the time after their registration deadline and before Election Day to verify voters’ addresses. When residents go to the polls to register on Election Day in one of states where it’s allowed, they’re required to present proof of residency and an ID, though states have varying requirements for these documents.

The arguments against same-day registration include the risk of ill-informed voters and a waste of government resources.

Matthew Gagnon, a former staffer of the National Republican Senatorial Committee, wrote in the Bangor Daily News: “The only people I want anywhere near a ballot box are those who have demonstrated they are actually invested enough in the process that they want to vote. That is the flaw with same-day voter registration: Most of the people it serves are unengaged in the process.”

Gagnon’s argument is invalid because — although the law has several restrictions on being eligible to vote, including being of age and not being a convicted felon (rules vary by state) – being educated is not one of those requirements. Neither is being engaged, for that matter, although of course that would be good.

In the 2018 Indiana legislative session, two bills were introduced to implement same-day voter registration, both by Democrats. Senate Bill 287 was authored by Tim Lanane, the Senate Minority Leader from Anderson, and House Bill 1018 was authored by Representative Clyde Kersey from Terre Haute. Neither bill was heard in committee.

Indiana and Kentucky have the earliest poll closing times in the country – shutting down their polling booths at 6 p.m. It’s no coincidence these two states consistently see lower voter turnout compared to the rest of the country. Less time means less opportunity, and for residents who work, have class or a number of other inconveniences, voting before 6 p.m. can be difficult. 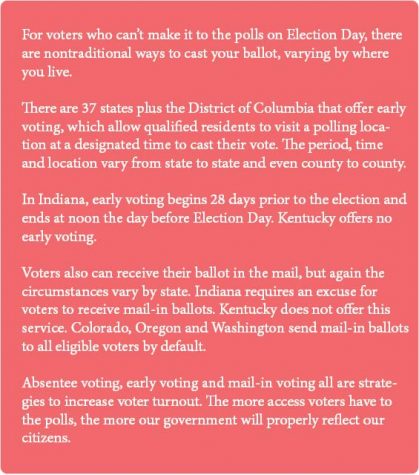 In this year’s Indiana legislative session, state Senator Karen Tallian, a Democrat from Portage, introduced SB 304 to extend the polling times until 7 p.m. This bill was never heard in committee.

When you show up to the polls on election day, you’re going to have to prove who you are. Depending on where you live, the requirement to prove your identity can vary from your signature to a government-issued photo ID.

In Kentucky, an ID is required but not a photo. Indiana has strict photo ID requirements.

What this means is in Kentucky, a driver’s license, Social Security card or a credit card are acceptable forms of identification. If you happen to have a personal relationship with the precinct officer and they can vouch for you, that’s also acceptable.

In Indiana, the laws are much more strict. A photo ID is required or the voter will have to submit a provisional ballot, meaning they’ll have to follow up with their election office after Election Day.

These are the Indiana’s requirements for identification:

2. Display the voter’s name, which must conform with the voter registration record

3. Display an expiration date and either be current or have expired sometime after the date of the last General Election (Nov. 8, 2016)

4. Be issued by the State of Indiana or the U.S. government

A student ID from a public university that meets the four requirements above is an acceptable form of ID. Crimson Cards are acceptable forms of identification to place your vote.

But at some point we have to stop and ask – why is it so hard to prove my identity? And why does it vary so drastically from state to state?

Those who support stricter voter-ID laws focus on the issue of voter fraud and claim these ID restrictions can improve voter confidence in the election system.

Those against stricter voter-ID laws argue that these laws impose an undue burden and that the amount of voter fraud is miniscule.

In my opinion, stricter voter-ID laws are political strategies to hinder specific groups from showing up at the polls.

In July, President Trump said at a rally: “Only American citizens should vote in American elections. Which is why the time has come for voter ID, like everything else.”

I’m sure you’re thinking, well if someone is a U.S. citizen, what’s the big deal with requiring them to show a photo ID? All you have to do is go to the Bureau/Department of Motor Vehicles, right?

Studies have shown that minorities are less likely to have identification. In 2017, The Washington Post conducted an extensive study of the effects of voter ID laws.

From The Post: “Hispanics are affected the most: Turnout is 7.1 percentage points lower in general elections and 5.3 points lower in primaries in strict ID states than it is in other states. Strict ID laws mean lower African American, Asian American and multiracial American turnout as well. White turnout is largely unaffected.”

With the myth of voter fraud being debunked, it’s undemocratic that all I need, as a Kentucky resident, on Election Day is my credit card or a utility bill, while my friends across the river in Indiana have more restrictions to voting.

Gerrymandering and its misrepresentation

To reflect changes in population, states are required to redraw their legislative districts after each U.S. Census is conducted, which is every 10 years. Some states can redistrict more often.

In Indiana, the majority party at the time of redistricting leads the way in reforming the districts, something that can, and does, lead to partisan districts.

For example, if I’m the majority leader of the Indiana Senate and I know I’m not very popular with minorities in Indianapolis, I’m going to try to put them in their own district. This is because I know there are more rural areas nearby in which I’ll get more support.

Instead of mixing minority voters, who I don’t think support my platform, into other districts, I’ve chosen to lose just one district but win others in the surrounding area.

In this year’s Indiana legislative session, Senate Minority Leader Lanane proposed a bill to have the districts redrawn by an independent, nonpartisan commission. The commission’s goal would have been to “create, hold hearings on, take public comment about, and recommend plans to redraw general assembly districts and congressional districts.”

Unfortunately, this bill was never heard in committee.

Anna Murray, the Democrat state Senate candidate in District 46, said on her website: “Through the process of gerrymandering, it is possible to stack the deck and determine the outcome of a district, such that even if every voter of the gerrymandered party turned out, that they could never win in their district.”

The basic tenet of democracy is that each citizen has proper representation. If that is being manipulated to favor one party over another, how democratic is our government?