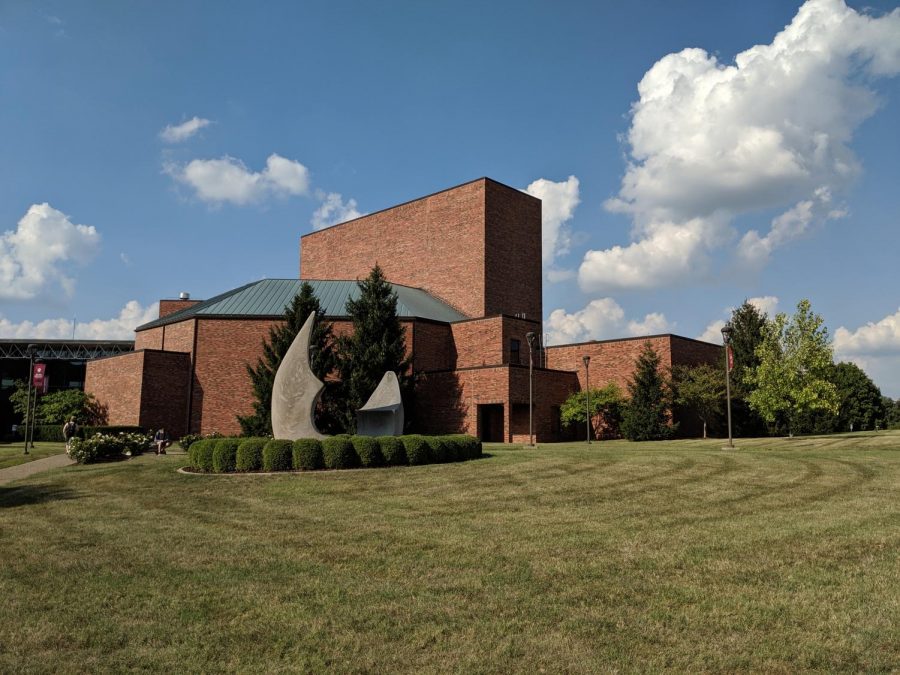 The “Hope’s Harbor” sculpture sits in front of Knobview Hall and the Ogle Center. File photo by Bryce Shreve.

One incident of rape and three incidents of dating violence were reported on the IUS campus in 2017, according to data from the Clery Act report released earlier this month.

According to the National Center for Victims of Crime, dating violence is defined as controlling, abusive or aggressive behavior in a romantic relationship. It can include verbal, emotional, physical and/or sexual abuse.

The most reported issues at IU Southeast were Referrals for Disciplinary Action – Drug/Liquor Law violations. While 12 drug violation and 37 liquor violations were reported to campus police in 2017, only eight drug arrests and one liquor arrest were made.

“Most referrals we get are for liquor or drugs, we’ve never had any major crimes like murder or arson here,” Travis Huntley, IUPD lieutenant, said.

Huntley said compared to the University of Louisville and other nearby schools, IU Southeast is a safe campus overall.

“Statistically, we’re one of the safest campuses in the country in terms of Clery numbers,” Huntley said.

What is the Clery Act?

The law is named after Jeanne Clery, a 19-year-old Lehigh University student who was raped and murdered in her dorm in 1986. At the time, campus crime reporting standards didn’t exist. Clery’s parents, Connie and Howard, set out to change that.

Signed into law by George H. W. Bush in 1990, the law promotes transparency regarding campus safety. Since the Clery information is available to current and prospective students, potential applicants are able to research their college to see their safety numbers.

Crime logs must include the most recent 60 days of information. Crime statistics must consist of the most recent eight years of crimes that occurred on campus, as well as institutional residential facilities, off-campus buildings and public property.

How To Improve Campus Safety

Active shooter — recently renamed “active aggressor” — training sessions are held by IUPD officer Monica Burnell-Wise. They are held once per semester, and any time IUPD has a new hire or a session is requested by a student or faculty member.

Beginning in May, students can participate in a bystander awareness course, championed by IUPD Chief Stephen Miller.

“It’s a trauma-informed sexual assault training session that aims to promote being aware of the victim’s feelings,” Miller said. “It promotes a much more sensitive approach to sexual assault than what has been done in the past.”

Burnell-Wise asked that students speak up if they see suspicious behavior.

“If you see something, say something,” Burnell-Wise said. “If we get a complaint that is a concern to a student or faculty member, we do act on it.”

When it comes to situational awareness, Lieutenant Huntley says individuals should refrain from looking at their phones while walking around.

“Don’t always be walking around with your face buried in your phone, look up once in a while,” Huntley said. “No matter how weird or uncomfortable something is, report it. You can never be too cautious.”

If you see a crime occurring or have reasonable suspicion, contact the police: Campus Police is located in University Center North, room 027. They can be reached at (812) 941-2400.