Bohemian Rhapsody is a safe and often shallow biopic 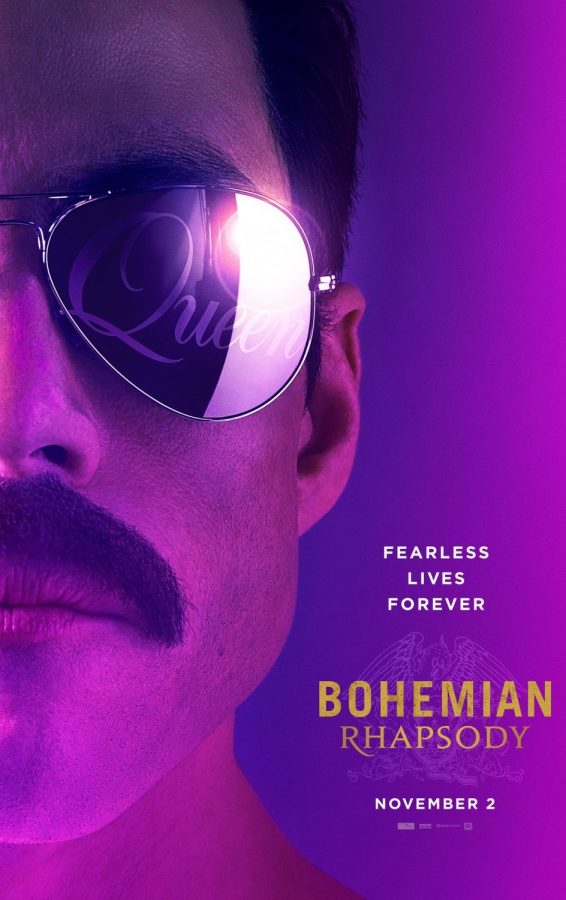 Rami Malek stars in the much-anticipated “Bohemian Rhapsody,” the 2018 biopic of iconic rock band, Queen. The film follows Mercury and the rest of Queen — Brian May, Roger Taylor and John Deacon — from their early years playing pubs in college to their rise to rock-and-roll stardom.

While the story advances well, it does not do so at a consistent or logical pace. The first act of “Bohemian Rhapsody” moves uncomfortably fast, and a few leaps in the film leave the viewer with a lot of questions.

At one point, time moves forward five or more years and it is mentioned in a throw-away line that Roger has a wife and kids now. Expanding on this could have made for some interesting storytelling.

Throughout the movie, Queen’s greatest hits help engage the audience move the story forward. However, the film and director Bryan Singer can’t take credit for that aspect.

The rest of the film follows every beat that one can expect from a biopic, carried heavily by Malek’s acting. Malek executes Mercury’s showmanship and flamboyance well, no matter how distracting his prosthetic teeth are.

A slew of corny trailer-worthy quotes are spread throughout the movie, from “fortune favors the bold” to “you’re a legend, Fred”.

One shining moment from the film featured Mike Myers’s character telling the band that no radio station would play their music, and that the song “Bohemian Rhapsody” is not a song that “teenagers will turn up on the radio and jam to in the car.” The irony is that Myers starred in “Wayne’s World,” a film featuring that exact scenario to that exact song.

The Problem with Biopics

Biopics have been quite popular in the recent months. Last month, “First Man” told the story of Neil Armstrong and “Rocket Man” will delve into the life of Elton John in early 2019.

The main problem biopics frequently suffer from is that they are safe and all too predictable. More often than not, they add nothing to what is commonly known about their subject matter.

In the case of “Bohemian Rhapsody,” the subject matter is hardly touched at all. Seeing a biopic about Queen, one of the most famous British rock bands in history, a moviegoer might expect to learn a good amount about every member’s life.

That doesn’t happen in this motion picture.

Freddie Mercury is iconic — truly larger than life. So much larger than life that 20th Century Fox could only fit highlights from his Wikipedia page into “Bohemian Rhapsody,” and left only cliffnotes for his bandmates.

It’s a challenge to add drama or compelling storytelling to stories and events that have already happened, but signing on to produce a biopic requires exactly that. If you don’t want to be tasked with that challenge, just make “Transformers 27.”

Fans of Queen and Mercury will enjoy the film as a Wikipedia page with a greatest hits playlist, but those looking for a compelling story about the rock icon’s life will leave empty handed.