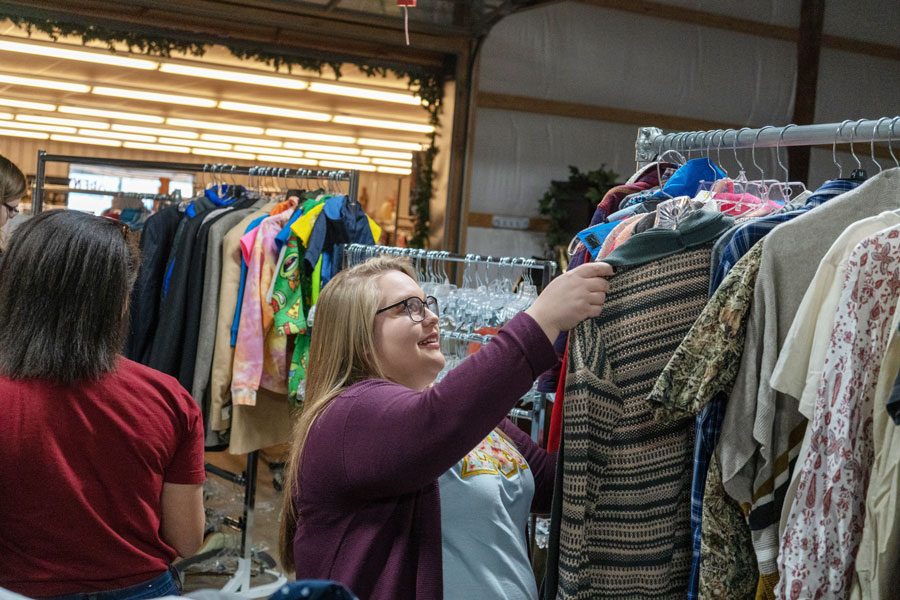 Betty Collard hangs a shirt onto a rack in the sorting room. Students would put clothes on hangers so they were ready to be sold in the front of the store.

January 21, 2019 celebrates the life and legacy of Martin Luther King Jr., activist and leader of the civil rights movement. An American federal holiday, MLK Jr. Day is a day off for workers and students across the nation.

Students from IU Southeast and volunteers from around the area volunteered their day off of work and school to serve their community. Volunteer activities included sweeping up litter in an animal shelter and playing bingo with elderly residents of a long-term care facility.

Animal Protection Services
Around ten students arrived at 9 a.m. Monday at the Animal Protection Services in downtown Jeffersonville to help clean the building. Students who visited the small building were tasked with deep cleaning the various rooms in the shelter. Some students pulled out cabinets and swept behind desks while others scrubbed the insides of cages and the various cat trees scattered throughout the building. The shelter was far from empty, with around fifty cats watching the busy students clean their home.

Most of the Shelter’s day-to-day operations are done by volunteers, who spend their time feeding and taking care of the animals. They don’t have extra time to clean the building on their shift.

“They’re doing the deep dive kinda cleaning… its a huge help and we are so thankful for everybody that came out today.” said Denise Koenig, one of the supervisors at Animal Protection Services.
The Mustard Seed
In Sellersburg, 20 students worked in the back room of the thrift shop, “The Mustard Seed”. Some students sorted through bags of clothes clothes in the back of the store while others made sure the clothes on display had the right price tags and size markers.

Another group was in charge of stamping refillable brown paper bags with the mustard seed logo. By stamping their own bags, they can keep costs down. Any clothes that don’t pass inspection are fed into a hydraulic press nicknamed “the beast”. The compressed clothes are then bundled up and sold to a distributor.

The staff is made up of volunteers, but Marie Diehl and Jenn Spendlove, two of the coordinators at the shop, are always thankful for extra help.

“It’s helping speed us up, and it’s stuff we would normally have other volunteers do… it’s just more volunteers than we usually have,” Spendlove said.
Autumn Woods
Over a dozen IU Southeast students volunteered their time at Autumn Woods Health Campus for this year’s Martin Luther King Day of Service. IUS students spent time with Autumn Woods residents while they attended worship, bible study, and prayer. They continued to stay with their residents and attend a few rounds of bingo, assisting the residents and playing along as well.

Autumn Woods is a long-term care facility and rehab facility. It is one of the only care facilities in the area with dementia secure units. Residents with dementia can wander wherever they want, as all doors in that part of the unit are secure by key pad and doors appear painted as bookshelves, therefore easing the mind of patients when confused.

Among the volunteers was Bryce Alford, criminal justice junior. Alford has volunteered at Autumn Woods to play music in the past.

“I like overall being able to spend time with elderly people, they’re great to be around,” Alford said. “Very positive, outgoing people.”

Autumn Woods encourages long-term patients to decorate their rooms as they would at home. In one room in particular, one of the resident’s family put up a “winter tree” to help their family member with dementia remember what time of year it was.
Green Valley Care Center
Sixteen students from various student organizations came together to serve at Green Valley Care Center for MLK Day of Service. Students and residents painted necklaces, made paper crafts, beaded peace signs, played cards and even sang some songs around a piano.

The residents are taken care of by a staff of nurses, but enjoy the company of volunteers as they don’t get to meet groups of new people often.

Many of the volunteers spoke of how much they enjoyed the experience, including sophomore psychology major Brandon Wilson, who was volunteering at the center for the second time.

“We did it last year with just [Pi Kappa Alpha],” Wilson said. “Just hearing all their life stories, it’s cool getting to hear. It’s really important because some of these people may not have family around to come visit them and so they have us come here to visit and keep them company.”

The staff emphasized to the volunteers that the crafts weren’t just busywork; they carried a message. While everyone started with the same materials and goal, all of them ended up different and beautiful. The theme of individualism was present in everything the residents and volunteers created.

“I really just wanted to make a difference, and maybe give some people a better time than they would be having,” said freshman accounting major Noah Roerig. “You know through us they’re probably having memories of their childhoods, which may be the best times of their lives. I just like seeing them smile and having a good time.”

In addition to the paper crafts and beading participants created, there were several card games going on in the dining room. Cards were not originally on the agenda,, but were suggested by a small group of Pi Kappa Alpha members, giving residents who weren’t interested in crafts an opportunity to meet the volunteers.

As their card games were ending, freshman physical therapy major Daniel Kiningham and sophomore business major Jon Will played piano for the residents.

“I came here with a group of guys because they were all coming, but honestly if I could come here by myself, this was a fun time just to even spend with these people. They have awesome stories and they would tell us about their lives. This is a great way for [students] just to learn about the generation before us and see how much different it is from our generation,” said Will.