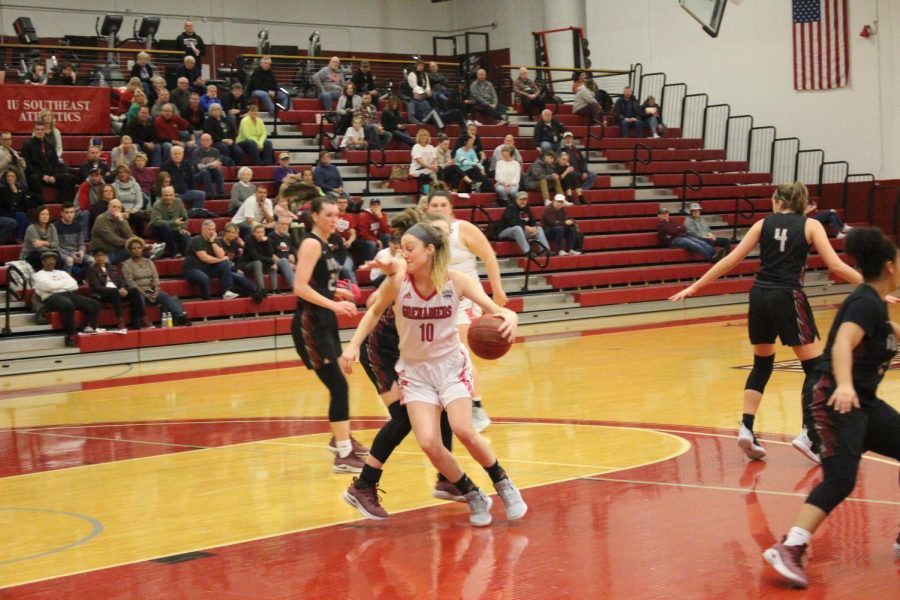 The IU Southeast women’s basketball team managed to turn the corner after starting 2019 in the midst of a six-game losing streak. Starting with Oakland City on Jan. 14, the Grenadiers would win four in a row, which brought their record to 12-10. With the momentum, they came into the Activities Building Saturday, Jan 26, looking to pick up a win as they hosted rival IU East in a critical River States Conference matchup.

At first, the Grenadiers looked as if they would run away with the game, going into halftime with a 38-21 lead. That would change as the Red Wolves would rally behind a barrage of three-pointers in the second half. They also utilized their defense to fuel the rally, forcing 11 Grenadier turnovers to eventually come out on top 76-71.

“In our defensive transition, we couldn’t get back to find shooters,” head coach Robin Farris said. “We gave them too many wide open three-point shots and we turned the ball over.”

From the opening tip, the Grenadiers took control, starting the contest with a 19-6 run led by the senior duo of Josie Hockman and Kelsi Scott — who each scored six in the period. Not only did they have a large lead on the scoreboard, but also on the backboard, out-rebounding the Red Wolves 11-4 as they ended the first quarter with a 23-11 lead.

The second quarter would start similarly to the first, with the Grenadiers kicking it off with a 10-4 run. The Red Wolves again had trouble knocking down any of their shots, ending the period having shot 32 percent as opposed to the Grenadiers’ 53 percent. Hockman would score 10 of her 14 points in the first half as the Grenadiers went into the break holding a 38-21 advantage.

Once the third quarter began, the Red Wolves proceeded to rally back into the game, starting the period with a 17-9 run. The Grenadiers would counter with a 9-4 stretch of their own, ending the quarter with a 56-41 lead.

The final quarter would see the Red Wolves make one final push to take the lead, led by senior Libby Springmeir, who scored 11 of her 15 points in the final frame, as part of a 20-12 run. With 43 seconds left, the Red Wolves took advantage of a Grenadier turnover to take a 71-70 lead behind a three-pointer by freshman guard Addie Brown.

Down by four with 11.6 seconds left, guard Lauren Lambdin was fouled and had an opportunity to bring the Grenadiers back to a one-possession game. While the first shot found the bottom of the net, miscommunication between the Grenadiers led to an offensive lane violation, negating the first shot.

“We were going to press and I wanted Josie [Hockman] in to rebound,” Farris said. “So as we went to make the change, the referee threw the ball to [Lambdin] and you can’t switch after that. They didn’t give us much time to set it up.”

Lambdin did make the second shot, but it would make no difference, as the Red Wolves would sink a pair of free throws by Brown to seal the deal with a 76-71 victory.

Despite the loss, Scott again paced the Grenadiers in scoring with 20 points, along with eight rebounds, three of which were offensive boards. Hockman had 14 points, while Lambdin contributed with 11.

Brown led the way for the Red Wolves with 21 points and was made half of her eight shots from behind the arc. Springmeir (15), Amanda Worland (14), and Niomi Dube (10) also scored in double figures.

The Grenadiers followed this defeat by going on the road the following Tuesday to defeat Alice Lloyd 78-67, followed by taking care of business at home against Kentucky Christian with a 73-63 victory.