What happens at night to keep IU Southeast operating? 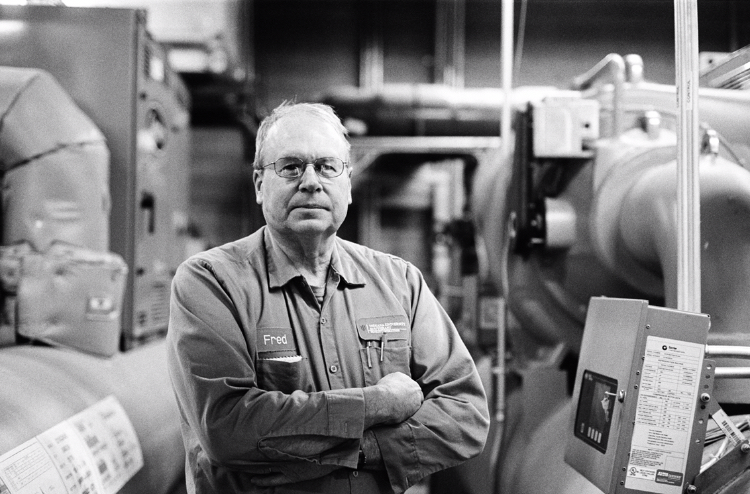 After classes are finished and students are heading back home or to the lodges, some faculty are just arriving on campus to make sure it’s ready for the next day of classes.

“What you do represents what this campus is all about and our responsibility is the safety, health and wellbeing, and the comfort of all who visit our campus,” said Fred Jackson, a maintenance technician for Facility Operations at IU Southeast.

The Facility Operations building is hidden on the north side of campus, but has many functions. It stores pumps to keep water running, holds equipment to fix mechanical and electrical issues, has computers that manage the entire campus, and staff ready to address any issues on campus.

Jackson has been at IU Southeast for nine years and works second shift, arriving in the afternoon and leaving in the middle of the night. “Fifty percent of our shift is in the dark so you are at the mercy of the elements in the night,” Jackson said.

Besides raccoons, Jackson has dealt with skunks, snakes and overflowing dishwashers in the night.

Working closely with maintenance technicians, custodians also work through the nights, cleaning classrooms, offices, the Activities Building, bathrooms and computer labs. “I work in UC so it’s open 24 hours and certain nights it’s busy; you have the gamers and students studying,” said Beth Hogan, a custodian of 20 years for IU Southeast.

Beyond the late night study sessions, Hogan said he does not interact too much with students. However, there have been creatures in the dumpster that keep her on her toes when taking trash out at night.

“Its head was stuck in the dumpster, is that the story you’re talking about?” Hogan said.

A squirrel was stuck in the dumpster one night when Hogan went out there as part of her nightly routine. Feeling some compassion, Hogan said she got help from co-workers and saved the squirrel.

Even though Facility Operations does deal with animals often, Jackson said students are “the recipients of your work.”

Jackson said he enjoys talking to students, learning what their interests are and what needs to be done around campus. He spends a lot of time in housing and said having the dorms “has been good and the housing staff has been excellent to work with.”

Interacting with students and staff has never been a problem for Jackson or Hogan as they both said they feel  their work is appreciated. “I have never done a job over in housing in the nine years that I wasn’t thanked at least twice before I got out the door,” said Jackson.

Hogan agreed and has noticed that adult students and the Human Resources department are especially appreciative. She said she feels like she is really here for the students and enjoys getting to work at night, making sure campus is ready for the next day.

Megan Perkins, chemistry education senior, takes night classes and has seen the custodians working while she does homework in the evenings. “We have a great custodial staff here; they work really hard. I don’t think people give them enough gratification,” Perkins said.

Throughout her 20 years at IU Southeast, Hogan has been a crew leader and has worked first and third shift. When she worked third shift, she said she was never afraid of being in buildings alone or walking outside in the night.

Jackson has had the same position throughout his time at IU Southeast and enjoys getting to help students and visitors on campus. One evening, he was able to help many different people as three elevators got stuck within an hour of each other.

He fixed the first elevator and there was “jubilant celebration” from five students when the elevator doors opened. He then headed over to the Ogle Center, fixing another elevator that had three ladies ready to see an evening show. Jackson said there are many electrical and mechanical issues that are addressed right away, even if the maintenance technicians are busy working on something else.

“There are standing working orders every day,” Jackson said. To the workers, prioritizing is a big part of their job as they strive to keep campus as safe and secure as possible.

Part of keeping campus secure is working with the IUS Police. Facility Operations often works with the police to clean up wrecks, air up car tires, and fix sprinklers and smoke alarms that go off in the middle of the night.

Team members from Facility Operations are always on call and remain ready to serve the IU Southeast campus. So, what happens at night to keep campus operating? People keep working.