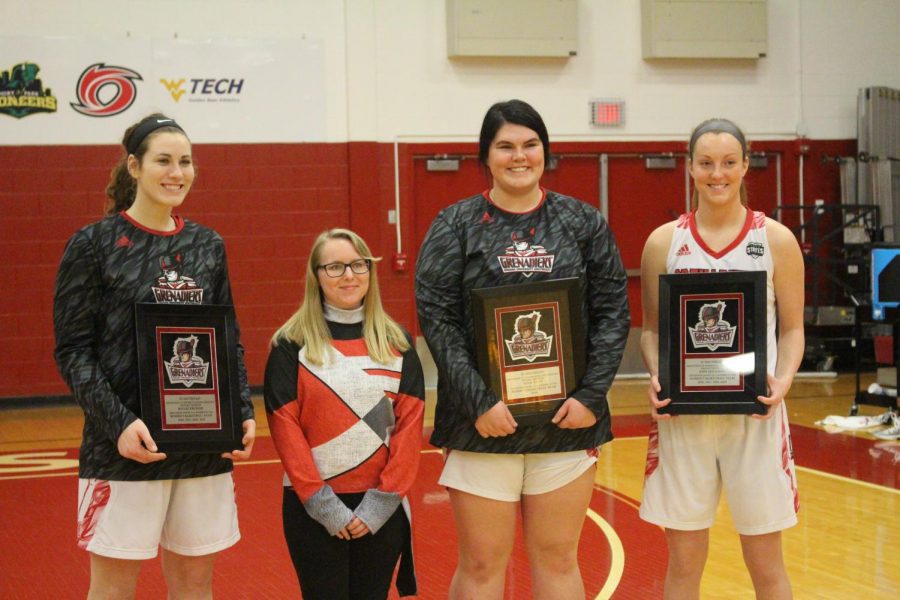 Prior to the start of Thursday night’s home finale at the Activities Building, the IU Southeast women’s basketball team honored its trio of seniors, which include four-year players Josie Hockman and Baylee Kreuger, as well as senior transfer Kelsi Scott.

“They’ve been really consistent and that’s why we have a winning record right now,” head coach Robin Farris said. “I think they’ve been good leaders and played well this year, and that’s what you hope for from your seniors.”

Visiting Brescia would hold on late to spoil the festivities with a 69-65 victory in River States Conference play.

The first quarter saw neither team gain too much momentum. Despite Scott dominating the interior, scoring 12 of her game-high 27 points, along with pulling down three offensive rebounds, the Bearcats kept pace with 4-for-7 shooting from behind the arc. One of those threes was a buzzer beater from senior Aaliyah Rogers, giving the Bearcats a 21-19 lead.

The second quarter was a back-and-forth affair, with each side turning the ball over three times in the period. Going into the break, the Grenadiers trailed the Bearcats 36-32.

Once the second half began, Brescia would take control, taking advantage of several Grenadier missed shots and fouls as part of a 15-7 run. Riding a 10-for-12 effort from the charity stripe, led by senior Catherine Dunn’s perfect 6-for-6 in the period, the Bearcats ended the third quarter with a 60-48 advantage.

When the final period began, the Grenadiers looked to make a comeback for a second consecutive game, starting with Scott making a pair of free throws. Over a minute and a half later, she would get fouled on a put-back, converting a three-point play to bring them within five. She would make two more free throws, followed by junior Madi Woods converting a layup to make it a one-point game.

“Obviously, it didn’t go the way we all hoped it would go,” senior Baylee Krueger said. “We do have some grit to us. Players like Lauren [Lambdin] and Ariana [Sandefur] can get us hyped up when things aren’t going our way.”

Despite a three by Bearcats sophomore Cassidy Moss and a field goal by Rogers, the Grenadiers kept the game to a single possession. That would soon change when with 19 seconds left, Scott was called for an offensive foul near the basket, essentially sealing the game’s fate. While Woods would score inside once again, it came between free throws from Dunn and Rogers to put the game out of reach.

“We got outplayed and out-hustled for about 33 minutes,” Farris said of the loss, “When we finally decided to play and hustle, we had a chance, but it was too late.”

Scott finished the night with a double-double, 27 points and 13 rebounds, six of which were offensive boards. Josie Hockman scored nine with seven boards, playing all 40 minutes. Krueger would score seven, three of which came from behind the arc early in the game, along with seven rebounds and a pair of blocks.

With the loss, the Grenadiers are now only a single game ahead of Midway, who beat the Bearcats 62-57 two days prior, for the fourth seed in the RSC West. The Grenadiers next game will see them travel to face the Midway on Saturday, Feb. 9. Tipoff is scheduled for 1 p.m.

After the near comeback came up short for the women’s team, the men entered the Activities Building looking to handle business. The Grenadiers won big with a 103-69 victory over Brescia, improving their River States Conference record to 11-4.

The Grenadiers started quickly, forcing 11 turnovers to go up early, leaving Brescia in a hole they could never climb out of. Senior Jamie Johnson put up 30 in the contest, sophomore David Burton had 18, and sophomore Glenn Hill put up 20 points, a season-high for him. Senior Kerry Smith didn’t play, but said the environment was electric, praising the effort by his teammates. Smith had to sit out because of an ejection against Asbury, the previous game.

“Glenn HIll stepped up for sure. He played great defense and rebounded really well.  David Burton was another who played well. At this point of the year, you pretty much know what to expect from Jamie Johnson. He had an outstanding game,” Smith said. “They played extremely hard for 40 minutes. Sitting there watching them play that hard made me feel good.”

Smith said the team has found a new sense of urgency, and it’s becoming “eat-or-be-eaten” as the season turns its final corner. They focus on the importance of showing up ready to win for every game from here on out, according to Smith. Though three regular season games remain, Smith said time is starting to run out.

“It feels amazing. Feels like a huge accomplishment., It’s a feeling I will remember for the rest of my life,” Smith said. “Next for me, my goal is to try and make it overseas. If that doesn’t happen, I’d like to get into my career and put my creative business to work.”

Replacing guards like Johnson and Smith will lead to opportunity, which sophomore Lukas Burkman said sparks a “next-man-up mentality”, and said you can’t ever find two guys like those two seniors.

“The environment was very supportive and had more energy than ever. It was truly great to see the love for the seniors who built this program to where it is today. [I’m] sad, but happy,” Burkman said.

According to Burkman, what made the Grenadiers effective Thursday night was their communication, togetherness, and the pride the take in their defense. With a win, the Grenadiers improved to four straight wins and a 19-8 overall record.

The Grenadiers’ next game will see them travel to face the Midway on Saturday, Feb. 9. Tipoff is scheduled for 3 p.m.