Fyre Festival and the dueling documentaries 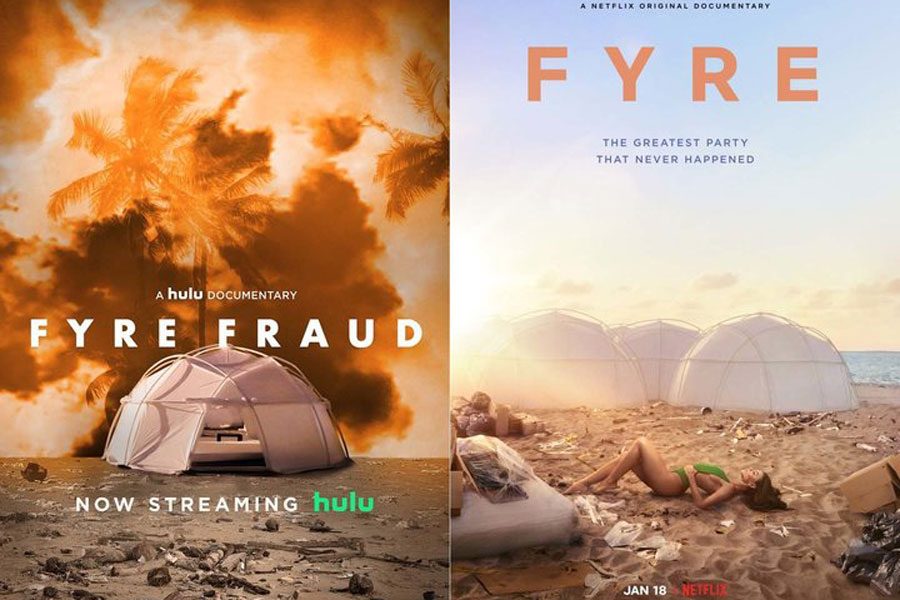 Fyre Festival was intended to be the newest music festival, with hopes of being bigger than Coachella, Burning Man and Woodstock. It was created by Billy McFarland, the CEO of Fyre Media Inc. along with rapper Ja Rule, to promote their new app for booking talent.

But their high hopes blinded the team of the reality and work it would require to pull off such a feat and quickly turned into one of the most infamous scandals of 2017. Guests were promised big name bands, private flights and villas, delectable dishes and tons of alcohol on an island filled with supermodels and high-status celebrities.

They got the tons of alcohol, but not much else.

Netflix and Hulu recently released their respective documentaries on the festival within a week of each other. Both movies shined a light on the ways the Fyre Festival fell short, but in different ways. Netflix covers the inside story of the festival while Hulu takes an outsider’s approach by diving into scamming millennials and the traps of social media.
Netflix: FYRE
The Netflix documentary, produced by Jerry Media, takes a more intimate approach to the story. Jerry Media was in charge of the public campaign to popularise and market Fyre Festival and because of this, they utilized behind-the-scenes footage. McFarland had the cameras rolling at all times, so the documentary had much more firsthand footage than its Hulu counterpart.

The argument can be made that the producers are biased because of how close they were to the planning of the festival, and may be trying to pin more of the blame on McFarland, but it does give the film a unique angle on the story. The people who were interviewed lived through the entire ordeal and have inside information that is harder for someone outside the Fyre Festival to find.

The documentary itself focused more around details of the actual event instead of the past dealings of McFarland. It did a much better job of telling the locals’ side of the story as well as people close to McFarland. It was devastating to see how deeply the event affected these people and how much they lost.

One woman in the Netflix documentary particularly stood out. As the owner of the bar on the site of the festival, she had to pay money out of her life savings to cover her staff who were stiffed by McFarland. She never received any money from McFarland, and the documentary did a great job of conveying her hurt and sense of betrayal.
Hulu: FYRE FRAUD
Hulu tells the story of Billy McFarland—from his young entrepreneur ways of promising his elementary school classmates that he would fix their broken crayons, to promising the party of the century to millennials and scamming them out of hundreds of thousands of dollars. It even uses references to TV shows like “Parks and Recreation” to describe McFarland and his business—like the Tom Haverford of 720 Entertainment.

Viewers even get to see and hear from McFarland himself. This gives the them the chance to form their own opinion about him and his business pursuits.
However, while Hulu offers this opportunity, it comes with controversy. Hulu paid McFarland thousands of dollars to do their interview. So while Netflix may face some controversy over JerryMedia covering their story, Hulu also faces some heat for paying McFarland to get an in-person look at him.

Hulu tackles overarching themes rather than focusing solely on the festival. This documentary takes a dive into the influence social media can have and how one person can feed off of the trust millennials have in celebrity endorsements.

While Netflix covers McFarland’s scams after Fyre, Hulu explores Billy’s scams before Fyre Fest in more detail. We see the process and escalation of his schemes, until we finally see what ultimately leads to such a disastrous event and why customers and team members fell for it along the way.
Thumbs Up
We highly encourage watching these documentaries. Each one includes great interviews between varying team members and customers and there are only a few crossovers between interviewees.

The viewer gets different information, details and points of view from watching both. In one, you walk away with a better understanding of what Fyre Fest was, who was behind it and how it became the failure it was. The other one unveils why: why so many people fell for it, why millenials are so susceptible to falling for such scams and why social media plays a major part in getting away with it.

Together, these films give a wide variety of sources and information, and only together can you see the full view—an inside and outside look at the best party that never happened.