Captain Marvel is a stellar and necessary origin story

While it follows the tired-but-effective origin story formula, fantastic visuals and a healthy dose of humor carry the film to great heights 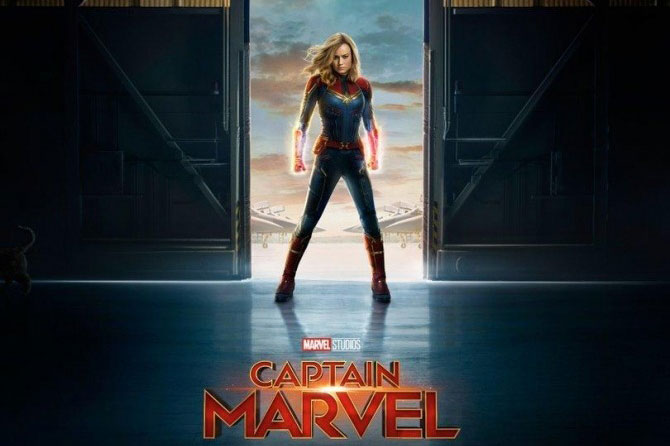 Since 2008’s “Iron Man,” an impressive undertaking of worldbuilding within the Marvel Cinematic Universe (MCU) has been executed thanks to Marvel Studios and the Russo brothers. While their magnum opus “Avengers: Endgame” hits theaters April 26, directors Anna Boden and Ryan Fleck bring a new, key character’s origin story to life in 2019’s “Captain Marvel.”

Love ‘em or hate ‘em, superhero movies have been a defining aspect of the zeitgeist for the 2010s. As we draw nearer to the culmination of this superhero movie renaissance, Brie Larson brings the life of Captain Marvel, formerly known as Carol Danvers, to the big screen.

Set in the 1990s, the film follows Danvers on her path to becoming one of the most powerful heroes in the universe. She finds herself playing an important part in a galactic war between two alien races — Skrull and Kree.

Danvers was an aspiring U.S. fighter pilot who, after a tragic crash, finds herself living as a warrior on the Kree Empire’s capital planet of Hala. After living as a Kree for six years, she begins to wonder about her past as she experiences flashbacks to mysteriously forgotten memories.

After a bit of worldbuilding, exposition and plot development, Danvers teams up on Earth with pre-eyepatch Nick Fury, a key member of the covert international peacekeeping organization, Agents of S.H.I.E.L.D. They are tasked with locating the core of an experimental engine created by Dr. Wendy Lawson, a figure Danvers recognizes from her flashbacks.

The second and third acts feature on-brand action sequences, passable character development and plenty of crowd-pleasing easter eggs and callbacks. “Captain Marvel” predates all other MCU films and, with mid- and post-credit scenes to boot, sets the stage for the much-anticipated “Avengers: Endgame.”

“Captain Marvel” is filled to the brim with engaging action sequences, bright and technically proficient visuals, and a reasonable amount of humor the audience has come to expect from Marvel. The editing and cinematography are consistently passable — action sequences never felt too jumpy and transitions featured a lot of well-executed establishing shots.

Larson owns her role as the title character and Samuel L. Jackson and Ben Mendelsohn also give standout performances. An overarching theme of marginalized people (the Skrull) trying to survive in someone else’s (the Kree) world is palpable and never feels too forced or on-the-nose. A larger theme is that of female power.

One standout quote from Danvers is when, after realizing she has been fighting the wrong fight with “one hand tied behind her back”, she says, “what happens when I’m finally set free?” After this moment in the third act, the full extent of her powers are finally realized.

Captain Marvel is often hailed as the most powerful superhero in the Marvel Cinematic Universe. However, James Woods and other disgruntled viewers will complain that she’s a “feminist Mary Sue” for some reason, even though she’s just as powerful as she was in her first comic book appearance in 1967.

“Captain Marvel” is not the greatest film ever made. It’s not the greatest Marvel film ever made. But it doesn’t have to be. Marvel Studios’ “Captain Marvel” is a fun, well-done superhero origin film. The plot’s formula is familiar but not predictable. It is a refreshing addition to the MCU, excellently setting the stage for the next Avengers installment.