Fine arts program at IUS can (and should) add photography focus 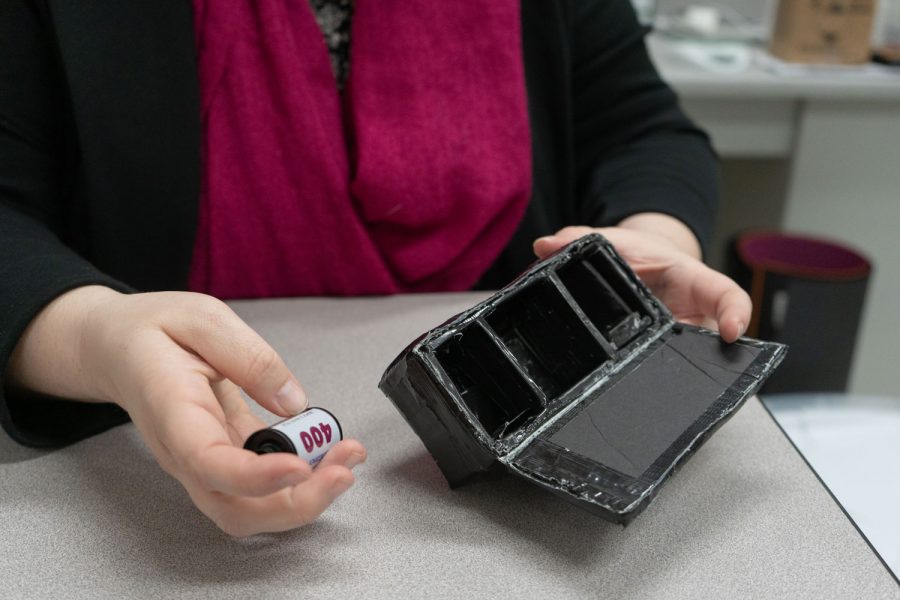 Amy Seibert holds out a roll of film and one of the makeshift pinhole cameras from camera club. The students used cardboard and duct tape to create their own film cameras and learn how to develop film.

I have been a photographer since high school. It always thrilled me to slow down during class field trips and take different pictures on my phone. When I started college at IU Southeast, I gained access to a real digital camera through school. I never put it down again.

Ever since then, I have used every opportunity to go out, take pictures and learn more about my newfound passion. I took any chance to go out and take pictures or learn from my friends about how to get better at photography.

Last semester, I took one of the only two photography class offered at IU Southeast. Both Ivy Tech and University of Louisville offer concentrations in photography as part of their fine arts programs, so why doesn’t IU Southeast?
Why We Need Photography at IUS
Photography is the base for many forms of art. It helps students understand compositing for not only still images but film as well. Without offering it as a degree path for our fine arts department, students do not have the courses they need to grow in these areas.

“Creating the digital art concentration with the absence of the photography area is really challenging. All of these… image-based practices are really intricately connected,” said Tiffany Carbonneau, associate professor of fine arts.

Students themselves see the importance of having more photography classes on campus. More students are recognizing the benefits of photography in other fine arts programs as well.

Paris Brock is a fine arts junior, and said she has some qualms about the lack of photography courses — and resources — at IU Southeast.

According to Brock, many students that transfer from Ivy Tech are disappointed in the lack of photography resources. The studio at IUS is much smaller and not as well developed as the studio at Ivy Tech. It makes it more difficult for students to expand their horizons in the realm of photography.

“There’s a graphic design course that I’m currently taking… where she’s teaching us how to photograph products, which we don’t really have a studio space big enough for that… So a lot of the photography falls on other teachers. In printmaking we learn how to photograph our prints and things like that… There should be a course that goes over that and I think it would be beneficial in general,” Brock said.
Making Progress
IU Southeast has already made a few steps forward toward getting a photography concentration in its fine arts program. It added a second, more in-depth photography class in the spring of 2018.

Amy Seibert, an adjunct professor at IU Southeast, teaches both “Photography” and “Advanced Photography I.” The popularity of her first class has allowed her to recently add the second course.

“It’s gained a little bit of momentum. It’s only the second time but we have a full class now. Last semester was only like ten students,” said Seibert.

Seibert also started a camera club last semester, encouraging students to gather and experiment with their photography. They focused on creating pinhole cameras out of cardboard and duct tape to experiment different ways of shooting and developing rolls of film.

Currently, the camera club has been stalled due to a lack of students.

“It’s currently on a bit of a hiatus because all of the camera club members are in Photo 2 so Photo 2 has turned into camera club,” Seibert said.

Seibert plans on starting the club up again next semester with the goal of making it a recognized group on campus in which any prospective student can participate.


Road Blocks
There are still a couple of steps needed to get a photography concentration on campus.

More photography courses need to be added to the IUS fine arts program and to do that, there has to be another course existing on one of the other IU campuses. Then, Carbonneau can request that the course be taught at IUS.

“Basically I just have to prove that what’s being taught in that course is meeting the standards of what the course was intentionally designed to teach,” Carbonneau said.

Along with more courses, there needs to be a faculty member to teach those extra classes. Carbonneau and the other fine arts professors have other classes they teach, and do not have enough staff to add more courses.

Additionally, a light room has to be established on campus. It does not have to be as large as other schools in the area with multiple workstations, but learning how to shoot and develop film is still an important part of photography education.

“We really need to have a dark room, and even though… a lot of photography programs at universities are moving away from the dark room, it still remains a… fundamental and foundational experience that students who graduate with degrees in photography need to have,” Carbonneau said.

Although there is no photography concentration at IU Southeast, the support from students and faculty alike over the past few years are breathing new life into the once nonexistent program.