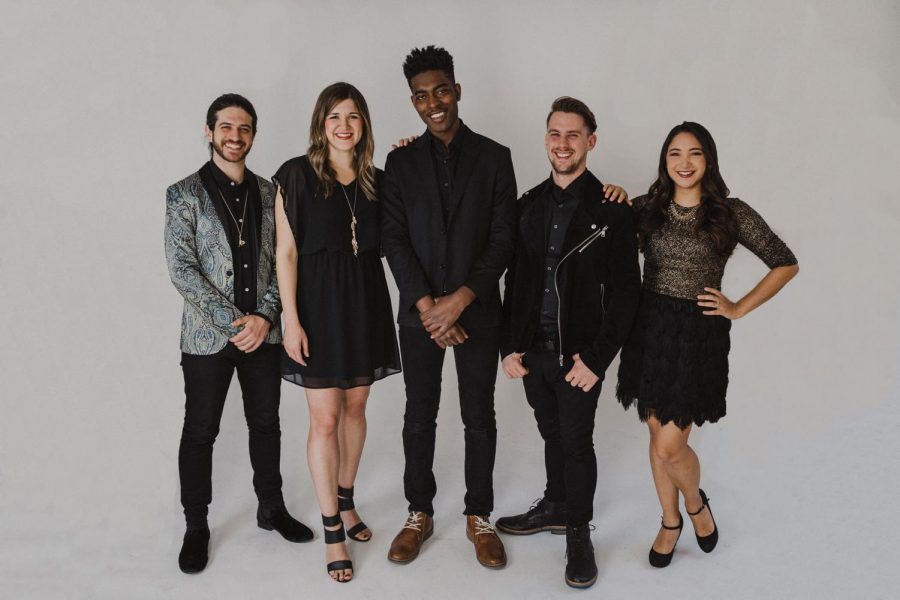 Backtrack, an award-winning acapella group based in New York City, visited the Ogle Center on their Midwestern tour. They cover a variety of genres, from pop to Motown to classical, as well as original compositions.

The group started out with a popular song choice of “No Tears Left to Cry” by Ariana Grande. It was a great opener with a song that is fairly new and widely known. From the start, it gives the audience a sense of involvement and catches their attention with something they are familiar with.

As far as the quality of the song, every vocal part had a great piece of involvement. It used the bass in a smart way and even took a song that is originally a female solo and transformed it from the female solo part into a male/female duet and then into an ensemble.

In their next song they did the classic “I Want You Back” by the Jackson 5. I thought going from a new pop song, to an older classic was a smart choice. It broadens the audience range, so those that may not be as familiar with newer pop songs have something they know. This trend continued throughout the show: the group balancing newer songs and classics.

Between each song, they talked a bit about the group. In the middle of this song however, they introduced themselves. The group consists of a bass, beat boxer, alto, soprano and tenor.

A common trend throughout the show that made the group stand out was the balance they had. They picked smart, intentional moments to utilize riffs and when they did riff, it was not too much or overpowering to the group or song.

The bass highlighted the other vocal parts well. He meshed well with the group which was vital with this vocal part. While his voice was not always as noticeable in the group, his part propelled each song.

You could really see this once they demonstrated how they add parts in. Each part was isolated and built upon to show how they form as a group. To demonstrate this, they sang the song “Stand By Me.” The song built beautifully with each part and grew into an angelic chorus.

Once they performed that, they showed how they make variation. I found this so intriguing because they took the same song and transformed it by simply changing the beat boxer and bass, and switching up tempos.

They did a fast-paced version of “Stand by Me” which was very different for that song. Even more different, they switched it up to an electronic variation. Afterwards, they removed the beat boxer and the rhythm and did a slow, haunting version.

The group knows how to build incredibly well, whether its building on parts, building in harmony, or building the climax of the song, they know how to start with a solid foundation and then build high to the point of chills.

They know how to add suspense and intensify songs.

That was especially heard in their next song “Stay.” I didn’t even recognize the song until the chorus, which I liked. This made the song seem original and then as soon as the chorus dropped, it gives the audience the sense of ‘Oh, I know that!’

They performed a mashup of popular songs and then moved to one of the crowd’s favorites. The group’s award-winning beatboxer performed a solo piece.

I could not wrap my head around how he could make so many sounds at once. This man was singing, beatboxing and adding sound effects all at once. The sounds were so intricate and yet melded together seamlessly.

He had a great variation of sounds while also changing the melody to keep things fresh. He changed the tempo to something fast-paced and I sat there trying to figure out when this man could possibly have the time to take a breath.

The best part about the group’s beatboxer besides his insane vocal talent, was that he was comical. It kept the show entertaining and fresh while also making the audience feel more involved by laughing along.

Each group member had their own talent that added to the group. Their alto had an effortless belting voice. Their tenor knew how to riff and knew when to riff. Their soprano hit high notes without overpowering, but could also handle lower parts as beautifully as she could the higher notes. Their bass and beatboxer tied everything in.

It took a while for their bass to have a real solo part. He finally did towards the middle of the show when they sang “This is Me” from The Greatest Showman. The beatboxer made this powerful ballad more of an up-tempo piece but still kept the powerful integrity the original song has.

Throughout the entire show, the groups harmonies were spotless. They knew what parts and what precise harmonies would make each song shine and it showed in every song they performed.

The group also performed two original songs. I felt this was a risky move considering this can make the audience disconnect. However, both songs were fairly catchy and I thought it was great that both songs had lyrics with positive messages about life.

I felt the weakest point of the show was some of the movements. There were certain songs you could tell the group loved because the physical movements were intentional and energetic; however, in other songs they felt forced and were not always clean.

Probably my favorite part of the show was when they brought an audience member up and performed a whole song about him on the spot. They made the bit similar to a dating show.

The comical bit was called “E-Flat Harmony.” They created great lyrics that perfectly matched how the audience member described himself. It was clever, funny, and by the end I wanted more. Unfortunately, this was the only time they did this.

I have seen bits when groups make up their songs and they are always cool, but I thought this bit was even better because it was so focused on making it like a dating show. They added a theme song for the bit and the beatboxer built on the lyrics being sung. There was a point when the lyric “trumpet” came up and the beatboxer made a trumpet noise. It was the little details like that that made the bit all the more captivating.

Towards the end, the group said they were “bringing the funk” and they did. They performed a medley of funk songs. The group’s rhythm, range and riffs shined bright in this number, and they had the audience clapping and dancing along.

The one-hour show ended with their last song “No” by Meghan Trainor. The group performed a another comical bit and it made me wish they had more of that throughout.

The group brought it in this number. They had great tempo, beautiful harmonies, climactic builds and good choreography. I realized I wanted more of this and wished there would have been more of this vibe throughout the entire show. It was obvious they loved performing it and they were feeling the groove of the song.

They tied the performance up with some insane harmonies and riffs and finished it with a comical piece. I loved this number and wished every number would have been at this energy and performance level.

Overall, I felt the group did a great job. I definitely want to check them out after listening to this show. There were some small things that could have been improved, but this group’s talent is enough incentive to check them out.

You can find them on social media, Spotify and other music streaming services.