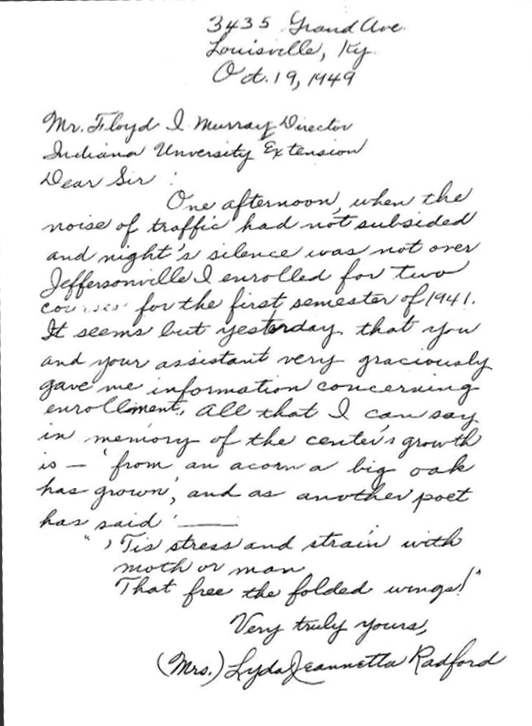 Correspondence sent from Lyda Radford to Floyd McMurray, founder of the Falls City Area Center, confirming she was the first student enrolled at what would become IU Southeast.

Over 68 years ago, Lyda Radford was denied access to schools in her residing state, leading to her travel across the river to gain a higher education and pursue her passion.

“It is important to remember Ms. Lyda Radford because the documented story about her as the first student at IU Southeast celebrates and recognizes the past, present, and future of IU Southeast,” said Faye Camahalan, dean of the school of education.

In 1941, Radford moved from Kentucky to Indiana to take graduate classes in education. Before the IU Southeast campus moved to New Albany, it was located in Jeffersonville, and was called the Falls City Area Center.

“Lyda was an educator in Kentucky, but Kentucky law at that time [1941] did not allow people of her race to have graduate degrees so because of this regional institution IU had in Jeffersonville, she was able to come across the river and get her graduate credentials,” said Betty Russo, vice chancellor of advancement.

A marker is set to be dedicated to Lyda Radford on the IUS campus after an application was sent to the IU Historical Marker Program. The marker should be placed sometime in the fall of 2019 or spring of 2020.

“[The IU Bicentennial] is a great way to celebrate such a milestone in the university’s history, and in Indiana’s history as well.” said Russo.

This ceremony will be dedicated to the founding of Indiana University in 1820, but also celebrating the placement of the historical marker commemorating Lyda Radford.

“She was our first student ever enrolled in what we now call IU Southeast and I think what’s more impressive is you think of 1941, she was a woman, she was an African American woman and that makes it very significant and a reason for us to celebrate,” Russo said.

Celebrating Lyda Radford shows IU’s diversity. In 1941 she was not able to gain her graduate degree due to the restrictive laws in Kentucky. Despite this she found a way to achieve her goals though IU.

After gaining her graduate credentials, Lyda Radford continued teaching for several years, thanks to the education program available to her though IU. Lyda was the first in a set of shoes many would stand in after her on this campus.

“Like Ms. Lyda Radford, the future belongs to those with passion, reason, and courage to make a difference. Education, as a field of study, offers a powerful tool for change, improvement, and growth in each of us,” Camahalan said.

In a letter between Lyda Radford and Floyd McMurray, founder of the Falls City Area Center, McMurray stated to Lyda that she was believed to be the first student at the center in Jeffersonville, Ind. in 1941.

Lyda responded in another letter with the quote “from an acorn a big oak has grown.” This quote referred to the growth of the campus.

“I think celebrations like this and what Lyda Radford brings to mind for me is the importance of a regional campus, we are part of a well-known flagship university,” Russo said.

McMurray valued education and its importance for the residents in southern Indiana. He knew the community could use this institution because people from Kentucky would come across the river for education as well.

“It documents the legacy of a student that everyone who reads the conversation between McMurray and Radford will certainly go back in time and appreciate the humble beginning of IU Southeast,” Camahalan said.