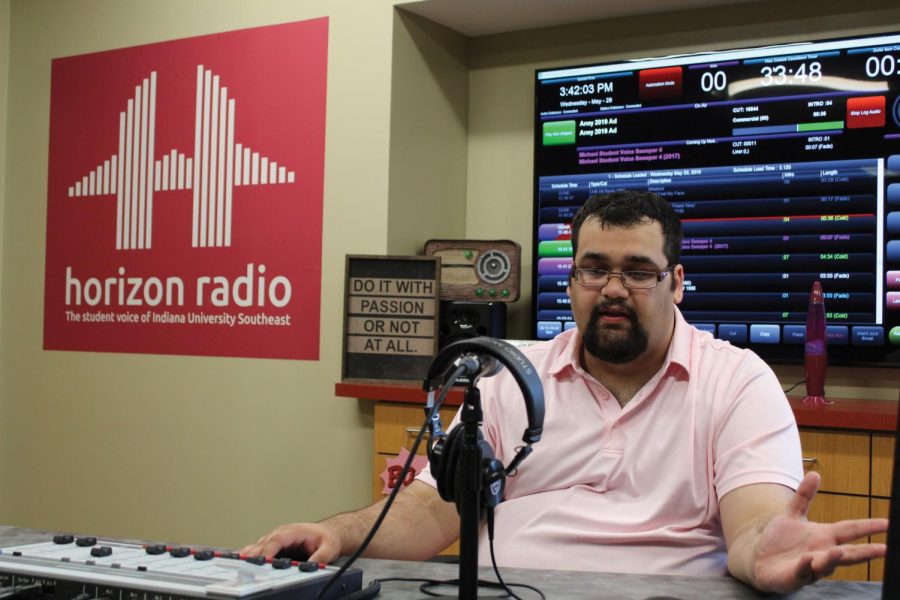 Station Manager Matt McClellan mans the sound board inside Horizon Radio’s broadcast room. McClellan has led the station for three semesters. “I enjoy hearing stories and talking to people and hearing what they have to say or play,” he said.

As students wander the halls of University Center South, sounds of American Football’s “Never Meant” may emanate from a peculiar room with a glowing red “on-air” sign. Inside, there is a strong possibility one may find Matt McClellan, senior traditional communications major and station manager of Horizon Radio.

Horizon Radio is IU Southeast’s student-produced Internet radio station, founded in January 2018. McClellan has served as station manager since its launch.
Leadership
Leadership comes naturally to McClellan, a skill he attributed to his religious upbringing. He recalled managing his school’s choir while on a trip to northern Louisiana, coordinating snacks and giving classmates various direction and advice.

A personable demeanor and proclivity for empathy are important leadership qualities for McClellan, and he said he applies them both when working with his staff.

“The way you treat people, regardless of your position, says a lot about you,” he said.

John Renfrow, multimedia journalism senior and Horizon Radio’s assistant station manager, co-hosted a sports talk program with McClellan in the spring of 2019. He described McClellan as a walking encyclopedia who leads by example.

“He’s always approachable and eager to help anyone who needs it,” Renfrow said.
It’s Always Been Audio
McClellan has been interested in radio ever since he was a kid, recalling fond memories of listening to Wolfman Jack and Tom “Big Daddy” Donahue broadcasts with his father.

“I thought they were the coolest people on earth just because they got to play records all day,” he said. “Disc jockeys were the unsung heroes of the time.”

McClellan said his family members enabled his love for radio, whether it was hearing classics for the first time with his father or listening to his grandmother’s old 78 records (vinyl records designed to be played at or around 78 revolutions per minute.)

“I still remember the first time I heard some things, because it just touches you in the core of your being and you’re like, ‘this is really damn cool,’” McClellan said.
Success in the Modern Age
Horizon Radio streams online 24/7 through both its website and the TuneIn app. In the age of easily accessible digital streaming through apps like Spotify, Pandora and Apple Music, McClellan said it is significant that people still tune in to radio broadcasts.

“You have [all these] people willing to take time out of their day, log in to the TuneIn app [and] forsake Spotify to hear weird music they may never hear anywhere else because they like you as a disc jockey,” McClellan said.

McClellan says Horizon Radio’s listenership is impressive. Every student-hosted show has at least 15 listeners each show.

Horizon Radio features music from all genres, as well as podcast-style programming. Its shows discuss topics including literature, international politics and dinosaurs.

Let’s Talk Dinosaurs! is an award-winning podcast hosted by Billy Reed. Reed graduated in the spring of 2019 and the show’s final episode aired April 25, 2019.

The show cornered a niche market, according to McClellan, and Reed’s passion for the subject carried the show.

“The combination of having a good host and an interesting topic made it work really well,” he said.
Getting On the Ones and Twos
Any student with any interest is welcome to join Horizon Radio, McClellan said. He said being involved at the station is a chance to meet interesting people, pursue one’s passions and gain valuable experience.

“You meet so many cool people with so many cool passions that you want to get to know them like a family,” McClellan said. “And some day maybe we’ll have a big family reunion.”

Horizon Radio boasted a 50-person staff in the spring semester, and McClellan looks forward to similar engagement in the fall. Getting involved is as easy as sending an email or walking in the door.

“Our automatically-locked door is always open. You can try to walk through the glass but I wouldn’t recommend it,” McClellan said.