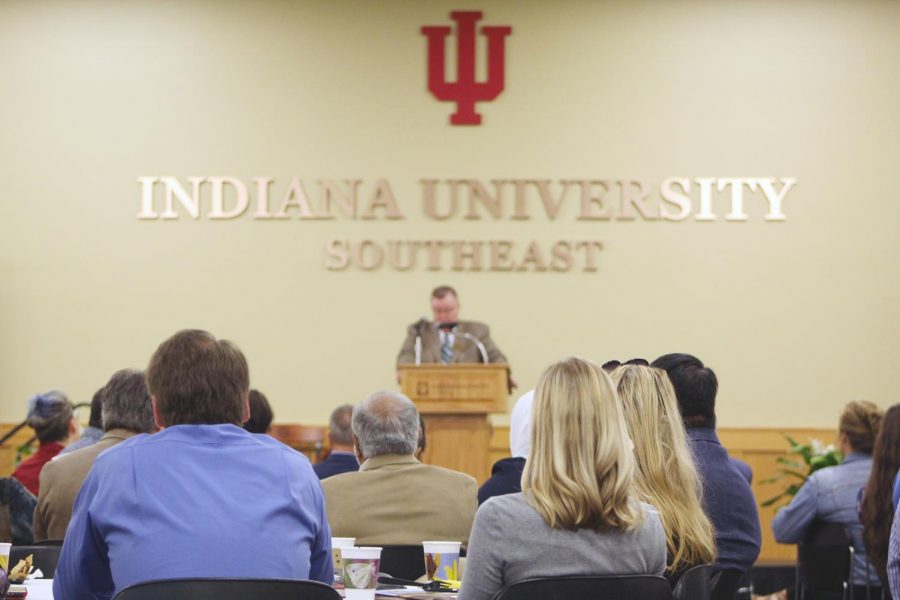 In his speech, Wallace reflected on his first five years as IUS chancellor, discussed the campus’ declining student population, and emphasized the event’s most-used buzzword: retention.

“As we look ahead to the next five years, retention must be our core mission,” Wallace said. “Retention is everyone’s job, and everyone will be expected to help.”

“Over the last five years, we have maintained a balanced budget despite a 12 percent decline in credit hours from 2014 to 2019,” Wallace said.

The chancellor spent most of the speech addressing the largest concern at IU Southeast — declining headcount and credit hour enrollment.

A Student Body in Decline

Enrollment at IU Southeast has been steadily declining since its peak in 2011.

IU Southeast’s enrollment rate is currently the lowest it has been since 1999. The steady decline in credit hour enrollment has been felt in colleges and universities across the nation, but Wallace expressed surprise at the rapidity of the decline in recent years.

“We were all taken by surprise,” he said. “We’re a good school, it’s just we’re caught in a cycle of enrollment decline.”

The enrollment decline is not predicted to stop any time soon. Wallace discussed an impending “enrollment cliff” on the horizon — a sharp decrease in fertility after the 2008 recession leading to low high school enrollment and graduation rates around 2026.

“I’m sharing this information with you not to cause panic, but to encourage the entire campus community to rally together in a spirit of enthusiasm to embrace our new reality,” Wallace said.

While Wallace said the administration is making incremental improvements to stave off the enrollment decline, he stressed one challenge that every member of the faculty and administration can help overcome — retention.

“This is hard work,” he said. “Retention will only come in small increments. However, every point, or every tenth of a point, is meaningful, and behind these points, are real students, real people, real families, real dreams and aspirations being realized.”

At the end of his speech, Wallace announced the formation of the Crimson-Ribbon Panel on Retention Improvement. Consisting of a select group of students, faculty, staff and administrators, the panel will be tasked with developing and advancing actions to improve student retention as soon as 2020.

“We need to consider the types of changes needed to ensure more students persist and so our challenge is to create a more engaged environment in which our students can persist,” Wallace said.

Vice Chancellor for Administrative Affairs and Chief of Staff to the Chancellor Dana Wavle said after the event he thinks the university is doing what it should to prepare itself for the future.

“I think [Chancellor Wallace] offered a roadmap that can help the campus deal with demographic trends that are on the horizon, and it really does come down to retention,” Wavle said. “He offered a compelling, singular vision for the campus.”

According to Wavle, IU Southeast is still attracting new students to the campus, but he says the university needs to focus more on ensuring students remain enrolled in classes and graduate.

“I think our big challenge is keeping them first year to second year,” Wavle said. “Our admissions team is doing a great job of bringing students here. That’s not to say it won’t get more challenging. It will. But I think as far as bringing students in, we’re happy where we’re at today.”

In his speech, Wallace cited a current persistence rate of 60 percent. That rate, he said, needs to increase to 80 percent within the next 10 years if the university is to overcome the enrollment decline.

Executive Vice Chancellor Uric Dufrene awarded the 2019 Distinguished Teaching and Service Award recipients with plaques recognizing their above-average contributions to the university, the community, and to their academic fields.

The recipients of each award were:

Faculty Innovator of the Year Award

“I’m so excited,” Mildred Vernia, recipient of the Distinguished Full-Time Teaching Award, said. “I wish I could have thanked everybody here because I think all the people here have been the community who have helped me grow into this point in my career. [I want to thank] not just faculty, but staff. Everybody – secretaries, janitors, and everyone who has helped me do my job.”

Faculty at IU Southeast, she said, have always helped her achieve her goals.

Director of the Ogle Center and recipient of the Distinguished Professional and Technical Service Award Kirk Randolph attributed his success to his mentors and loved ones.

“This is years of many wonderful people mentoring me – an incredible team working at the Ogle Center and all across the university, and wonderful parents,” he said.

The event concluded with the recognition of faculty and staff who are either new to the school this year or newly retired.

All IUS vice chancellors went onstage to welcome these new faculty members to the university:

And at the end, administrators recognized and bid farewell to these newly retired faculty and staff:

A full copy of Chancellor Wallace’s State of the Campus Address can be found at: www.ius.edu/chancellor/presentations-speeches/state-of-campus.php