A community rooted in tradition 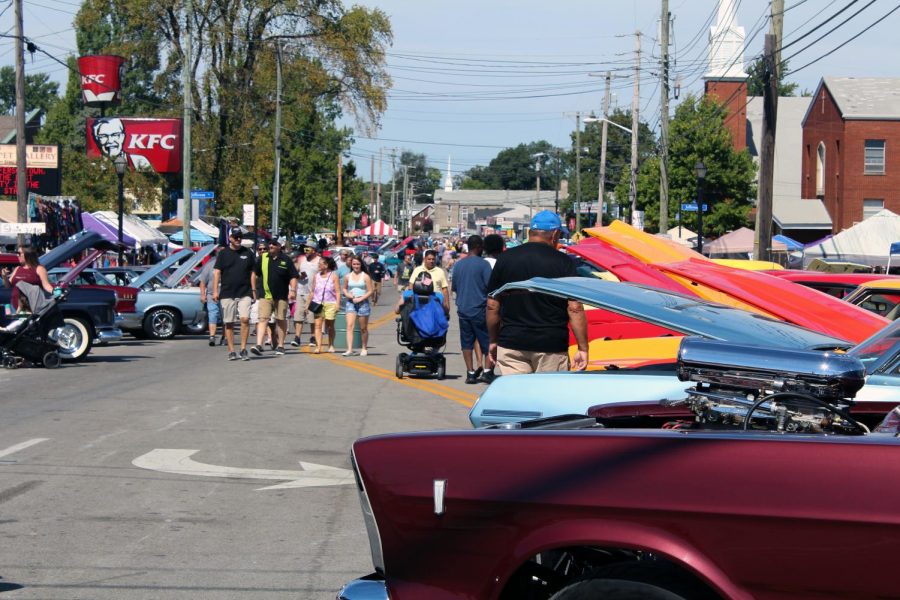 Among the events happening on Sunday was a car show on Taylorsville Road, showcasing local, classic and custom cars.

A tradition began in the heart of Jeffersontown in 1969 that has been going strong for 50 years. This year’s Gaslight Festival was held September 13-15, when the city of Jeffersontown and those surrounding came out to celebrate the individuals that call Kentuckiana home.

Gaslight is an eight-day extravaganza hosted by the chamber of Jeffersontown. Events include a balloon glow, 5K race, car show, parade and festival. Each year, the community comes together to make this happen on the third weekend in September.

The annual festival topped off a week of Gaslight events with plenty to see and do through Sunday night. The businesses who made up the lines of booths stretching across Watterson Trail were the highlight of the festival. From nonprofits to small businesses, nearly every part of Louisville was represented in its own way. The festival could not have happened without those who chose to become involved.
Supporting Small Businesses
Sergeant J. Marble was working for the festival and had one word to sum up the festival experience: tradition. This is something deeply rooted in what began 50 years ago.
“It’s always nice to see the same people come out. It’s like a family event.” – Sergeant J. Marble
While the festival is an event for families to celebrate local tradition, for some it means much more.

Prep Meals 502 becoming a vendor at Gaslight this year was a big accomplishment. Mattingly said their goal was to showcase how they can make mealtime easier for anyone. Many do not even realize their options for quick meals are here locally and made from local produce.

Prep Meals 502 brought a lot to the festival but had one goal in mind — to give others an opportunity for a healthier mealtime.

“We truly are here to help people eat healthier to have easy meals that they can fix at home that we have done all the hard work with.”

Showing up and making a connection is key for these local businesses — Marble said it is how they grow. Supporting these local

organizations puts emphasis on community, and he said that is something that large businesses do not have. Knowing and publicizing local places within Kentuckiana helps them become stronger.

“The more smaller businesses there are and the more people that know about them, they’re gonna spend money in your community and the money stays in your community,” Marble said. “You’re helping your fellow neighbors.”
Working Together for The Common Good
A local nonprofit fighting animal cruelty, The Arrow Fund, also attended the festival this weekend. Pushing to make its cause known, the nonprofit sold local treats made from Purrfect Pet Bakery and t-shirts with the organization’s logo on the front. All of the proceeds were put back into its fight for animals and their well-being.

Josh Arnold, volunteer and representative for The Arrow Fund, discussed the community aspect of its goal.

“It brings a lot of people together because we are focused on one thing and everyone interested in that one thing then comes together in support,” Arnold said.

He then reflected on his recent trip to Frankfort with The Arrow Fund to work to change laws in place. The Arrow Fund’s goal at the festival is to show what the nonprofit is doing in the community today.

The efforts made by a community to work together in support of one another often take flight at the nonprofit level. These same values are shown through the Gaslight festival year after year. For one week in September, the Jeffersontown works together to show nothing but support for one another.