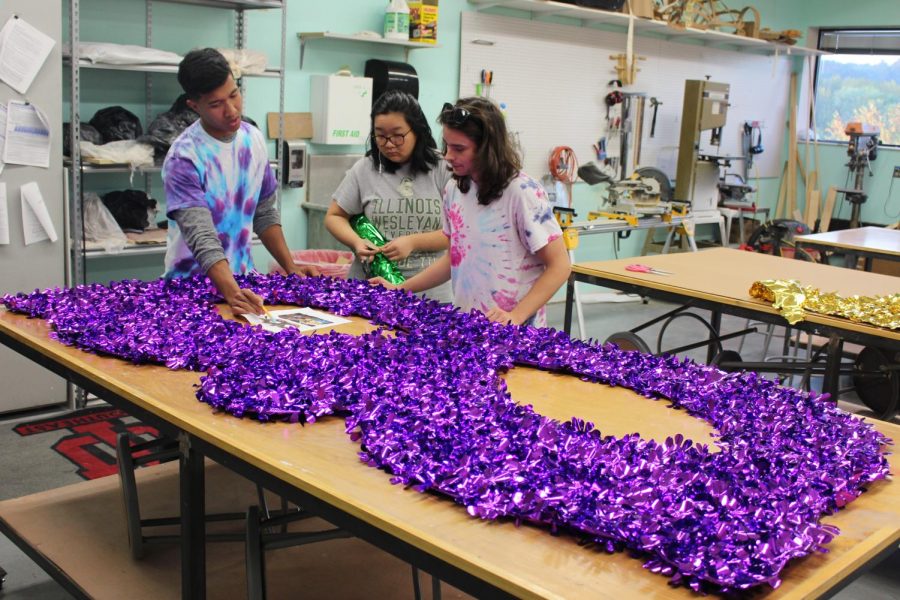 Tor Chaleunphonh, sophomore graphic design major, explains his idea for the mask to his classmates.

The bead-throwing of Mardi Gras combined with the candy-giving of Halloween on Saturday, Oct. 5, for IU Southeast’s Mardi Gras and Halloween-inspired floats at this year’s Harvest Homecoming Parade and Float Show. There were two IU Southeast floats, one created by the Fine Arts department and another by the Theater department.

IU Southeast’s Harvest Homecoming floats were awarded first place in both the Commercial and Float Theme categories this year, after having won first place the previous year.

This year’s theme, “Carni-Fall,” was a combination of the famous carnival Mardi Gras and the fall season. The parade began at 3:00 p.m. at New Albany High School and concluded at 5:00 p.m. when it reached Bank Street.

The Fine Arts department’s float creation was led by Donna Stallard, senior lecturer of Fine Arts at IU Southeast. This was her third year creating a float.

The float included Gus the Grenadier, the IU Southeast mascot, wearing a masquerade mask, a giant jester and the IU trident.

The process began in mid-August, when the Harvest Homecoming Committee presented the float builders with the theme.

Stallard said she typically allows her students to work on the float for two or three weeks because she can not spare more class time than that. This year, she said they got an even later start than usual.

“We had to wait because I didn’t even know where our stuff from last year was stored,” Stallard said. “We went a whole weekend where we could not work because we did not know where the petal paper was actually stored.”
Student Help and Leadership
Stallard’s students, a group that included Tor Chaleunphonh, a sophomore graphic design major, and Jude Martinez, also a sophomore graphic design major, helped her through the building process. Martinez became the de facto student leader of the project, a position in which he said he is comfortable.

“I really enjoy big projects but I also hate doing them alone,” Martinez said. “Working with people and working in a group, it’s just my environment.”

Though Martinez took the head student role in the class, he gave substantial credit to the help of Chaleunphonh as well.

“Tor is one of those guys that brings everybody up,” Martinez said. “He makes the magic happen. I can direct people and I can tell them what to do, but Tor is there to keep the momentum and camaraderie going.”

Both Martinez and Chaleunphonh were proud of their work, but they were quick to mention that none of this could have happened without Stallard.

“She tells us what needs to be done and then we do it,” Martinez said. “There is no babying at all.”

Stallard hopes for student help and engagement but never requires it for this project. She was thrilled with the amount of volunteers that stepped up to the task.

“[During] the Monday and Wednesday evening class, I was like, ‘you guys, I need help,’’’ Stallard said. “They turned it into a party. Over half the class was here working on something.”

Stallard also thanked specific students that helped out by name.

“Shelby Pennington has been a huge help,” Stallard said. “Jude, Tor, Griffin. Those guys stepped up big time as well.”

The Judging Process and Aftermath
There are several rules regarding the float-making process, such as not being able to arrive to the parade before a certain time and making sure you are in your designated slot. The actual judging of the floats, according to Stallard, is far more casual.

“[The judging process] is kind of casual,” Stallard said. “All the floats are in a numbered bay on the street and there are people on both sides.”

As far as the criteria goes, Stallard is unaware of how they actually judge.

“I do not know what the criteria is,” she said. “I do not know if we have ever been given a rubric. I know there are categories. I know last year, we were entered in three and I think we walked out with four or five awards, one that we did not even know we had applied for.”

After the judging and award process, the floats are free to the creators. Stallard said that after weeks of work, the float gets taken apart in about 45 minutes.

After the event is over, they try to recycle as much of the material as possible.

“I equate it to… athletes who train for the Olympics,” Stallard said. “They spend their entire lifetime working toward that one goal and in most cases, they have less than three minutes to do their performance, and if it happens to be an off day, that is their one shot.”

“We’re on show for like three hours and then everything comes back over here and everyone gets together Monday afternoon and disassembles it.”
Valuable Experience
Stallard does not require any of her students participate in the building of the float, but she makes it clear that experiences like this can be valuable to the students, both in their academic and professional careers.

“I told them that it is important for students as they work toward graduation that they start to build community service hours because a lot of employers want or expect that,” Stallard said. “This is a way that they can do that without a whole lot of extracurricular time because they are doing it during their class time.”

Chaleunphonh said while he does love art, the resume-building aspect of the project played a role in his participation as well.

“The thing that perked it up was actually… when I heard that we could use this on our resume,” Chaleunphonh said. “Right now is a time where you build up that portfolio you have as an art student because that is what jobs look to.”

“Yeah, you got the degree, but what kind of activities were you a part of and participating in?”

Stallard sees the entire experience as positive and rewarding.

“[It is rewarding], especially when students realize that their work is well-received by the community,” Stallard said. “And the little kids, I remember going to this event as a child because I grew up here, the little simple things mean the world to them.”

“Usually the university allows us to pass out candy, and this year it will beads. The little kids are so excited”

Stallard was also thrilled with the turnout from students to admire their hard work.

“Last year, IUS took up almost an entire block walking we had so many students show up,” she said. “The fraternities and sororities are doing, I guess, some kind of competition amongst themselves… for whoever gets the most participants to show up.”

“You can see the pride within the school.”