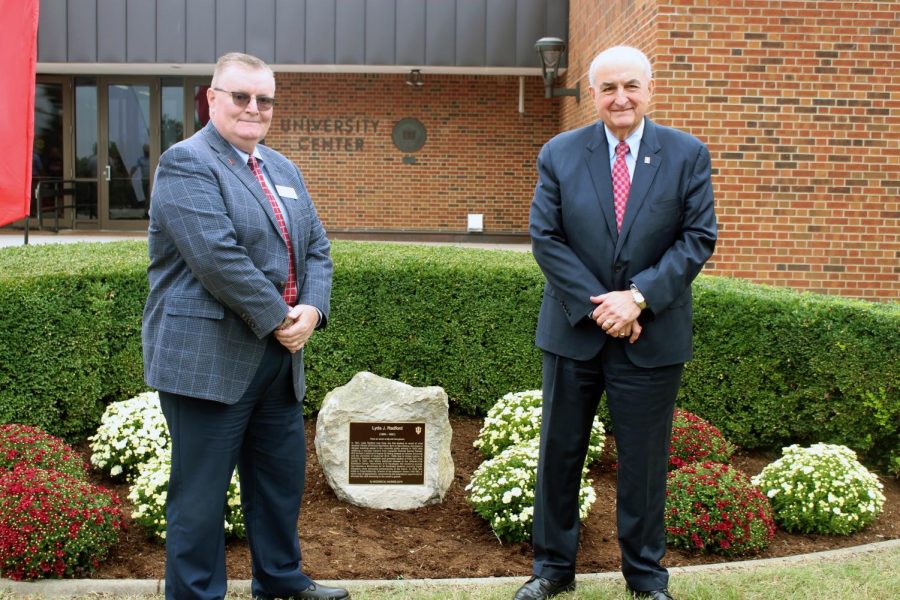 IU President Michael McRobbie unveiled a historical marker on Wednesday, Oct. 9 commemorating Lyda Radford, the first student to ever enroll at IU Southeast. The marker is on display right outside the entrance to University Center North.

“I’m pleased to be here today to unveil the first historical marker on this campus and delighted to see such a large crowd of people,” McRobbie said.

This marker is part of the IU Bicentennial which is being celebrated across all IU campuses this year. Along with Radford’s marker, there have been 43 others approved for installation in honor of the celebration.
Who Is Lyda Radford?
Lyda Radford was denied access to schools in her residing state, leading to her travel across the river to gain a higher education and pursue her passion.

“Lyda was an educator in Kentucky, but Kentucky law at that time [1941] did not allow people of her race to have graduate degrees so because of this regional institution IU had in Jeffersonville, she was able to come across the river and get her graduate credentials,” said Betty Russo, vice chancellor of advancement.

Radford moved to southern Indiana to take graduate classes in education at the Falls City Area Center in Jeffersonville. This institution would eventually be moved to New Albany and knows as IU Southeast.

“She was our first student ever enrolled in what we now call IU Southeast and I think what’s more impressive is you think of 1941, she was a woman, she was an African American woman and that makes it very significant and a reason for us to celebrate,” Russo said.

Chancellor Ray Wallace attended and spoke at the event, presenting a commemorative speech on Lyda Radford with assistance from McRobbie.

“I’m very excited to have this lovely marker here,” Wallace said. “It shows the history of this institution in a very succinct but a very emotive way.”

“I appreciate the fact that the very first education major was a woman of color, especially given the time period,” said elementary education major, junior Ashley Zink. “I think Lyda Radford’s story should be told to all new education majors when they enter the program so they can learn more about … its origins.”