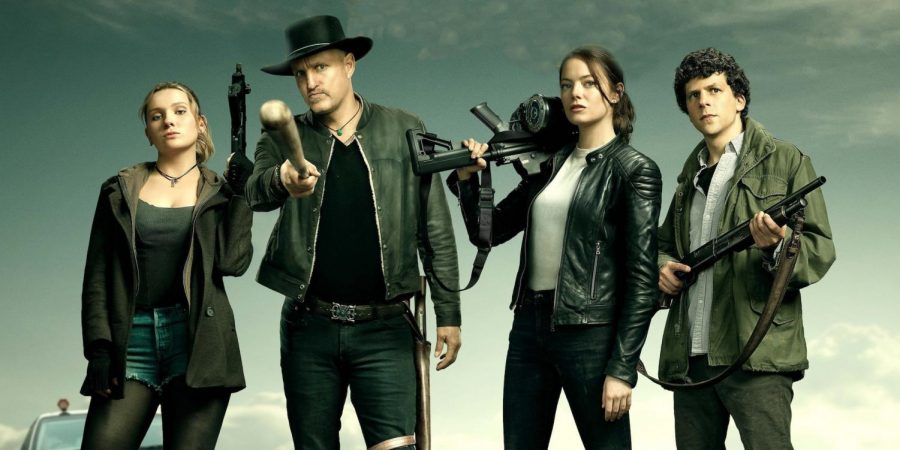 Full of self-awareness and gruesome-yet-satisfying zombie kills, 2019’s “Zombieland: Double Tap” is a solid film that recaptures the charm of its predecessor.

A decade after 2009’s hit horror-comedy “Zombieland” earned over $100 million box office worldwide on a budget of $23 million, director Ruben Fleischer’s sequel saw a wide release on Oct. 18, 2019, just in time for Halloween.

“Double Tap” opens with voiceover exposition, delivered by Eisenberg, feeding the audience information about the world’s developments over the past ten years. We learn of new developments with the group, including their recent coup in the White House. We are also introduced to the world’s new breeds of zombies: Homers, Hawkings and T-800s.

The original cast maintains the chemistry it established in the original, with significant plot lines developing the relationship between Columbus and Wichita, as well as Tallahassee and Little Rock.

The cast’s R-rated banter contribute to most of the film’s excellent scenes. The original’s brand of humor established it as a cult classic comedy, and “Zombieland: Double Tap” does not miss a beat.

The film, although suffering from a few tropes and a thin plot, excels in every area one would expect: gory zombie kills, heartfelt family dynamics and satisfying character development.

In any sequel, callbacks and fanservice are expected. “Double Tap” features a handful of callbacks to iconic parts of the original. Columbus’ survival rules are expanded upon, and Tallahassee utters his famous catchphrase that is quickly mocked as outdated. Several other quips and bits of banter contribute to the film’s self-referential humor.

“Double Tap” takes a swipe at “The Walking Dead” early in the movie, and it lands well. Although, it is hard to ignore the cultural zeitgeist of zombies is seemingly on its way out.

One of the only negative aspects about “Double Tap” was its use of Zoey Deutch’s character. Deutch stars as Madison, and uses a dated “dumb blonde” trope that feels grating very quickly. Deutch’s performance is hilarious and endearing, but her character’s trope seems more suited to a film from early 2010.

Without potentially spoiling the plot, it is highly advised that viewers stay for a few minutes after the credits start rolling.

“Zombieland: Double Tap” is not a perfect film, but ultimately a satisfying sequel for fans of the original. It renews the charm and unique humor of its predecessor while giving its beloved characters—and their post-apocalyptic world—meaningful development.