“Joker” shocks critics and audiences with its twisted storyline 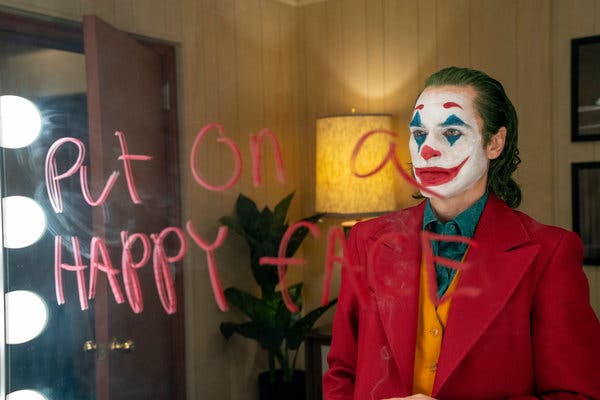 The Joker is considered to be one of the most infamous criminals in Gotham City. The villain is known for being psychotic and being the mastermind behind the murder of Batman’s parents.

The film is based on the DC Comics characters, and stars actor Joaquin Phoenix who plays the Joker. Released on Oct. 4, 2019, “Joker” is now the highest grossing R-rated film of all time.

Director Todd Phillips began working on the film in 2016 and wrote the script alongside Scott Silver throughout 2017. Fans of DC Comics did not have to wait long to see the masterpiece that Phillips produced.

The film is set in Gotham City in 1981. It follows the day-to-day life of Arthur Fleck, an aspiring comedian who struggles with a mental disorder that causes him to laugh at inappropriate times.

Arthur lives with his mother, Penny, in a one bedroom apartment and works as a party clown. After being jumped and beaten by a gang in Gotham City, a coworker gives Arthur a pistol.

While dancing and entertaining kids at a children’s hospital, the weapon falls from Arthur’s pant leg, causing him to be fired from his job.

On the subway ride home, still in his clown costume and makeup, Arthur is beaten by three Wayne Enterprises businessmen. He shoots two in self-defense and executes the third.

Soon after, Thomas Wayne, candidate for mayor, comments on the murders and says those who are less fortunate are “clowns” and envy the wealthy. This leads to division between the upper and lower class and protests broke out. Protesters wear clown masks that resemble Arthur’s makeup he wore when he murdered the three men.

After witnessing how popular he is growing in the news, Arthur’s mood changes. He becomes a confident, quirky, violent individual who isn’t afraid to dispose of those who make a mockery of him.

Without giving too much of the plot away, the film is a jaw-dropping experience with a gruesome plot. Joaquin Phoenix embodies the Joker with the laugh, strut and overall antics.

His downward spiral and metamorphosis into the Joker is captivating. Once his hair was dyed green, audience member’s knew the Joker had emerged and was ready to seek revenge.

Some critics and movie-goers might argue that the movie is too depressing and violent, but it shines a light on horrific tragedies that are happening in the world today. The movie depicts bullying, child abuse, violence, sex, etc. Arthur Fleck was abused as a child, lied to about his real identity by his mom, and was made fun of and severely beaten up by people in his community.

Even his idol, a talk show host named Murray, played by Robert DeNiro, degraded Arthur and his comedy act. Murray even went as far as inviting Arthur on his show to share some of his “embarrassing“ jokes and his stand-up routine.

The film focuses on the Joker, but not much detail was provided about the Wayne family. This was surprising because most of the DC comics and movies are about Batman trying to defeat the Joker. In this film, Bruce is a child and he is not bothered by Arthur.

“The Joker” spectacularly shows an oddball’s descent into madness and villainy, while also generating Oscar buzz for its lead actor Joaquin Phoenix.