“The Lighthouse” is a remarkable piece of modern cinema 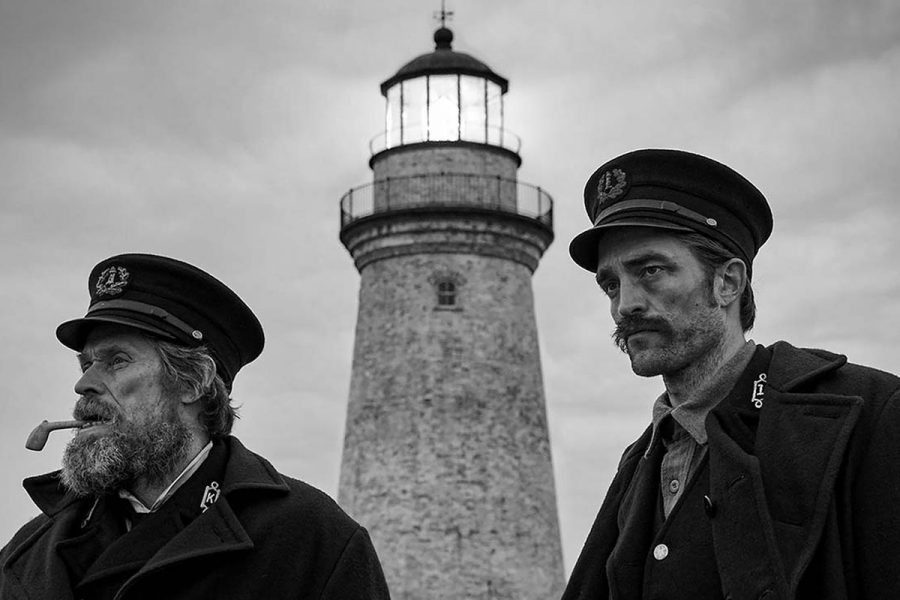 On a remote island off the coast of New England in the 1890s, two lighthouse keepers brave tough storms and tougher seagulls in 2019’s “The Lighthouse.” Packed with mounting tension, bleak humor and vivid cinematography, “The Lighthouse” is a must-see for fans of slow-burning horror.

The 110-minute film is directed by Robert Eggers, the visionary filmmaker behind 2016’s slow-burning “The Witch.” Robert Pattinson and Willem Dafoe star as leads Ephraim Winslow and Thomas Wake respectively.

Technical Choices
“The Lighthouse” was shot on black-and-white 35 millimeter film with a peculiar aspect ratio of 1.19:1. It was reported that Eggers used Panavision lenses from as early as 1912 for his shots. These stylistic directorial decisions give the film a striking resemblance to old silent films.

Paired with costumes and a meticulously detailed production design, Eggers used the 35 millimeter film to his advantage, evoking an atmosphere of the film’s time period, which helps further immerse the audience in the story.

The score and sound design of “The Lighthouse” are perfect: loud when needed, but subtle when the audience needs to focus on dialogue, of which there is plenty. Ambient sounds of crashing tides and squawking seagulls linger throughout the film.

The two men are initially hesitant to get along, but they end up confiding in one another in a series of expansive monologues. Pattinson and Dafoe, the only characters with any dialogue, engage in frequent expositional conversation during their four-week light house venture.

As both actors show off their period-accurate New Englander accents, some bits of conversation are quite difficult to understand toward the beginning of the film. Dafoe’s Thomas and Pattinson’s Ephraim are compelling, well-acted characters.

The actors give gripping performances as their characters deal with rising tensions, surreal hallucinations and coordinated descents into madness. The film having a total cast of around five people works extremely well, as it emphasizes the island’s desolate and remote nature.

Instead, Eggers utilizes tension, dread and unease to great effect. Right from the film’s opening shot, the audience is transported to early 19th century New England, adopting Pattinson’s point of view as the isolation and madness grow.

“The Lighthouse” certainly has no jump scares, but it does offer several visceral and unsettling moments. Although categorized as a horror film, it applies that label loosely. “The Lighthouse” is not one to shy away from comic relief, as viewers are introduced to fart jokes early in the film.

Fresh after the box office success of Ari Aster’s “Midsommar,” Robert Eggers’ “The Lighthouse” is one of the best films of the year. Aster and Eggers have expertly revitalized modern horror over the past three years.

“The Lighthouse” is an ambiguous art house film that leaves audiences yearning for concrete explanations. Those seeking a film that says, “this is what I am” may not have a good time. The film forces the audience to think and question what is happening.