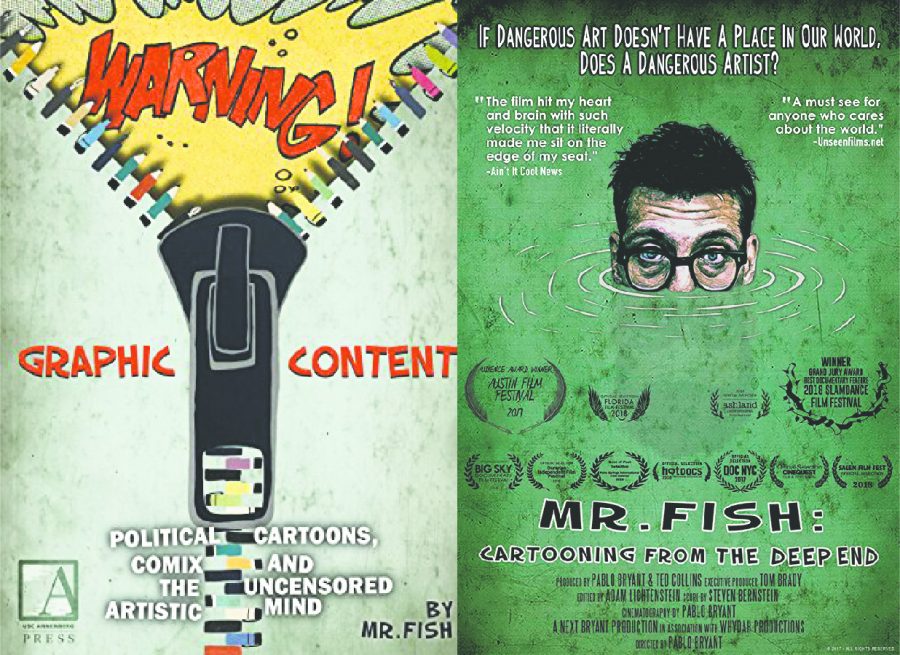 During his visit, Booth will lead two presentations about his work at the IQ-Wall on the top floor of the IUS Library. He will also appear as a guest on Jean Abshire and Cliff Staten’s Horizon Radio show, “The International Power Hour.”

“I love that we are bringing Dwayne Booth in,” Rosen said. “I think it will be an inspiring two days for the students.”

Known by his pen name “Mr. Fish,” Booth has worked as a cartoonist and writer for over 20 years. His cartoons have appeared in publications including the Los Angeles Times, Vanity Fair and the Atlantic.

Booth’s published written works — including “And Then The World Blew Up,” “Go Fish: How To Win Contempt and Influence People,” and “WARNING! Graphic Content: Political Cartoons, Comix and the Uncensored Artistic Mind” — are available through several online outlets including Amazon and Truthdig.
Itinerary
Tuesday, Nov. 19 | 7:30 – 9:15 p.m. : Booth hosts a screening and discussion of the documentary, “Mr. Fish: Cartooning From the Deep End,” of which he is the subject.

Wednesday, Nov. 20 | 7:30 – 9:15 p.m. : Booth leads a talk about the history and status of editorial cartooning based on his book, “Warning! Graphic Content: Political Cartoon, Comix and the Uncensored Artistic Mind.”

During his stay, Booth will meet with the staff of The Horizon during class to discuss the creation and commission of an editorial cartoon for the newspaper.

“I think that Dwayne Booth creating an editorial cartoon for The Horizon will be a great experience for the students and for himself,” Rosen said.

After “The International Power Hour” on Wednesday, he will be working on the cartoon in the Horizon Radio station in the University Center. Booth will be sitting with his back to the window. People walking by the station can watch him create the cartoon.