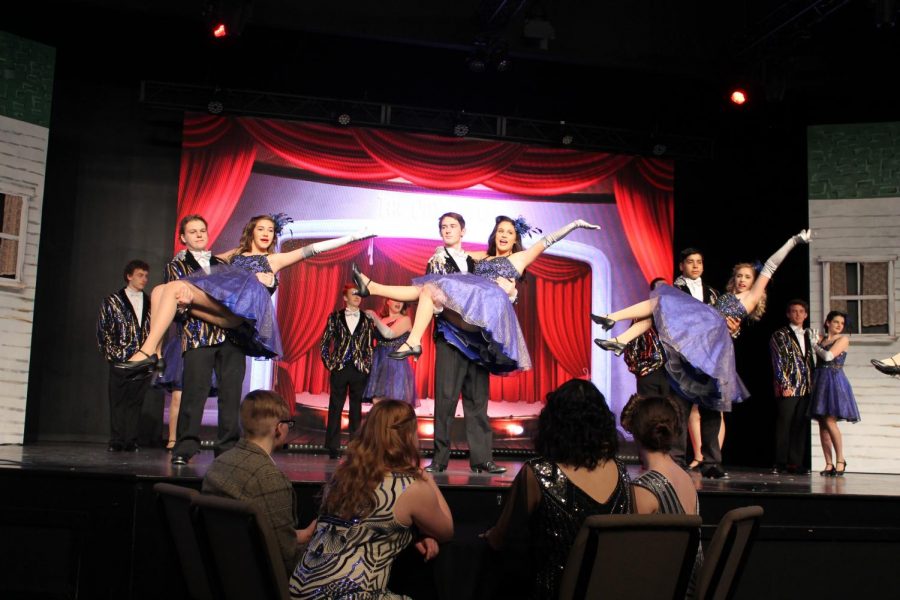 Connor Steveley, a Madison Theatre senior who is both the stage manager for the production and also plays a role in the singing and dancing ensemble, agrees that there is a lot of pressure on this specific production from both the technical perspective and theatrical perspective.
“We’re getting judged, so that’s obviously stressful,” he said. “This show is the first big musical production of the season that Madison is producing this year as well, so that’s also stressful.”
Madison Theatre senior and stage crew chief Ash Dunham stated that the hardest part of “Holiday Inn” from a technical point of view is that there are so many props and actors in this production.
“It’s so intricate and different from other productions we’ve done. With ‘Tarzan’ and our other productions we’ve done recently, those were make-believe,” they said. “This show is more real, so it’s definitely a change.”

Plenty to Be Thankful For

Even though there can be stress and doubt that stems from the pressure of being judged and being the first high school in the state to do this production, the Madison Theatre students and directors have stayed positive throughout their “Holiday Inn” journey.
“We just try to keep positive vibes,” said Maddie Felts, a Madison Theatre senior who plays the role of Louise Badger in the production. “We just try to get the show to be the best it can be.”
Hall said that theatre has been a very positive aspect of his high school career.
“It’s a really great environment,” said Hall. “I think that a lot of people have matured and become better individuals through theatre.”
From a directorial perspective, Kelsey stated that even though the stakes are high, he is not necessarily more stressed about this production than any of the other productions he has done.
“I want my students to perform at their best for every production,” Kelsey said. “Of course, I’m hoping they are at their top when the judges are watching.”
Torline said that her favorite part of theatre is getting to experience the journey of a production from auditions to live performances.
“I love when I get to see the audience enjoy the show that we have been preparing for months,” she said. “I also love watching our students bring the show to life and transform into these fun characters.”
As their “Holiday Inn” journey comes to a close, Madison Theatre can expect to see nothing but “Blue Skies” from now on.
“Holiday Inn” Information
Madison Theatre’s production of “Holiday Inn” ran through Nov. 17 at North Madison Christian Church. Madison Theatre’s upcoming production of “Newsies” will run at the North Madison Christian Church from March 13-15, 2020.
Irving Berlin’s “Holiday Inn” is based off of the 1942 movie of the same name and tells the story of Jim Hardy as he attempts to open up his very own holiday-themed hotel. With the help of Louise Badger and Hardy’s friends from his old show business days, he is able to accomplish just that. Linda Mason, a performer-turned-schoolteacher who lived on the farm where Hardy is trying to open Holiday Inn, comes along and quickly becomes Hardy’s love interest. Ted Hanover, Hardy’s former best friend, and Lila Dixon, Hardy’s former fiancée, make appearances along the way that tend to complicate the situations during the production.Memorable Irving Berlin songs such as “White Christmas,” “Blue Skies” and “Heat Wave” are all included in this production.